Following sold out runs on Broadway and the Young Vic, and winning a Tony Award for Best Musical Revival, Daniel Fish’s bold interpretation is coming to the West End for limited run in 2023.

Forget what you think it is… this is Rodgers & Hammerstein's Oklahoma! reimagined and re-orchestrated for the 21st century.

Oklahoma! tells a story of a community banding together against an outsider, and the frontier life that shaped America. Seventy-five years after Rodgers and Hammerstein reinvented the American musical, this visionary production is funny and sexy, provocative and probing, without changing a word of the text.

This production contains fog, loud gunshot effects, moments of darkness, and violence. Children under the age of 4 are not permitted in the theatre.

Oklahoma, the beloved Rodgers & Hammerstein musical, is making its return to the West End. Following sold-out runs in New York and London’s Young Vic, the dazzling revival comes to Wyndham’s Theatre from February 2023. Oklahoma was a revolution when it first debuted to awestruck audiences 80 years ago – now it gets a new lease of life in Daniel Fish’s production. Re-orchestrated and reimagined, this is not the Oklahoma you remember, but it’s certainly a show you’ll never forget.

Book now to experience Rodger and Hammerstein’s take on frontier life, packed with classic songs and every word of the original text.

Outside the southern town of Claremore, in a small farming community, farm girl Laurey Williams is caught between two men – cowboy Curly McLain and farmhand Jud Fry. With the community gearing up for a box social, romantic entanglements are plenty and young emotions are running high. Experience a taste of frontier life in 1900s America and lose yourself in the gripping story of a community who bound together against an outsider…

First written by Rodger and Hammerstein 80 years ago, Oklahoma helped to redefine musical theatre and forever change the way that musicals are written. Daniel Fish’s production takes that spark of revolution and nurtures it into a show that will still manage to amaze audiences all these decades later.

Oklahoma is packed with Rodgers & Hammerstein classics that have captured hearts for 80 years. From ‘The Surrey With The Fringe On Top’ and ‘People Will Say We’re In Love’, to ‘Many A New Day’ and ‘I Can’t Say No’, Oklahoma offers countless memorable tunes. The show’s opener ‘Oh What A Beautiful Mornin’’ remains a musical theatre classic, whilst no one can resist that rousing finale, ‘Oklahoma’.

Oklahoma was originally written by the iconic creative team of Richard Rodgers and Oscar Hammerstein. This was the first musical that the duo wrote together. They would go on to pen classics such as Carousel, The King and I, and The Sound Of Music. Rodgers and Hammerstein are often credited with helping to invent the ‘story song’ style of musical theatre writing, in which songs help to propel the narrative of the show and serve a purpose in the plot. The Oklahoma musical songs are a fantastic early example of this style of writing.

Oklahoma is based on the play ‘Green Grow The Lilacs’ by Lynn Riggs. The production features the original choreography from 80 years ago, by Agnes De Mille. Oklahoma is directed by Daniel Fish, who was nominated for a Tony Award for Best Direction of a Musical for his work on this production.

Believe the hype – this spectacular revival is going to be an unmissable West End event. Catch it as it comes from the Young Vic to Wyndham’s Theatre from February 2023. The show will run for a limited period, so book tickets now to avoid disappointment and experience a production 80 years in the making.

Rodgers and Hammerstein has never been so sexy

The corn cobs alone are worth a thesis

Lives up to the thirsty hype

An extreme, sensory experience, that will stay with you for a good while afterwards

Stark and sparse – Oklahoma with a snarl

Stripped back version is the best revival yet

Stirring singing in a reworked classic

An innovative but unsettling revival 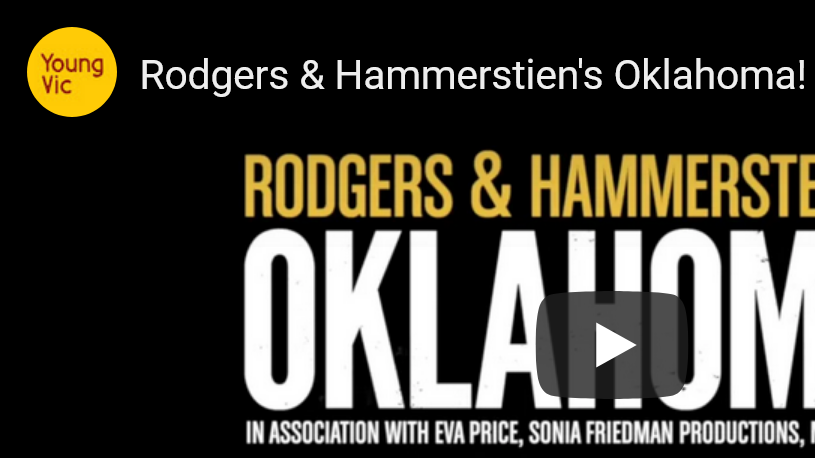