Tess and Liam are determined to get off the planet at any cost. On paper, they're the perfect applicants for Britain's intergalactic relocation project: they’re young, fertile, and their queerplatonic relationship might even pass for heterosexual bliss. All that’s left is to get past Mary and the interview…and if they have to do one or two extra things

to impress the panel, isn’t it worth it to avoid the apocalypse?

It’s the perfect time to see a new play by an emerging asexual playwright, featuring a dynamic asexual protagonist, and asexual and bisexual solidarity IN SPACE.

Mission Creep began as a short play in early 2018, making the rounds at scratch nights hosted by Cuckoo Bang Productions, Controlled Chaos UK, and Unmasked Theatre. With their support, it was developed into a full-length play.

Good theatre should both entertain and educate, and this succeeds on both counts, opening our eyes and offering a different perspective on the world 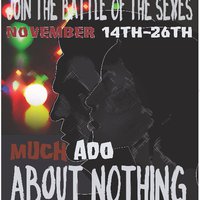