My new one woman show lifts the lid on all the little boxes that are created for us.

Joann Condon is a British actor. She started in theatre and went on to have has some fantastic roles in fabulous UK comedies and sitcoms such as 'Little Britain', where she featured as Fat Fighters attendee 'Pat'. She has also performed in 'Edge of Heaven', 'The Office' , 'Cradle to Grave' and 'Harry Hill's Shark Infested Custard'. In 2019 she appeared in 'Dad's Army The Lost Episodes'. Little Boxes is the first time she has written and starred in her own production.

AlphaMums is a new female led production company that Joann Condon and Leonie Rachel have set up in order to support their writing and performing. We feel that the voice of the middle aged female could be much stronger in entertainment, and we want to be able to share our knowledge and experiences in this format. As well as 'Little Boxes' we are currently writing a sitcom for children called 'CINEMARE'. So, watch this space... 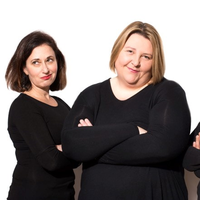