As well as being a skilled musician and an award winning entertainer, Desmond O'Connor is a trained hypnotherapist who is exploring ways in which hypnosis can be used to create transformative entertainment experiences.

Zoie Kennedy is a well-known actress and celebrated story teller who has been using improvised stories as a conduit to healing and personal development through her work with Desmond O'Connor and as one half of The Shadow Travellers, who have performed at Glastonbury, Latitude and the ICA.
Alicia Davies is a percussionist and sound-healer who has led hundreds of workshops using powerful techniques that have been handed down over thousands of years.

Together, the company have the simple aim to shift, transform and enrich the lives of every audience member who buys a ticket and steps through the doors of Hypnagogue.

*This show uses hypnotherapy and gong healing. Not suitable for pregnant women or those with pacemakers. Those clearly under the influence of drugs or alcohol will be refused admission for their own physical and mental safety. 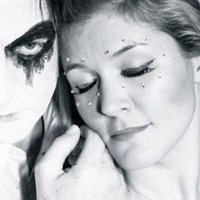