Lyn Gardner at VAULT Festival
26 November 2019  ·  Follow on Stagedoor
“I like the sound of Krystina Nellis’ Glitch about a female video game player.”

Sutward's 'diagnosed weirdo', Kelly, loves video games and doesn't love Sutward, or change. When a gaming contest comes to town, Kelly senses opportunity to save her sick Dad... and herself.

Krystina Nellis is currently a member of the Soho Writer's Alumni Group, having been a member of the Soho Theatre Writer's Lab in 2018-9 where she developed Glitch. She graduated from Royal Central School of Speech and Drama's MA Writing for Stage and Broadcast Media in 2017, has presented work at scratch nights in London and performed improv and sketch comedy with Hoopla. Krystina started her performance career in Cambridge, where she performed in Phedre, Remembrance of Things Past and Twelfth Night (as Malvolio).

Callie Nestleroth is a theatre maker, director, and script reader from Washington DC, now based in London. Callie is Artistic Director of The Heroine's Chronicles. Member of the 2019 Lincoln Center Director’s Lab. Training: MFA Royal Central School of Speech and Drama; Advanced Directing at the National Theater Institute.

Unique and heartfelt depiction of autism 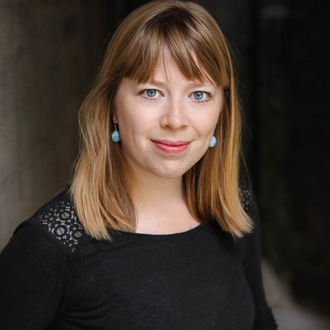