Townies have decided they want a lie in, so they’re building a new high-speed railway. Issue is, it’s going right through Barbara Honeybone’s house, and she ‘ent having none of it. Barbara’s grandson Peter works for the townies and it’s his job to convince the village that having a two-tonne bullet hurtling through the cabbage patches will actually be for the best.

Then there’s Harry, Barbara’s younger grandson, he ‘ent that bothered about trains, he’s only got eyes for Debbie Mahoney. But the only thing Barbara hates more than townies is the Mahoneys.

Welcome to Syresham, South Northamptonshire. It’s not quite the Cotswolds, not quite one of those posh villages Americans have in movies, but it does have Syresham’s Got Talent, the headline event of the village fair. There’ll be songs, dancing, magic, drag, a bit of wrestling, and Kevin’s doing a meat raffle (vegetarian option: two tins of Strongbow).

VILLAGE IDIOT is an audacious comedy. We hope it’s a bit like the other plays you’ve seen here, but less s**t. 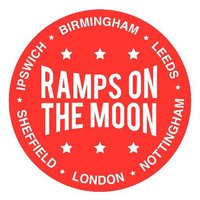