Unless you, yourself have been trapped in the eternal winter of an icy wasteland, renouncing all human contact, you will know the global phenomenon that is Frozen. Since its release in 2013, the much-loved Walt Disney animation, with its songs and story of sisterly love and redemption have brought joy and hope to people everywhere. Now you can get tickets to see the sparkling tale in a live theatre production. Frozen, the musical came to the Theatre Royal in London’s West End in September 2021 and is garnering five star reviews across the board. This ‘stunning musical extravaganza creates its own magic’ as Arifa Akbar from The Guardian puts it.

Frozen the Musical brings the much-loved Disney animation to life in London’s West End. The story of sisters Elsa and Anna comes to the stage with spectacular special effects and scenery capturing the icy magical kingdom of Arandelle.

Even if you know the story of Anna and her friends’ adventure to find her sister Elsa, the Ice Queen and free the land from a cold spell there’s plenty for you to enjoy in Frozen the Musical. There’s brand new music from Kristen Anderson-Lopez and Robert Lopez, writers of the unforgettable Let It Go, plus all the songs you know and love. Favourite characters such as loveable snowman Olaf and reindeer Sven aren’t forgotten either.

Frozen the Musical has been earning five stars from critics and rave reviews from audiences. Time Out London says ‘The musical version of Frozen is an awesome spectacle with more heart, depth and darkness than the film’. ‘No expense is spared for the special effects in Frozen at Theatre Royal Drury Lane starring Samantha Barks... it's absolutely terrific.’ – the Daily Mail, while the Mirror sent a ten year old super fan to review and their verdict – ‘I've watched Frozen more than 50 times - the Musical was more magical than I dreamed'. High praise indeed.

You don’t have to go to an icy wasteland for a Frozen ticket. The brilliant Frozen the Musical is in London’s West-End at the Theatre Royal Drury Lane. You already know that you are going to see an incredible production – Frozen the Musical’s Kristen Anderson-Lopez and Robert Lopez won Grammys for their writing, and Frozen musical London has won seven WhatsOnStage awards including Best Direction, Best Musical Direction, Best Choreography, Best Set Design and Best Costume Design.

Frozen the Musical is directed by the Tony and Olivier award-winning Michael Grandage, music and lyrics are by Robert Lopez with book by Jennifer Lee, Christopher Oram designed costumes and set, and choreography is Rob Ashford. Puppet design is Michael Curry, and Jeremy Chernick is special effects designer.

Frozen the Musical tickets are Up for Grabs Now!

Don’t delay to get your mittens on Frozen the Musical tickets. This is one ice-cool family favourite that young and old, and all the ages in between can fall in love with and sing along to, all over again. It’s not the time to Let it Go…

A richer and more complex beast

The company have knocked it right out of the park

The overall effect of this production really is magical

Spectacular musical that exceeds every expectation

A magical spectacle full of humour and heart

Barks' is a beautiful Elsa

A visual feast to warm even the coldest of hearts

The musical version of ‘Frozen’ is an awesome spectacle with more heart, depth and darkness than the film

Twinkling spectacle with a sincere drama at its heart

An immaculately executed theme park ride of a musical

The venue puts the show in the shade 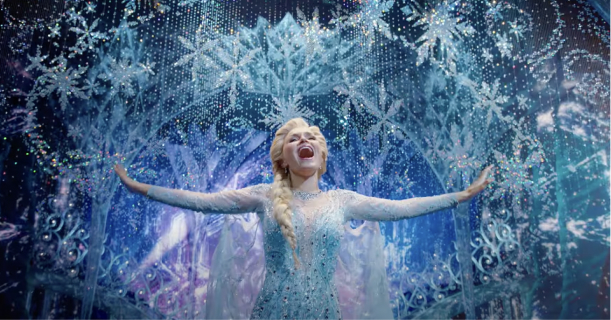 Lyn's Lowdown on a glut of ghost stories

Ask Lyn: What will theatre be like when it comes back?