DeadPlant Theatre return to Vault Fest with their new grotesque comedy horror which is sure to get udder your skin.

"You probably don't remember much before the great burn, I don't either. It's better that way, to not miss the way things once were.
Seems silly now, trying to cool the earth down with a big fire, but they were so sure it would work. The world was getting too hot they said, we were heading towards our doom they said. We had to blame someone, and of course they blamed the cows.
Once the droughts started they realised their mistake but it had gone too far. Five years before the fires burnt out, by then there was nothing left.
I can still hear the moos when I close me eyes. Burned alive poor buggers. Little did I know they were the lucky ones."

In a not too distant bleak and milkless future, a lone warrior woman arrives in the village of Cud seeking fellow survivors and shelter. But this village is full of dark secrets, and a band of mason like milky brothers living in crippling fear. For they still have a milkman, and the milk still cometh.

After last year’s sell out run of ‘The Service’ at the London Horror Festival, DeadPlant return with a surreal and nightmarish fable for the ages, exploring the effect the over farming of cattle has had on our environment, highlighting the horrors of the milk production process, whilst poking fun at our dependence on dairy. 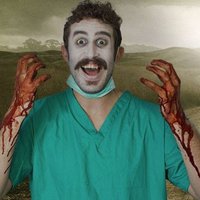