Mikhail Bulgakov was trained as a doctor and went to the front in the First World War where he was badly injured twice. To curb his pain, he began taking morphine. His addiction grew, and though in 1918 he gave it up altogether, the torture of that addiction never left him.

A young doctor, after his lover's betrayal, runaway to an isolated country village. To cease the pain he started to take morphine injections...
This is the confusing and harrowing story of a slide into morphine addiction.

In Russian with detailed English subtitles. 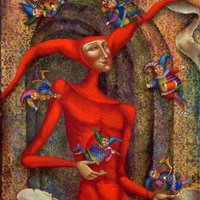