Venice is thriving, it is the trading centre of the world, where money can buy anything and where fame, love and women are commodities.

It is also divided by racist bigotry and abuse.

In the dark streets of the ghetto, a renowned Jewish financier agrees to lend a vast sum of money to a wealthy Christian merchant. But the money isn’t for him, it’s for a young stud, a Christian bounty-hunter who’s set his sights on a trip to a love island to win the prize of a wealthy heiress.

‘All that glisters is not gold’

Behind the glittering world of gold, lies the heart of Antonio the Merchant whose bond with the Jew Shylock, flippantly made, promises a pound of his own flesh if his ships fail to return.

Kate Littlewood directs this new production of Shakespeare’s strikingly contemporary play. Staged across two spaces, the audience will inhabit the segregated worlds of the play. 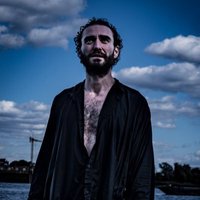