Lyn Gardner has chosen the sharpest, wittiest and most passionate reviewers from Stagedoor's buzzing community

There are millions of reasons to bless the day the internet was invented, including Nigella Lawson's Twitter presence, Does the dog die?, and just as importantly, the fact that everyone can now express their opinions on theatre, not just a tiny handful of newspaper critics. This summer, we launched a review competition to celebrate the liveliest, wittiest, most spirited new voices.

Leaving reviews on Stagedoor means you can keep a diary of what you’ve seen, and share your thoughts with other users. We were particularly impressed by writers who’ve developed their own distinct style: like Ellie Herda-Grimwood, who packs her reviews full of chatty personality and finishes up each one with an emoji. Her review of Cinderella reckons: “I thought Emerald Fennell’s script would be a BIT sharper but some good gags & I really liked the commentary on beauty standards, for all genders.”

Andrea Ma has mastered a pithy, insider-y tone that praised the “atavistic, tribal rites” of Hofesh Shechter’s Double Murder - this succession of glamorous murders is “one for Killing Eve fans”, he concluded.

And David Roy brings an impressive depth of analysis for David Mamet’s Oleanna: “The only downside in a riveting and well-acted two-hander is that one feels a little manipulated.”

Tom Bolton, Jim Burns, Josephine Wilson and Kevin Lloyd all delivered thoughtful reviews, that impressed for their way with a pithy plot summary: capturing a play in under 100 characters is no mean feat. All seven writers we’ve mentioned so far will each win a £15 theatre voucher to fuel their habit!

But Lyn Gardner’s choices for the winning two entries, which each get £100 in theatre vouchers, are all about energy, enthusiasm, and that bloodrush you get after coming out of a show you love.

Halima was so blown away by seven methods of killing kylie jenner that she freely admitted that capturing it in 100 words was all but impossible: 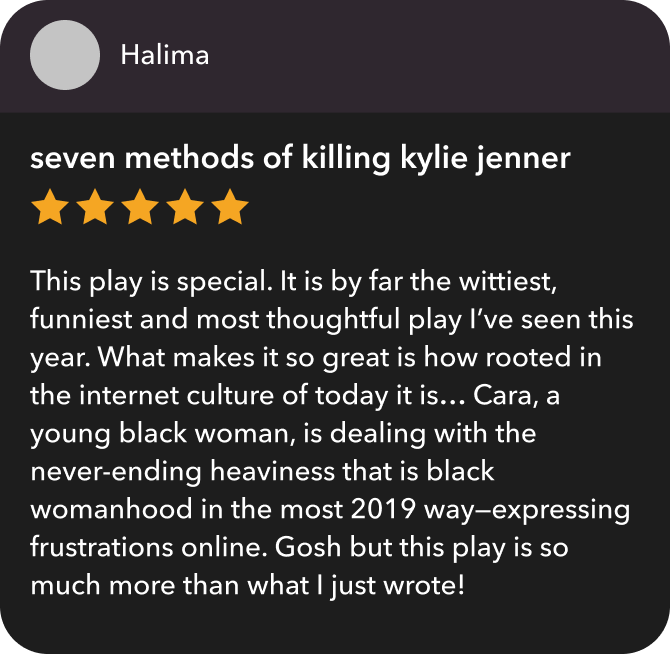 Halima wins the prize for best review of a play! And the winner of the best review of a musical is Antonia Georgieva, who filled her write-up of witty fringe musical Operation Mincemeat with wordplay and joy: 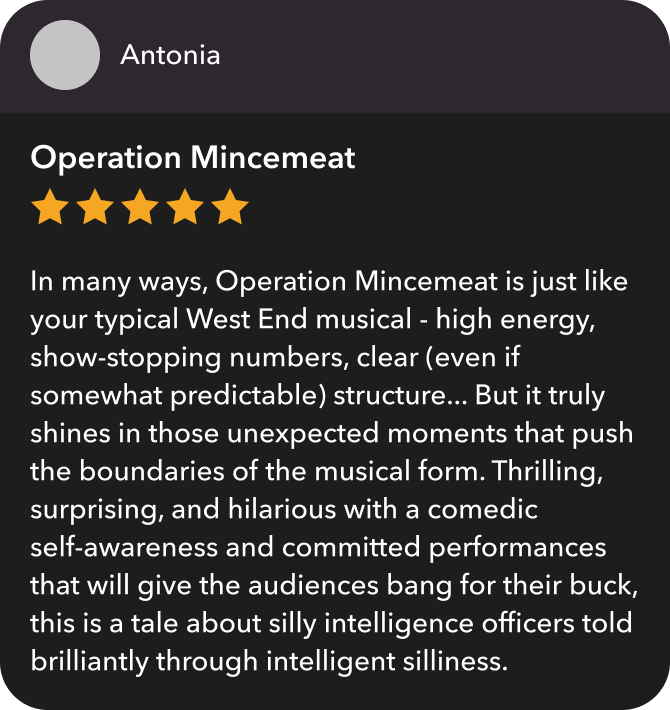 Huge congratulations and thanks to everyone who’s been filling Stagedoor with user reviews since theatres reopened their doors! We love reading your perspectives, and they bring a sense of community that’s so important after a year or two for theatre.

Would you like to get some tips on the art of reviewing? Read Lyn Gardner's article on how to write a review HERE