Lyn Gardner
19 October 2021  ·  Follow on Stagedoor
“Jane Austen is in the ascendancy in the West End with Pride and Prejudice (Sort Of) at the Criterion, but Louisa May Alcott is fighting back elsewhere with two versions of her classic novel on stage over the next couple of weeks. At the Park Theatre, Jason Howland’s musical version of the story of the four March sisters growing up in Civil War America gets its London premiere next month. But for a more radical take on the novel that has become something of a rite of passage for young women growing up, then look to South West London where the delicious feminist company Figs in Wigs re-imagine the novel and riff on it. They'll ask the pressing questions about why we cling to the classics, whether gender equality really advanced over the last 150 years, and is that a pressing issue in the age of climate emergency?”

Wild, irreverent and cosmically comical, Little Wimmin dismantles the traditional canon to make way for the doomed future of humankind, asking how we think about the past, what’s wrong with the present and what we’re going to do about the future… if there even is one.

The cast of five women transform the novel into a darkly funny, thought-provoking and surreal show with their distinctive punky and clunky perspective.

Prepare to laugh at the traditions of theatre and poke fun at people’s obsession with ‘the classics’ as the Figs use the story as their very own trojan horse, turning it on it’s head before dismantling it completely and mutuating it into an unrecognizable cartoon catastrophe that talks about climate change, astrology and the infinite nature of the universe.

Above all, it's phenomenally funny

Louisa May Alcott
Writer
Next 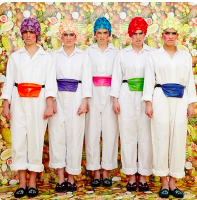