Cameron Mackintosh's acclaimed production of Boublil and Schonberg's Les Misérables at the Sondheim Theatre is still going strong after more than 30 years!
Les Misérables has touched countless hearts with its tale of justice, injustice, love, redemption and revolution. Featuring the songs I Dreamed A Dream, Do You Hear the People Sing, Bring Him Home, and many more – it’s a musical you mustn't miss out on.

Do you hear the people sing? Singing the song of angry men? It is the music of the people who will not be slaves again!

Produced in 53 countries and 22 languages, and watched by over 130 million people globally, Les Miserables is the West End’s longest-running musical and the second longest-running musical in the world. Now showing at the specially-renovated Sondheim theatre, Cameron Mackintosh’s take on Claude-Michel Schönberg and Alain Boublil’s spectacular musical has been revamped for a 21st-century audience.

Set against the backdrop of the French revolution, Les Miserables follows ex-convict Jean Valjean and his ward, Cosette, from their destitution as an ex-convict and servant to their involvement in the 1832 Paris Uprising. Along the way, their fates become intertwined with iconic characters such as Javert, Fantine, Thenardier, Eponine, Marius, and Enjolras.

The Les Miserables musical in London is a two-time Laurence Olivier Award-winner for Most Popular Show and the show has won eight Tony Awards and four Drama Desk Awards on Broadway.

The Guardian gives the new London version five stars, saying “What a thrill – no, a privilege – it is to “hear the people sing” once more. This new version is less showy than the original; no longer a spectacle to lean back and admire but, instead, something more truthful and, ultimately, more moving. The battles, the poverty, the degradation, and the danger: all feel more relevant and real.”

The Daily Telegraph calls the Sondheim Theatre revival “a reborn dream of a production” while The Sunday Telegraph describes the “dazzling staging and megawatt performances.”

“Les Mis has a towering passion and operatic intensity,” says Time Out. “Not to mention absolutely belting tunes, in gorgeous multilayered vocal arrangements – that operate on a visceral, gut level.” The Times puts it simply: “Perfect theatre in a perfect theatre.”

The Les Miserables London musical remains faithful to the original and features all the classic numbers from “I Dreamed a Dream”, “Castle on a Cloud”, and “On My Own”, to “Master of the House”, “Bring Him Home”, “Empty Chairs and Empty Tables”, and the seminal song “Do You Hear The People Sing?”

Tickets for Les Mis are currently on sale until March 2023, with champagne, VIP, and corporate packages available.

Performances take place every Monday, Wednesday, Thursday, Friday, and Saturday at 7.30 pm, with 2.30 pm matinees every Thursday, Saturday, and Sunday. The show is two hours and 50 minutes with a 15-minute interval.

Get your tickets now to experience one of the West End’s most unforgettable evenings. 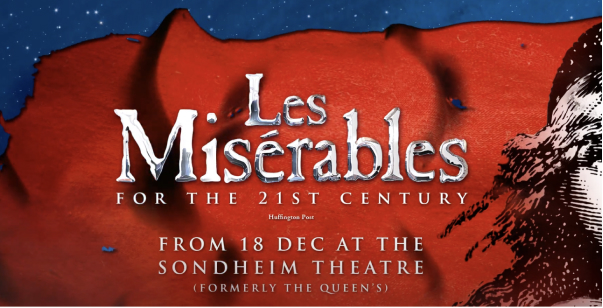