& Juliet is one of the freshest, funniest and most feminist new musicals around: don't miss out on tickets for this hilarious West End hit.

& Juliet is a jukebox musical packed full of songs by Swedish record producer Max Martin. You haven't heard of him? Don't worry, you've definitely heard his musical output before: he's penned songs like 'Hit Me Baby One More Time' for Britney Spears, 'It's Gonna Be Me' for the Backstreet Boys, and 'Roar' for Katy Perry... and they're brought to witty new life in this poptastic show.

Reviewers went gag for this pop spectacular. The Observer's ★★★★ review wrote that "& Juliet packs a lot of fun into its sharp, witty story of self-discovery", while Alex Wood's ★★★★★ rave in WhatsOnStage said that "If music be the food of love, then & Juliet serves up an all-you-can-eat buffet of the highest standard." Tim Bano joined the chorus of approval, too, writing that "It makes you want to hunt down the inventor of the jukebox musical and apologise to them for being a bit sniffy about the form in the past", and awarding the show another whopping ★★★★★.

But what makes & Juliet so special? A big part of its appeal is its inventive story, which follows William Shakespeare and his wife Anne Hathaway as they bicker over 'Romeo and Juliet', one of his most famous plays and one of the world's best known love stories. Only Hathaway argues that there's nothing so very romantic about a woman killing herself over a man. So instead, she creates a playful plotline that sees Juliet taking charge of her own destiny, and having a lot of fun along the way.

The creatives involved behind the scenes in creating this magical show include director Luke Sheppard, who helmed the London run of Lin-Manuel Miranda's In The Heights, alongside a book by David West Read and choreography by Jennifer Weber.

& Juliet is on at Shaftesbury Theatre, in the heart of London's West End, and is suitable for everyone ages six plus.

& Juliet explores Juliet’s tragic story – and rewrites her ending. We’ve all heard her tale of love, loss and untimely death, but what if, after Romeo falls on his sword, her story kept going? What would life look life if Romeo & Juliet was just… & Juliet? As it turns out, it would look pretty joyful. This hilarious, heart-warming sequel to the world’s most famous love story is a dazzling spectacle packed full of pop anthems by Swedish songwriter Max Martin. Book tickets now for a riotous good time.

And Juliet… the two words that have followed Romeo’s name for centuries. It’s a story we’ve all grown up with, but this new West End classic gives it a subversive twist. Anne Hathaway isn’t happy with her husband William Shakespeare’s latest tragedy, and decides to take the pen into her own hands. What if, instead of falling on that fateful dagger, Juliet packed her bags and went on a girl’s trip instead? With her friends by her side, and under Anne’s careful direction, Juliet sets out to get over her heartbreak in the best way possible – by dancing, singing and partying the night away. However, Juliet can’t outrun her story forever. And when destiny – and Romeo – come knocking, she’ll have to decide once and for all what her ending is going to be. Is there a place for Romeo & Juliet after all? Or is it better for Juliet to strike out on her own?

The & Juliet cast is led by Miriam-Teak Lee as Juliet, who previously starred in Hamilton and On The Town. Her portrayal of Juliet won Lee the Olivier Award for Best Actress in a Musical. She is joined by Cassidy Jonson as Anne, Oliver Tampsett as Shakespeare, Julius D’Silva as Lance and Tom Francis as Romeo. & Juliet is directed by celebrated West End director Luke Sheppard (In The Heights) and directed by David West Read, best known for his work on Schitt’s Creek. Its choreography comes from Olivier Award-winning choreographer Jennifer Weber.

The music and lyrics for & Juliet come from acclaimed songwriter and producer Max Martin. Over the last three decades, Martin has worked with the likes of Katy Perry, Britney Spears, Taylor Swift, Ariana Grande, The Backstreet Boys, Maroon 5, Christina Aguilera, Coldplay, and many more pop favourites. Martin is responsible for some of the biggest pop hits in recent memory, many of which are reimagined onstage, creating a sound both familiar and entirely fresh. & Juliet tickets

Experience this dazzling feast for the eyes and ears and bop along to all your favourite pop chart-toppers. & Juliet is now playing at the Shaftesbury Theatre in London’s West End. This jaw-dropping production is the winner of three Olivier Awards and six WhatsOnStage Awards and has received rave reviews from critics. Make sure you don’t miss out on & Juliet tickets at the Shaftesbury Theatre – book yours today.

Fun while it lasted

Incredibly entertaining and a whole lot of fun

Fantastic new musical featuring songs by Britney Spears, Katy Perry and others that picks up where Shakespeare’s play left off

A care-free, glorious ride that will have audiences humming tunes all the way home

A fun, feminist makeover of Romeo and Juliet chooses life – with a great pop soundtrack

The best party in town

Joyously daft musical riff on ‘Romeo & Juliet’, based on the hits of pop maestro Max Martin 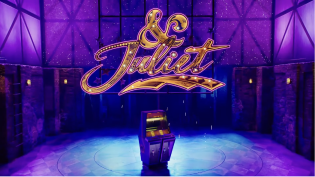 Winter Spectacular has arrived in the West End!

Shows to win over the theatre sceptic in your life