Lyn Gardner
12 September 2019  ·  Follow on Stagedoor
“They say the meek will inherit the Earth but it is often the strongest who thrive. We live in a world that admires strength and see sensitivity as a weakness. Poet and theatre maker Hannah Jane Walker (whose previous pieces include The Oh Fuck Moment and I Wish I was Lonely, which she co-created with Chris Thorpe) knows that she is one of the estimated 20 per cent of the population who have an inherited gene that makes them highly sensitive. What purpose might this gene have? Might there be advantages as well as the assumed disadvantages?”

Yet, 20% of the population have inherited a gene meaning that they are highly sensitive. This 20% often have low confidence, are in the lowest paid and least politically represented demographics. They are least likely to put their hand up to offer an opinion. Least likely to ask for a seat at the table.

Hannah Jane Walker is a highly sensitive person. In this show she sets out to look at the usefulness of sensitivity as something available to us all.

Through stories, poems and interaction, Highly Sensitive asks if what we think of as weak is in fact resilience and whether – as we move into the future – we have greater untapped potential than we realised.

Walker hits upon a fascinating question that reformulates how the show has discussed sensitivity. Should you should raise your children to survive/thrive in the world as it’s currently made, or should you try to make the world more nurturing to accommodate their difference? 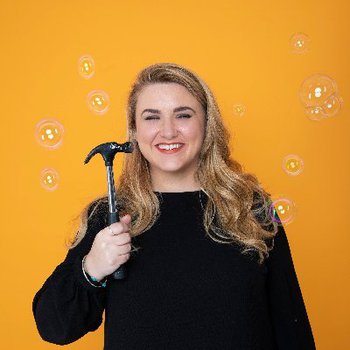 Roundhouse
Chalk Farm Road NW1 8EH London, UK · Get Directions
‐ ‐
No user reviews
Be the first to review it