Disney Theatrical and Cameron Mackintosh's multi-award-winning Mary Poppins the Musical has returned to where it was born, London's Prince Edward Theatre. Mary Poppins tickets are expected to sell quickly, as everyone's favourite nanny floats back to the West End stage. Take one look at the amazing cast list and you'll know there is no time to lose in securing your seats!

Join everyone’s favourite nanny: the magical Mary Poppins who takes to the stage for a Supercalifragilisticexpialidocious musical production of pure delight. Wowing audiences with songs such as Chim Chim Cher-ee, Let's Go Fly A Kite, and A Spoonful of Sugar, this is one family classic that still sounds as fresh as a daisy and has choreography and visuals brimming with joy and flair. With creative credentials like no other, this acclaimed production of Mary Poppins is definitely one to book tickets for. Widely regarded as the cream of West-End theatre, the critics love it: The Express “Joyous show is practically perfect in every way” saying “This Disney classic is just the spoonful of sensational sugar we all need right now.”, while The Telegraph judges it "The Most delightful West End show in a long time".

Mary Poppins is at the Prince Edward Theatre London. The tale of the mysterious, firm but loveable Mary Poppins who arrives one day in the Banks household to tame the two mischievous children Jane and Michael who have seen off all their previous nannies to the despair of their father. Mary Poppins employs her special magical powers to tidy rooms and takes the children on a series of magical adventures, with the help of her friend, chirpy chimney sweep Bert.

Mary Poppins is directed by the celebrated Richard Eyre, and co-directed and choreographed by Matthew Bourne, OBE, famed for his Swan Lake, the world’s longest ballet production. Mary Poppins is adapted from the stories by PL Travers and the Disney film musical, co-created and produced by Cameron Mackintosh, book is by Oscar-winning screenwriter, Downton Abbey creator, Julian Fellowes. Score is by Richard M Sherman and Robert B Sherman. James Powell is associate director, and Paul Gatehouse is sound designer. Scenic and Costume Design is Bob Crowley and Lighting Design is Natasha Katz and Hugh Vanstone.

Mary Poppins tickets are Up for Grabs Now!

Mary Poppins is a perennial feel-good family favourite that will have everyone singing along. Get your Mary Poppins London tickets for a fabulous London theatre production packed with unforgettable music, choreography and an enchanting story to make you smile.

The most delightful West End show in a long time

Stageful of sugar is a rapturous delight

It’s been a while, but this nanny goes down a storm

There lots to admire in this sweet-as-marzipan family show

An abundance of moving, dazzling moments

A spoonful of sugar is just what we need right now

Fresh, colourful, fun and sentimental, this Poppins is everything you want musical theatre to be

Richard Eyre directs with pace and panache, much helped by the choreography of Matthew Bourne

A lavish but old-fashioned revival 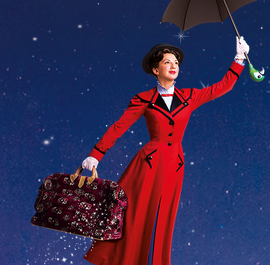 Stars on stage in London theatres in 2022