Lyn Gardner
15 September 2021  ·  Follow on Stagedoor
“Inspired by real-life accounts from the residents of a small Newfoundland town, who during the chaos of closed airspace during the 9/11 crisis invited 7,000 strangers from 38 diverted planes into their community, this unflashy, quiet musical is an unpretentious joy. It could be the West End show we all need at the moment. If Neil LaBute’s post-9/11 play, The Mercy Seat, suggested that in a crisis people take the opportunity to behave badly, then Come From Away suggests the opposite and that community spirit wins out. It was a sleeper hit but one that won four Oliviers prior to the pandemic, and it might just be the unassuming intimate tonic we all need right now.”

Winner of every major UK award for Best New Musical, Come From Away shares the incredible real-life story of the 7,000 air passengers from all over the world who were grounded in Canada during the wake of 9/11, and the small
Newfoundland community that invited these ‘come from aways’ into their lives.

As uneasiness turned into trust and music soared into the night, gratitude grew into friendships and their stories became a celebration of hope, humanity and unity.

Awarded the Tony® for Best Direction of a Musical, Christopher Ashley’s production guides audiences through a colourful and spirited cast of characters, brought to life by Olivier Award winning writing team Irene Sankoff and David Hein.

Come From Away London

Welcome to The Rock, the island of Newfoundland in Canada, where the small community of Gander is about to be descended on by the 7,000 global air passengers grounded in the wake of 9/11.

The extraordinary Come From Away musical has landed at the Phoenix Theatre in London's West End. It tells the real stories of the actual people involved in Operation Yellow Ribbon, a monumental effort by Canada to ground all airborne flights after the World Trade Center attacks — and shelter those who were on them. Simultaneously devastating and uplifting, Come From Away has been described as “the triumph of humanity over hate.”

Come From Away Cast & Creatives

Come From Away was written by husband-and-wife duo Irene Sankoff and David Hein after attending an Operation Yellow Ribbon reunion in Gander, Newfoundland. It’s gone on to be the longest-running Canadian musical in history, receiving multiple Best Musical awards around the world, four Olivier Awards, three Drama Desk Awards, and a Grammy nomination for Best Musical Theatre Album.

Director Christopher Ashley (The Rocky Horror Show, Sweeney Todd) won the Tony Award for Best Direction of a Musical in 2017 and now heads up the award-winning London iteration of the show.

The stellar ensemble cast has appeared in the likes of Oliver!, The Lion King, The Sound of Music, Chicago, Jersey Boys, Sister Act, The Rocky Horror Show, Into The Woods, Les Miserables, Mamma Mia, The Producers, Billy Elliot, The Curious Incident of the Dog in the Night, and Jesus Christ Superstar. It stars Jenna Boyd as Beullah, James Doherty as Claude, Mark Dugdale as Kevin T/Garth, Alice Fearn as Beverley/Annette, Kate Graham as Diane, Robert Hands as Nick/Doug, Jonathan Andrew Hume as Kevin J/Ali, Gemma Knight Jones as Hannah, Kirsty Malpass as Bonnie, Harry Morrison as Oz, Emma Salvo as Janice, and Lejaun Sheppard as Bob.

Come From Away Reviews

Come From Away London has received five-star reviews across the board. Dominic Maxwell of The Times describes it as “irresistible and inspiring” saying: “See the show in the West End. It’s a musical that gets everything right. I was still standing and cheering on the train home. The best new musical since Hamilton… funny, fast, and irresistibly open-hearted without being sappy.”

“A triumph of ensemble storytelling that packs an emotional punch,” says Marianka Swain of Broadway World. “Come From Away is this year’s must-see musical.”

“Go see Come From Away!” says Douglas Mayo of British Theatre. “Five stars just doesn’t seem enough! [A] tour-de-force with an ensemble cast that is unequalled in the West End at this moment in time. Buy a ticket, suspend your disbelief and I guarantee you will walk out a better human being.”

Come From Away Tickets

Come From Away London is set to close in January 2023 so get your ticket now to avoid missing out. Performances take place at the Phoenix Theatre every Monday to Saturday at 7.30 pm, with additional 2.30 pm matinees every Wednesday and Saturday. The show is 110 minutes with no interval.

Grab your tickets and come on in. The door is open and the kettle is on.

Revisited in the wake of Covid, the wholesome, warming Canadian musical makes real-time sense of a moment of all-consuming global upset

A flight from our troubles into total joy

This 9/11-set musical is a gently miraculous masterpiece

It's the mark of a great show that it seems to speak directly to the present moment, even if that moment is years after its original creation

It's a show with an impact that’s difficult to describe: it feels like it creeps up on you unawares, before flooring you with emotion

It has lost none of its power following this extended hiatus

A heart-swelling burst of joy, this Canadian gift is the musical that reminds us, even in the darkest of times, why life is worth living, and is unlikely to leave a dry eye in the house

This is a moving, irresistible show that unapologetically champions kindness

In the end its defining features are charm, energy and a real generosity of spirit, and audiences are left with a nagging question: in a situation like the one the people of Gander faced, would we do the same?

A necessary corrective to our traumatic times

I think in a time of true panic when we are all searching for any source of human support, the impact of Come From Away will feel far stronger today in London

Most importantly of all, it has a feelgood factor that simply doesn't let-up. In divided times, that's a powerful antidote indeed

Kirsty Malpass
Bonnie and others

Kate Graham
Diane and others

Mark Dugdale
Kevin T/Garth and others

Harry Morrison
Oz and others

Robert Hands
Nick/Doug and others

Gemma Knight Jones
Hannah and others

James Doherty
Claude and others

Alice Fearn
Beverley/Annette and others

Jenna Boyd
Beulah and others

Emma Salvo
Janice and others

Lejaun Sheppard
Bob and others 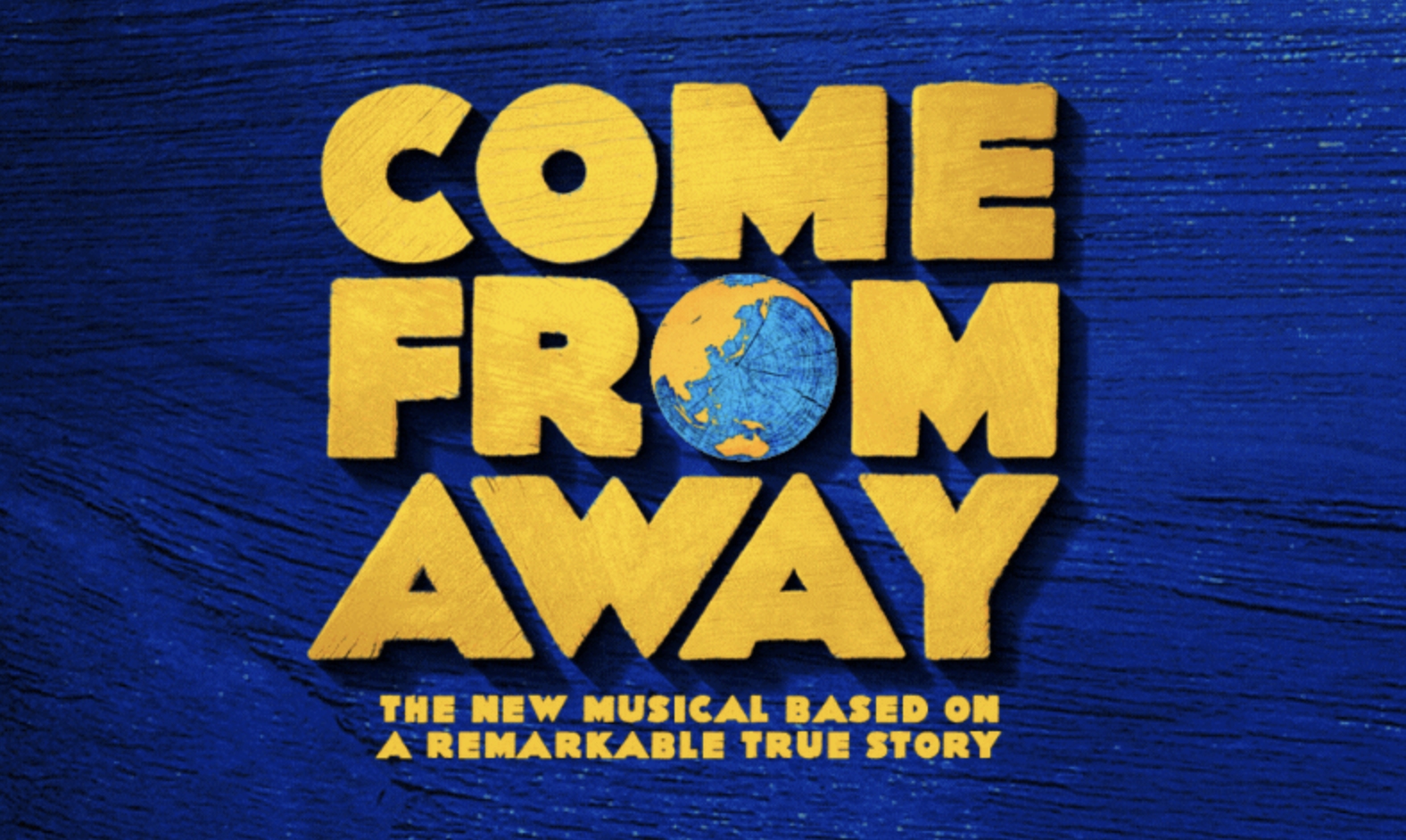 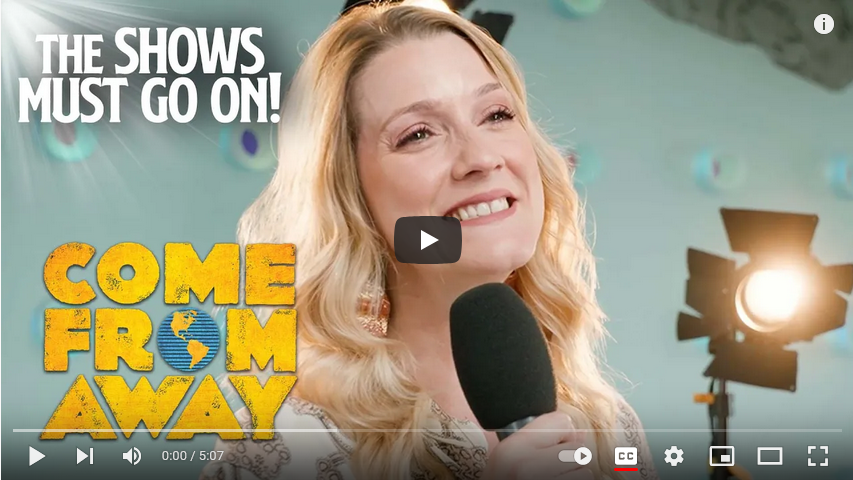 Lyn's Lowdown on Come From Away