Featuring top UK impro talent from such Olivier Award-winning productions as Showstopper! The Improvised Musical, Austentatious and Mischief Theatre, it is interactive theatre at its best, with the audience playing a key role in a night of games, scenes, sketches and songs – all improvised from their suggestions.

Between them, they have also had multiple appearances/writing credits on BAFTA Award-winning television and radio shows including In My Skin, People Just Do Nothing and Mongrels (BBC3); The Goes Wrong Show (BBC 1), Man Down and Sally4Eva (Channel 4); I’m Sorry I Haven’t A Clue, Sarah Millican’s Support Group, The Unbelievable Truth and The News Quiz (Radio 4).

'It will make you laugh, cheer and cry all at the same time' ★★★★★ Broadway Baby 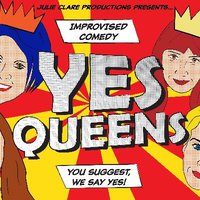