It is winter time and cold enough to snow. Otto lives at the edge of the Dorset village of Piddle under Puddle. He’s been invited to the annual Christmas party hosted by the chatty baker, and old school friend, Maggie. It isn’t that he doesn’t want to go, it’s just that he is very shy. He has decided to stay home on his own not talking to anyone, but one day a cheeky robin arrives and gradually a friendship develops which sees them singing duets and drinking tea together. When the robin goes Otto realises how lonely he has become and how he must be brave and step outside and make friends.

The show features a beautiful hand made puppet (by Polly Beestone), an original soundtrack and songs played by Otto on his banjo (composed by Angel Exit regular Tom Ball), and stunning design by Sarah Dicks (AUB graduate, The Ballad of Martha Brown, Cirque Bijou, Battle for the Winds). Otto is played by Edward Day, and Lynne Forbes, co-artistic Director of Angel Exit Theatre operates the robin and plays Maggie. The show is directed by Tamsin Fessey, co-artistic director of Angel Exit Theatre. During the development stage at Lighthouse, Angel Exit Theatre were joined by children’s book author and illustrator Alexis Deacon (Kate Greenaway nominated, Beegu, Croc and Bird, While you are Sleeping) who helped develop the story. 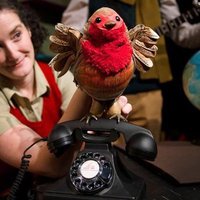