Lyn Gardner
15 September 2021  ·  Follow on Stagedoor
“Science and theatre have not always been obvious bedfellows, but in recent years we’ve seen some great shows inspired by scientific research. It’s helped that the Wellcome Trust has funded so many of these initiatives. But a science-led theatre company? Yes, that exactly what Curious Directive is, and over the last decade or so it has produced a string of shows grounded in scientific research but presented in the most artful ways including the use of VR. The latest, inspired by wall paintings dating back over 37,000 years that were found on Indonesia’s Sulawesi Island, explores human creativity and communication from the deepest past and our possible futures.”

c.37,500 years ago on Sulawesi, Indonesia, someone made a series of markings on the wall of a cave.

Elise is eight years old. She’s in primary school, making shapes on a piece of paper. In 35 years, Elise will travel to Sulawesi to decipher a set of geometric symbols, before floods destroy them forever. Her discoveries will shed new light on our collective need to communicate.

A splendid and layered reflection

A love letter to learning and a deep dive into wonder 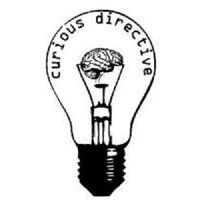