The Annas in The King and I

The Annas in The King and I

When Call the Midwife star Helen George walks out onto the stage at the Marlowe Theatre in Canterbury next February at the start of a nationwide tour of The King and I – including in and near London dates in Wimbledon, Dartford and South End
– she will be stepping into some pretty big crinolines. She will also be stepping into some very famous shoes.

George is playing Anna Leonowens, the Victorian governess hired to educate the children of the King of Siam, in the touring version of The King and I. Bartlett Sher’s celebrated makeover of Rodgers and Hammerstein’s gloriously scored musical was originally seen in London at the London Palladium in 2018 with American actress Kelli O’Hara reprising her Tony Award-winning Broadway performance. Sher was also behind the recent reinvention of My Fair Lady at the London Coliseum which addressed some of that show's classist and patriarchal attitudes in a light touch way. Similarly in The King and I he marries spectacle with thoughtfulness over some of the piece’s more dated attitudes, so ensuring everyone can have a good time.

London has hosted some celebrated Annas. They include Virginia McKenna, of Born Free fame, who played opposite Yul Brynner in 1979, and that doyenne of British musical stars, Elaine Paige, who starred in the 2000 revival, both at the Palladium. During rehearsals, Paige revealed to one journalist that the very first thing she did every morning after getting up was to practise the polka for 'Shall We Dance?' alone in her living room. Completely starkers.

The role of Anna was, of course, created for another British born actress ,Gertrude Lawrence, who starred in the original Broadway production opposite a then unknown Yul Brynner at the St James Theatre in New York in 1951. 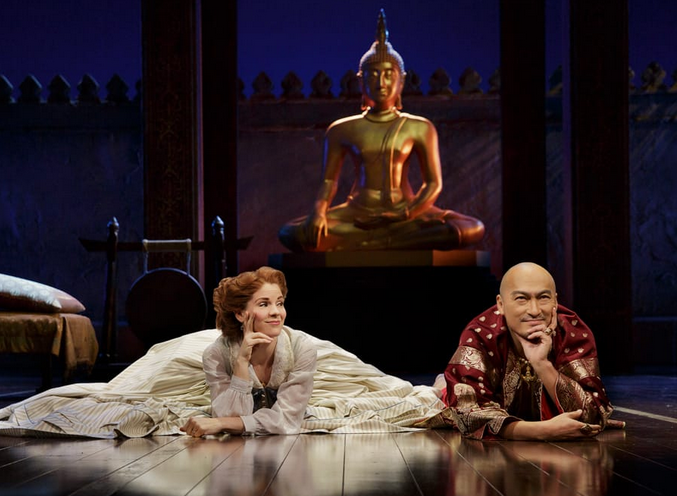 Kelli O’Hara and Ken Watanabe in the 2018 London Palladium production of The King and I. Credit Paul Kolnick.

It was a triumph for Lawrence – she won a Tony Award for Best Actress in a Musical – but it was also her swansong. Suffering from undiagnosed liver cancer, she fainted after a matinee in August 1952 and died three weeks later. She was buried in the golden dress she had worn in The King and I.

The sumptuousness of the costumes is part of the role. Maria Friedman, an admired Anna in a less admired Royal Albert Hall staging in 2009, was described as by critics as looking like “a giant fondant fancy” and “an inverted exotic mushroom.” The sheer weight of her dresses caused a problem for Sally Ann Howes when she starred in the West End revival at the Adelphi in 1973. Howes had played Truly Scrumptious in the movie of Chitty Chitty Bang Bang but playing Anna was far harder work. Oxygen was on hand in the wings for her and co-star Peter Wyngarde after their Shall We Dance? number so they could immediately give an encore.

Kelli O’Hara was not the first American actress to play Anna on British soil. The star of the 1980s’s TV series Hart to Hart, Stefanie Powers, played Anna during a UK tour in the mid-2000s. But it’s a role that British actresses have made their own both in the UK and America, and George will want to stamp her own personality on the role which is associated with so many great musical theatre actresses.

The late, great Angela Lansbury may only have played the part for 24 performances on Broadway in 1978, but she proved more than a match for the King, and was rewarded with a nomination for a 1978 Drama Desk Award for Outstanding Actress in a Musical. 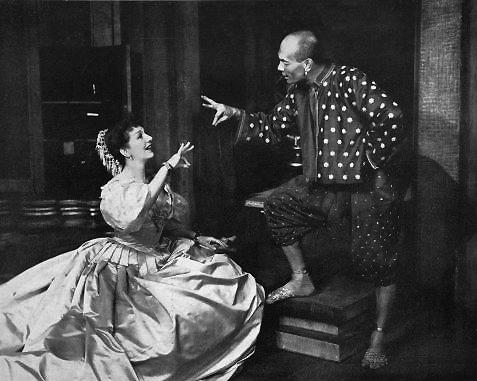 Gertrude Lawrence and Yul Brynner from a 1951 souvenir program for The King and I.

More recently, Laura Michelle Kelly, who originated the role of another governess, Mary Poppins, in the 2005 West End version, was perfect casting for a pre-pandemic North American tour for which she won appreciate reviews. Others have not been so lucky. That fine performer Liz Robertson played Anna opposite a lacklustre Rudolf Nureyev as the King on tour and in front of Ronald and Nancy Regan in the 1980s. When former child star Hayley Mills toured the US in 1997, she was praised for her unaffected, English rose acting but not for her singing skills. “Short on trills” was the Washington Post review headline.

Gertrude Lawrence was not the greatest of singers, but she knew how to put a song across, and so did Susan Hampshire, the Forsyte Saga and Monarch of the Glen star, who played Anna at Sadler’s Wells in 1991 with a mixture of charm and bossiness. The first London Palladium Anna, Virginia McKenna, was initially reluctant to accept the role, protesting “I’m not a real singer; I’m only an actress who can hold a tune.” She need not have worried: she won an Olivier Award.

While McKenna was playing Anna at the Palladium, not far away at the Prince Edward Theatre Elaine Paige was making her name in Andrew Lloyd Webber’s Evita. Two decades later, after considerable persuasion, she starred in a sumptuous revival. Paige may not have been a natural for the role of the strait-laced Anna, but she brought not just grit and gutsiness to it but also what one critic called “unsurpassable tone and clarity.” In 2001 she bequeathed her crinolines to Josie Lawrence who lent the character a mischievous comic edge.

There is one British Anna who got away. Julie Andrews, best known as Mary Poppins, was surely born to play the governess who wins the admiration of king and persuades a class of sceptical Thai tots of the existence of snow. Alas she never did. But she did make a CD version of the show in 1992. Listen on YouTube, and wonder what might have been. In the meantime, watch Helen George blossom in the role and charm audiences across the land.

Cover image of Helen George as Anna in The King and I which tours the UK from February of 2023. The full list of dates and venues can be found here.

The King And I
New Wimbledon Theatre
Opening 14 Feb