Theatre about theatre, and how we tell stories and why, can be bloody irritating and fuel those tabloid press stereotypes that theatre-makers are a load of self-obsessed luvvies.

But theatre is a microcosm of society and when it interrogates itself it can open up a window on the world. It’s the case with these two thought-provoking plays digital plays playing as part of the Theatre Uncut season on the Traverse website, Suhaiymah Manzoor-Khan’s A Coin in Somebody Else’s Pocket and Gbolanhan Obisesan’s Re: Exhibit.

Theatre Uncut’s slogan is “Political Theatre for Everyone Everywhere.” Since 2011 the company has been putting its money where its mouth is by commissioning playwrights at every stage in their careers to write short plays about social issues. The plays are then released, rights free, for anyone to perform anywhere in the world.

Still from A Coin in Somebody Else’s Pocket

Edinburgh’s brilliant new writing theatre, the Traverse, has had a long association with Theatre Uncut and it pays dividends here in two pieces that prod and poke at the purpose of art, its freedoms and constraints, representation and which take a sledgehammer to white liberal platitudes and assumptions.

Manzoor-Khan’s brief monologue even questions assumptions around what exactly a play is as she talks about being asked to write one. But why as a visible, opinionated Muslim woman has she been asked in the first place? Is there a burden being placed upon her by being asked, an assumption about who she is and what she represents which is “based on me being the reverse of the coin in someone else’s pocket.”

If she acquiesces, who are the performances for in a theatre culture where audiences are predominantly white and middle class? When people clap what will they be clapping? Manzoor-Khan turns these questions over and over like a coin in her pocket with both wit and irony in a piece that smashes perceptions of what a play can be as it reminds that “this girl can, but she doesn’t have to.” 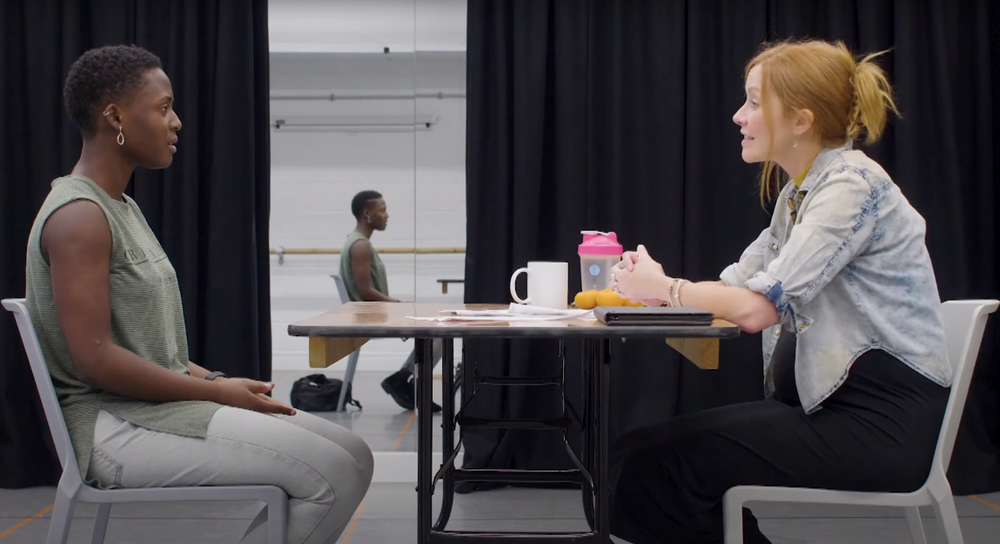 Still from Re: Exhibit

The 2014 controversary over the staged exhibition Exhibit B is the inspiration for Gbolanhan Obisesan’s Re: Exhibit, which presents a fictional encounter between a young black actor (Joyce Omotola) and the producer (Eva Jane Willis) of a show which claims to be exploring the effects of colonialism and hidden histories made by a white South African artist.

But does the artist have the right to use other people’s stories and explore Black trauma? The encounter between the producer and the actor is sharply realised as the former tells the latter “I’d rather you didn’t speak,” because this is a proposed show about the voiceless which doesn’t allow them to speak. Obisesan walks the tightrope between the satirical and the sorrowful and the downright angry with real finesse in a short, sharp shock of a play. Omotola and Willis are both sublime. I love the way that Willis says the word artist as if it always has a capital A.

While you are on the Traverse website, I’d suggest you check out In Someone Else’s Shoes, a short film made in Edinburgh during August when the city would normally be exploding with the fringe festival. Giving voice to six very different Edinburgh residents, it’s a wonderful little exercise in empathy and one which through the unconnected but intersecting lives of its protagonists offers a very different view of the city and those who live there than is normally glimpsed by theatregoers and makers during the festival.

The traverse festival runs until Sat 28 Nov. You can find these and other shows to stream here.