Ultimo (Rochelle Rose) is in the dock in a Hamburg court on trial for piracy.

He explains how he wanted to be a fisherman: only to discover that the Dutch and the English had fished the sea empty. He is pleading his case when his story is usurped by two Germany army officers, Pellner (Travis Alabanza) and Dorsch (Seraphina Beh), who promptly set off up the Hindu Kush without a paddle.

There are moments when you might wonder whether The Ridiculous Darkness at the Gate could be almost be too clever for its own good. But just when you reckon it might be a snake swallowing its own tail, its off-kilter humour and sense of playfulness suddenly makes you sit up a little straighter, listen a little harder and smile more broadly. 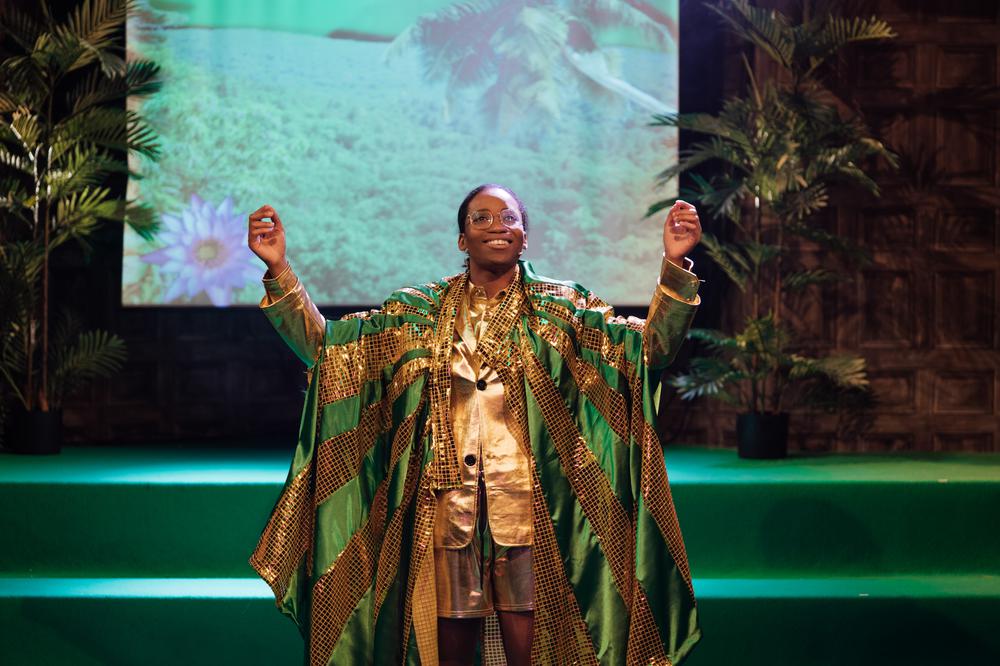 Shannon Hayes in The Ridiculous Darkness. Photo by Helen Murray

Director Anthony Simpson-Pike and dramaturg Nina Segal have taken a radio play by German playwright Wolfram Lotz, itself inspired by Joseph Conrad’s 1899 novella Heart of Darkness which then inspired Francis Ford Coppla’s Apocalypse Now, and given it a darn good shake. At least I think they have. There were times when I wondered whether Lotz even exists during this layered 100 minutes, which includes a fake interval complete with cucumber sandwiches and letters from the white author—in which his mum points up the absence of women in his story.

The real horror here is what easy prey we are to fakery and the way that narratives so easily take root and dominate even when they tell a partial truth or no truth at all. It’s a point neatly made in numerous ways, including in how we see the sound of the jungle being produced Foley style from a pretend sound booth (sound designer: Max Pappenheim) and how we receive that same sound. It’s underlined by the way that the superb four-strong cast—all femmes of colour—play a series of men, mostly white, and point out how, when their own stories are told in the movies, they are always played by Scarlett Johansson.

The stories of Ultimo and the German soldiers do eventually collide, but it is the journey and not just the destination that matters in a show that is both wryly aware of its own ridiculousness but also fiercely serious in the way it interrogates how stories are hi-jacked and warped. One of the most heart-breaking moments is when a man (Shannon Hayes) blames himself for the loss of his wife and child, both incinerated in a smart bomb detonation by someone sitting thousands of miles away in the West. Ultimo is in the dock because of colonial policies pursued by Western powers over hundreds of years. 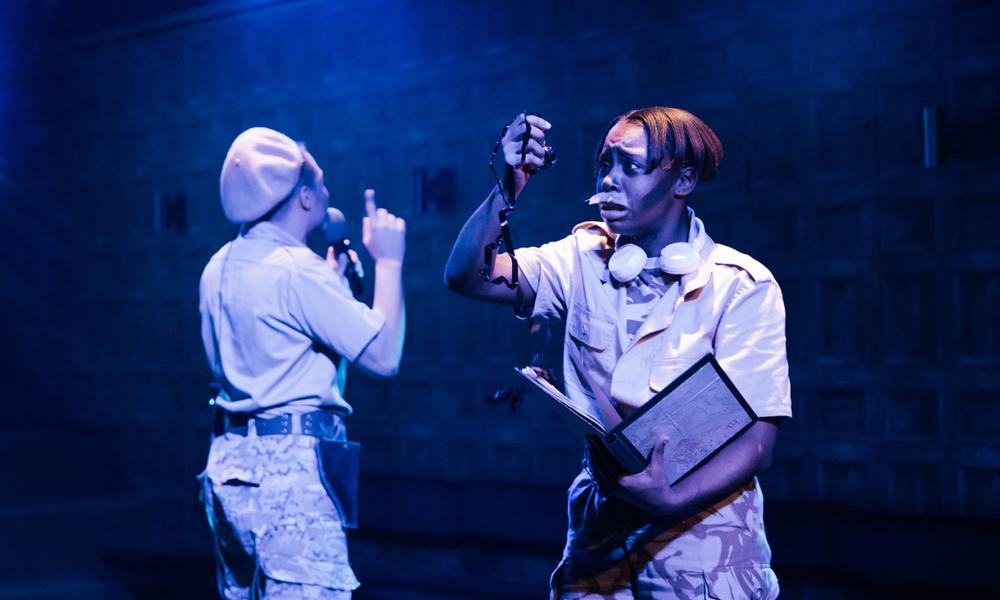 Our failure to see cause and effect, and how one untruth leads to another, is played out in a show—performed on Rosie Elnile’s green baize design— which skewers LiveAid and The Lion King, and challenges both male western hegemony and the way that Africa and Asia are only ever defined in relation to the west.

There are times when it feels a little heavy-going, and there were moments when I got lost on the journey. But the almost sketch-like format allows you to keep re-entering the story and picking up its threads even as it questions the representations of popular culture and the cultural and colonial baggage that weighs down so much storytelling.

The Ridiculous Darkness runs at the Gate Theatre until Sat 23 March. You can book tickets here..