It’s likely that a proportion of the theatre shows scheduled to open after the shutdown took place will eventually see the light of day.

The Royal Court has committed to staging its entire programme; Regent’s Park Open Air Theatre has completely shifted this summer’s season to 2021. The gorgeous Pitlochry theatre in Scotland has done the same. That’s dependent, of course, on these theatres, and others across the country, getting the government support they will require to survive. Otherwise it will be curtains for everyone.

But let’s be optimistic and assume that the government is not so stupid that its going to casually throw away the country’s entire cultural infrastructure that has taken decades to build. What then of those shows which were already up and running but whose runs were brutally cut short? Even if theatres do survive sadly few will be able to simply pick up where they left off.

The actor Bertie Carvel saw the gap and has plugged it with the Lockdown Theatre Festival which took place over the weekend on Radio 4 and Radio 3 and is now available on BBC Sounds for the next month. Original casts and directors transferred the stage plays to audio. What’s interesting about audio is that it is often closer to the original theatre experience than a filmed version of the play. Audio gives greater space for the audience’s imagination. 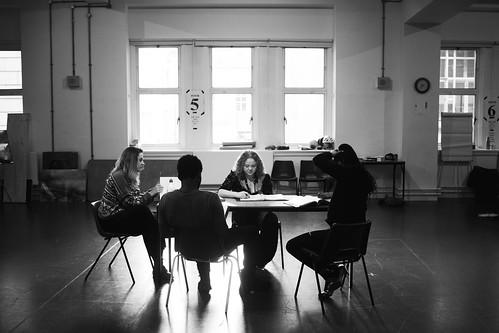 Rehearsals for Rockets and Blue Lights at the Royal Exchange manchester.

That’s certainly true of Winsome Pinnock’s Rockets and Blue Lights(https://stagedoorapp.com/available-online/lockdown-theatre-festival-rockets-and-blue-lights?p=14410), directed by Miranda Cromwell, which was in preview at the Royal Exchange in Manchester when the shutdown came. It could hardly be timelier as it focusses on Britain’s involvement in the slave trade and considers how the history books only tells you so much.

Operating across two-time frames from the 1840s to the first decade of the 21st century, it’s pretty demanding on the audience who have to keep track of the changing times without visual clues. But there is something fascinating about the act of listening to a play centred around a strong visual image: JMW Turner’s painting, Slave Ship, which depicts an 18th century slave vessel in which the still manacled slaves are being thrown overboard into the wild seas. “Why does he make something so ugly beautiful,” asks one of the characters. I didn’t know the painting and when I looked it up online afterwards, that line reverberated.

Pinnock knits together the stories of the elderly painter (Paul Bradley), a black sailor (Karl Collins) and zooms forward to the experiences of Lou (Kiza Dean), an actor making a movie about Turner who fights against a version of white-washed history that only tells the story from one perspective. Pinnock is a playwright who has herself too often been over-looked. Rockets and Blue Lights could hardly be more topical. It’s dense but rewarding. Urgent too.

EV Crowe’s Shoe Lady(https://stagedoorapp.com/available-online/lockdown-theatre-festival-shoe-lady?p=14409), directed by Vicky Featherstone, was at the Royal Court when the shut-down came. Katherine Parkinson plays Viv, a middle-class woman overwhelmed by the pressures of her life for whom the last straw is losing a shoe. The curtains falling down pushes her right to the edge.

Viv is part of the squeezed middle class. She is an estate agent, for god’s sake. Not a profession that invites sympathy. Yet Parkinson’s warmth ensures that we do have compassion even as the script dances around issues of guilt and privilege, highlights how class, self-interest and non-intersectional feminism leaves women, particularly white middle class women, isolated and as adrift as Viv is on her lonely odyssey across the city. Home is the loneliest place of all. Crowe’s writing is all jingle jangle. Many women get up in the morning look in the mirror and see a panicked Viv. Crowe conveys that panic brilliantly.

Family and its tensions features too in Mike Bartlett’s Love Love Love a play first seen in the wake of the financial crash but whose depiction of family history and the UK’s changing social history offers a fascinating portrait of generational inequalities as its counts the gains and the losses between each generation. It’s sharp as a pin on class and Rachel O’Riordan’s keen revival (at the Lyric Hammersmith at the moment of lockdown) lays on the savagery and the satire as we follow baby boomers Sandra (Rachael Stirling) and Kenneth (Nicholas Burns) over more than 40 years as idealism turns to cynicism, free love to free loading off capitalism. In an odd way, the chronological shifts in time that require wigs and costumes changes in the theatre, are more easily handled on radio because the audience’s imagination does all the work.

Georgia Green’s revival of Josh Azouz’s The Mikvah Project at the Orange Tree was the very last play I saw before the theatre shutdown. Azouz’s two-hander takes its name from the water filled Jewish ritual bath called a mikvah that is used for spiritual cleaning. At the Orange Tree we could see the baths where once a week thirty-five-year-old Avi (Alex Waldmann) and 17-year-old Eitan (Josh Zare) meet and strike up an unlikely friendship. Both are under-going crisis of masculinity and identity and the weekly time in the baths gives them some release. Until it doesn’t and their meetings bring their individual crises into focus.

I won’t spoil it for you, but there is a playfulness and a yearning operating here that is enormously appealing, and again while the absence of visuals and the naked vulnerability of the characters is a loss, the emotion is heightened and magnified by the audio. The less we see, the more we imagine.

The show is shorter than the time it takes some people to have a bath there is a lot going on that is submerged beneath the waterline. Very nice, and so much deeper than it appears.

You can listen to the Lockdown Theatre Festival here.