Despite its reputation as a hoary old warhorse—it's a play that's regularly staged by American high schools—Thornton Wilder’s meta theatre play about small town American comings and goings is rich both in its depiction of everyday life and theatrical possibilities.

There have been two revelatory revivals in recent years, at the Almeida in 2014 and Sarah Frankcom’s award-winning staging in the wake of the Manchester Arena bombings which became an unsentimental hymn to the people of Manchester.

The Gate’s Ellen McDougall’s is a hugely exciting director, but in moving to the larger arena of Regent’s Park Open Air Theatre she comes unstuck with this large cast revival which lacks theatrical vim or real heart. Even as the shadows lengthen and the dead start to rustle and talk, this never quite makes you tingle or feel this town could be our town.

With the exception of Emily (Francesca Henry) and George (Arthur Hughes), the girl and boy living next door to each other in Grover’s Corners in early 20th century New Hampshire, the characters are sketchily drawn in a play which takes its rhythms from small town life and its structure from the hatch, match and dispatch nature of all our lives. But that doesn’t mean that each and every character can’t be precisely detailed. We should ache for the vividly alive paperboy Joe Crowell (Terique Jarrett) who we know is doomed to die in WW1, or the town drunk Simon Stimson (Peter Hobday), and we should see the distinctions between each and every member of the Webb and Gibbs families. 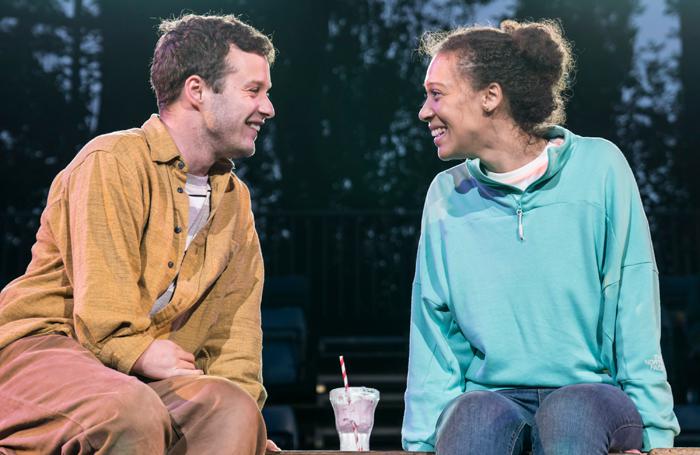 Arthur Hughes and Francesca Henry as George and Emily. Photo by Johan Persson

The production may yet find that depth of detail, and it needs it because while McDougall’s pared back, modern dress style neatly avoids any whiff of sentimentality it makes huge demands on the actors.

There are some nice ideas. In the second half Rose Elnile’s design which, with its onstage banks of seats turns the Open-Air Theatre from a horseshoe, comes into its own. The on-stage empty seats become grave stones, a reminder of centuries of loss and making absence present. In the final act the production also makes clever use of a costuming/set device that is the movie of equivalent of moving between colour and black and white. It’s neat, but it comes too late to bring this town to full, beating life.