If Maggot Moon and Anansi the Spider (Unicorn) are an indication of new artistic director Justin Audibert’s ambitions for the venue, then this theatre for young people is going to be a lively, stimulating place for both adults and children.

Under its last artistic director, Purni Morell, the Unicorn was dragged firmly into the 21st century, and Audibert continues that journey with two contrasting shows for different age groups that should fulfil all half term needs for parents and carers.

For nine years and above, tune into Jemma Kennedy’s smart adaptation of Sally Gardner’s 2013 dystopian novel set in a 1950s Britain which is now called The Motherland. It is as if Hitler won the war and the Nazis are now in control of an Orwellian world where people disappear and teenagers like Standish (James Newton), who is different because of Dyslexia and odd-coloured eyes, have reasons to be afraid. Not just of the bullies in the playground but of the regime itself. 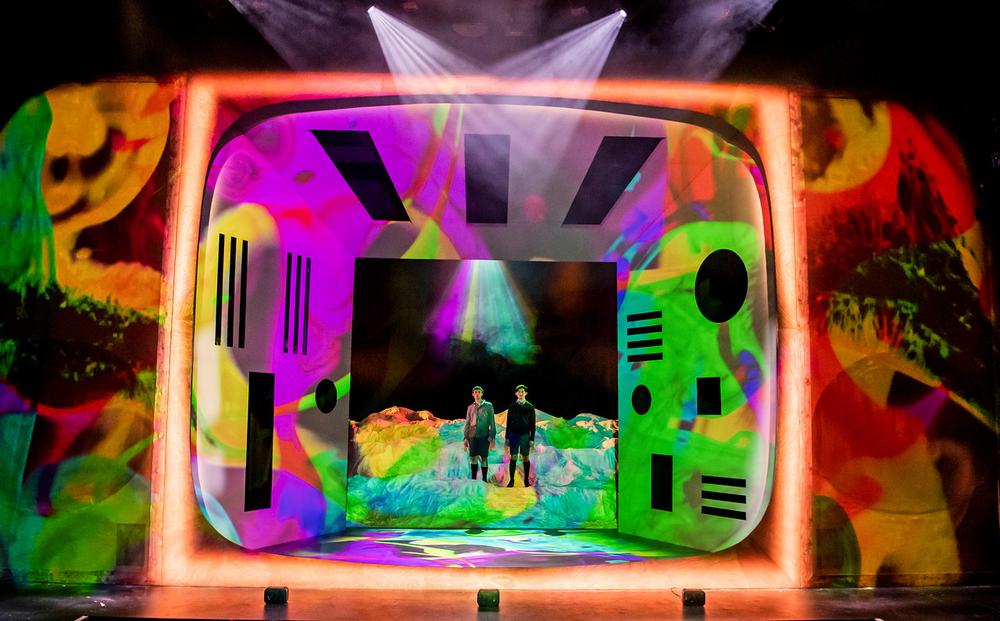 Standish finds an ally in new arrival Hector (James Day), and together they invent their own planet Juniper, a utopian place full of cola and ice-cream Cadillacs that is as technicolour as the Motherland is black and white. But as the Motherland plans the first landing of a man on the moon to prove its supremacy and military might, Hector goes missing. Where is he, and what lurks behind the high wall at the bottom of Standish’s garden, a place called the Forbidden Zone?

Very neatly designed by Lucy Sierra so it feels as if the entire thing is taking place in the back of an old-fashioned box TV, Maggot Moon feels simultaneously retro and bang up to date as it tells a rollicking story of love, heroism and standing up for the truth. It dances effortlessly around contemporary issues of conspiracy theories, fake news and surveillance and points to the fact that the gap between repression and democratic freedoms is often narrower than we might like to think. 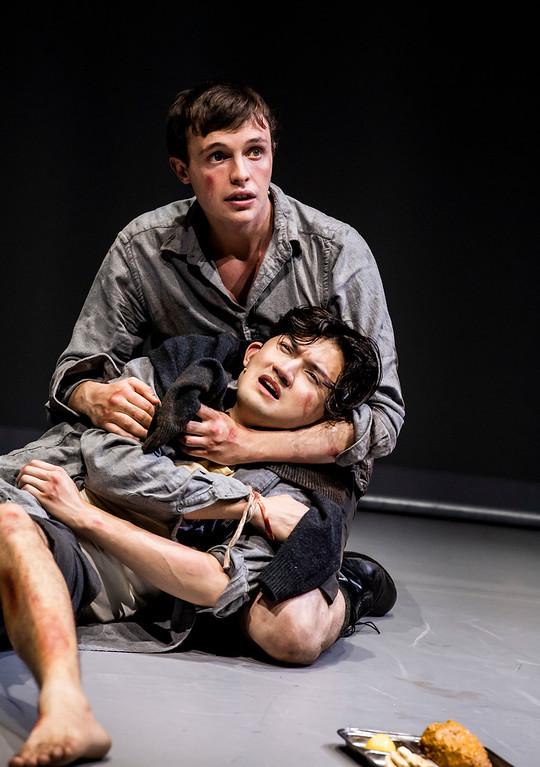 This is dense storytelling that keeps the audience on their toes and rewards attention. Jesse Jones’ nimble, beautifully performed production makes terrific use of sound (by Benjamin Grant) and hand drawn projections (Akhila Krishnan) not just for theatrical effect but to constantly remind us of the power of the imagination. It also reminds that there are different ways of seeing and experiencing the world and different kinds of cleverness. Good too to see a show for this age group that doesn’t try and fudge the fact that resistance comes at a cost: it refuses to deliver any fake happy endings.

Photos for Anansi The Spider by Craig Sugden

There are interesting ambiguities too in Audibert’s own retelling of Anansi the Spider. Aimed at 3-7 year olds, the way these yarns are spun may be a stretch for some in the lower end of that age range. But this is very much a show with legs, lots of mischievous humour and a distinct and welcome lack of shoving messages down its young audience’s throat.

Anansi, thinks that he is the clever one as he tries to collect all the wisdom in the world for himself, beg a free supper and let others pay the price, or eat his fill at two different parties at opposite ends of the village. But Audibert is cleverer still as he casts three women—sublime performances from Afria Abusham, Juliet Okotie and Sapphire Joy—to all play the puffed up, self-important male spider and spin a web of tales that make Anansi engaging without in any way condoning his despicable behaviours. Anansi is constantly undercut by the female performers and the show nestles very comfortably in territory between the comic and the scary.

The result is charming without ever being cloying, and the sounds and rhythms of the oral West African storytelling tradition are honoured as this trio of age-old stories are played out around designer Sadesysa Greenaway-Bailey’s gorgeous wicker-work tree that sits centre stage with a canopy of leaves like fat, green pillows.

Anansi the Spider and Maggot Moon run at the Unicorn Theatre until 27 Oct.

Tip: If you want to hear about more brilliant family theatre you can follow the Unicorn Theatre on the Stagedoor app. We'll make sure you see the Unicorn's productions in your personalised recommendations.