That’s because what I saw and what you might see will be entirely different. The premise is this: since March nine pairs of artists have been writing to each other, charting their experiences of lock-down and their feelings about the pandemic. But the letters have gone unopened. On the night they meet up online — with the audience watching — follow a series of instructions, open the letters and read the contents, and share a poem. As simple as that. An extra layer of surprise comes with a box that has been mailed to them that offers a few previously unseen props.

Over the coming three weeks you can see what comes from these live encounters with pairings that include Alex Austin and Nigel Barrett, Tim Crouch and Nadia Albina, Irfan Shamji and Elizabeth Chan, Phoebe Fox and Thalissa Teixeira, Kwame Owusu and Francesca Henry, Kaylia Meikle and Chris Thorpe, Annie Siddons and Joseph Akubeze and Helena Lymbery and Isabel Adomakoh. Mouth-watering, eh? 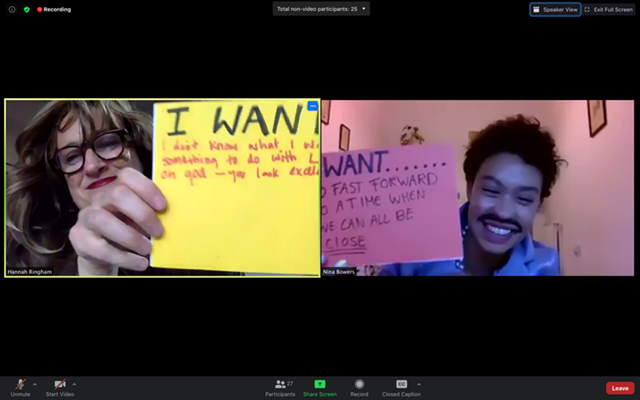 Still from live stream of Letters.

On Monday night Nina Bowers and Hannah Ringham, who you might have seen in Dear Elizabeth/Twilight: Los Angeles, 1992 and Unknown Island at the Gate, were the designated pair. Their live meeting came with all the honest, slightly bashful uneasiness that seems to accompany any Zoom encounter. If one of the things that you’ve been missing about theatre is its messy liveness, then this supplies it in oodles.

There were shared poems (Jane Hirshfield’s Hope and Love and Elizabeth Bishop’s The Fish), drawn on moustaches and funny wigs but despite the shared missives, what I missed was a real connection between these two people, the spark of bouncing off of each other, the profundity of two people having lived through the same pandemic but viewing it with very different perspectives.

There was a lovely moment in Nina’s letter when she talks about feeling “unsupported by the weather” but no digging by either of the women beneath that statement, and so much has happened since lock-down ended and those months now feel so far away that in some ways the letters sent now seem like reflections from teenage diaries viewed from the distance of many years. 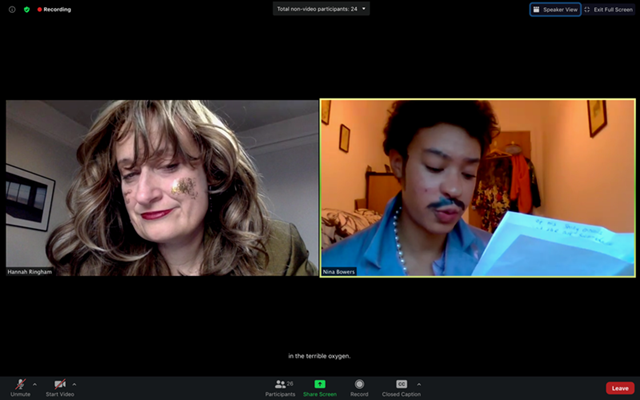 Of course, every single evening of the show will be different, and that is part of its appeal. Some pairings will no doubt feel combustible; others like Nina and Hannah’s meeting more delicate. No doubt some will be jokey and others serious. But for me on Monday night I felt as if I was watching something engineered rather than organic that lacked the naturalness of a conversation between two engaged strangers or the heft and content of a structured theatre show.

It fell somewhere in between, failing to deliver the intimacy and spontaneity you would expect when two such warm and distinctive artists come together in extraordinary times. But your lucky dip may prove far more fruitful.

Letters runs online from the Gate Theatre until Wed 7 Oct. You can book tickets here.