Kandinsky’s Dinomania takes place in a theatre—the New Diorama—but in Joshua Gadsby and Naomi Kuyck-Cohen’s design it also looks as if it might be taking place in a particularly tasteful funeral parlour complete with a pianist (Zac Gvirtzman) performing throughout.

The effect is of watching a silent movie with words.

The funeral parlour is appropriate for this story about old bones, dust and the early Victorian palaeontologist Gideon Mantell who, years before Darwin published the Origin of the Species, was already stirring up controversy with his discovery of a 165-million-year old tooth on the South Downs and his belief in evolution, or as he called it 'progression'.

It was a belief that challenged Victorian certainties, based on the assertion by 17th century cleric, Bishop James Ussher, that the world had been created by God a mere 6,000 years ago on October 23, 4004 BC. Possibly in the early evening around sherry time. One of the lovely things about Kandinsky’s show is its cartoonish humour which is slyly exacerbated by the performers—Janet Etuk, Hamish MacDougall, Sophie Steer and Harriet Webb—who play heroes and villains with equal relish. 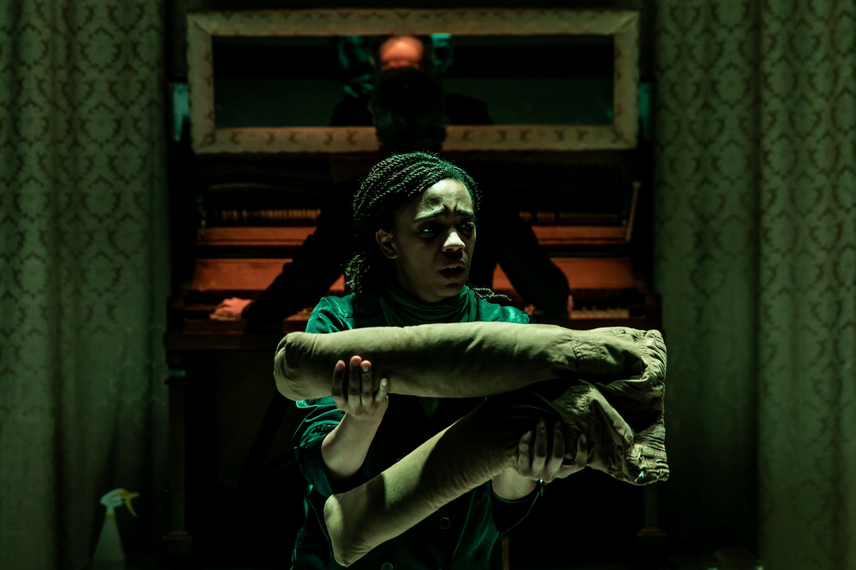 Janet Etuk in Dinomania. Photo by The Other Richard.

Dinomania takes its time to find focus, but approaches its subject with forensic care: initially concentrating on Mantell’s early life as the clever son of a cobbler who was given to drilling his son on the family’s ancient lineage. Later, his background and amateur status would be thrown back in Mantell’s face by the “gentlemen scientists” who dominated early palaeontology and who used the Bible and its Creation story as a means of bolstering and maintaining their own position in the social hierarchy. Sometimes clinging to old beliefs is far more comfortable than excavating the truth.

We live in a time of rapid technological and social change but we also live in a post-truth world. We appear to be constantly making progress and yet the the old structures of privilege remain intact. We know more than we ever have about the world and yet constantly ignore the evidence of what we might be doing to it. With our nostalgia for the past, are we so different from those early Victorians intent on maintaining the status quo, clinging to what they thought was certain because dealing with change is scary? 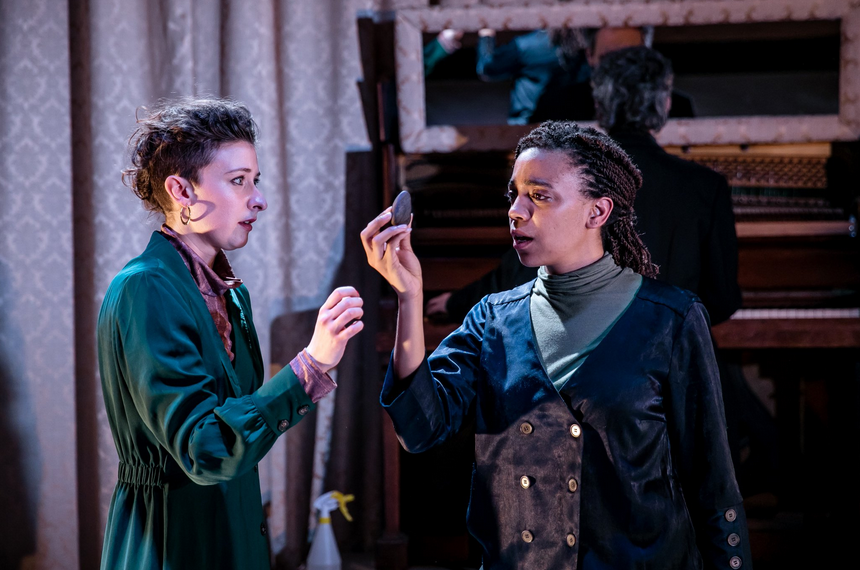 Sophie Steer and Janet Etuk. Photo by The Other Richard.

This is such intelligent work from a seriously talented company, but although the humour leavens it, it is still a mite doughy in the middle. It feels as if the effort to pack in so much information has created a structural wobble.

It’s only in its final 20 minutes, as Mantell’s obsession destroys his family, and Richard Owen—the man who coined the word dinosaur—moves centre stage that the piece becomes utterly compelling. You leave the theatre reminded that progress has to be fought for over and over again, and we are mere specks of dust caught in time’s sharp teeth.

Dinomania runs at The New Diorama until Saturday 23 March. You can find tickets here.