In this interesting epoch when the world is changing quickly, but time in lockdown can move very slowly, there can be an intention to devour the epic, that door-step novel which you have never got around to reading, or the six series box set.

But if the truth be told, while many of us have more time than ever we have less concentration than normal.

I’ve been trying to watch a fair amount of theatre on-line but there is a significant difference between watching a two hour show in the theatre, often in the dark with the eye directed towards the light of the stage and with your mobile phone switched off, than it is watching the same show on-line. Particularly when the filming flattens the experience.

As a result, I have been drawn to shorter on-line shows and films and I’ve had some good experiences about which I’ve already written about here on Stagedoor including Nottingham Playhouse’s Mass Bolero, Young Jean Lee’s We’re Gonna Die and Daniel Bye’s Going Viral.

So, here is another short but satisfying offering for all those Lin-Manuel Miranda and Hamilton fans who are devastated by the news that the movie version of the glorious In the Heights that had been due to be released in the UK on August 7 has been postponed indefinitely. 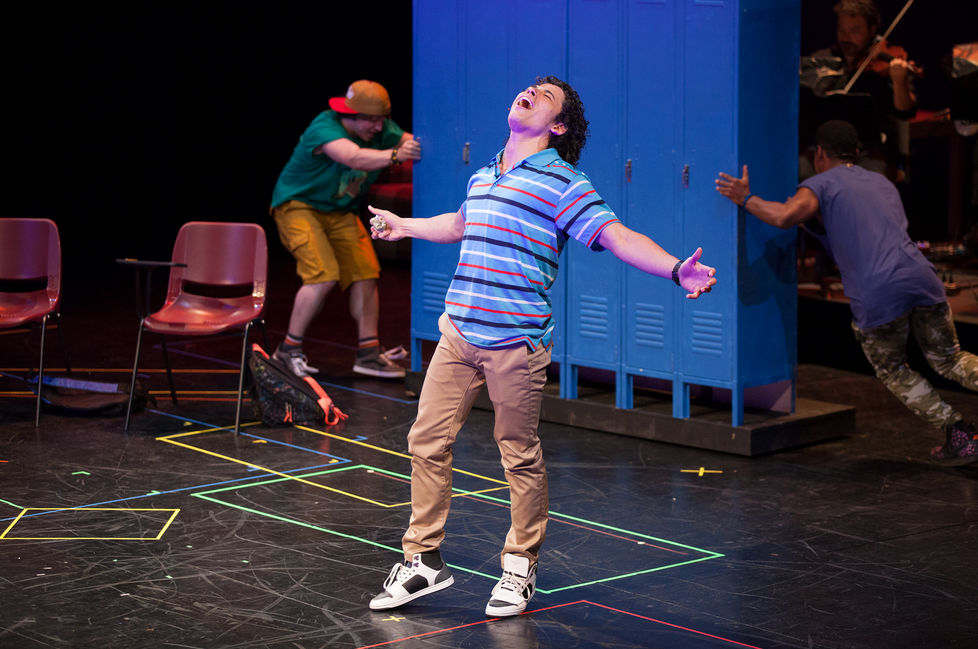 21 Chump Street, filmed at BAM in New York as part of the iconic US This American Life radio series (available as a podcast and often exceptional) is a brief piece, written by Miranda, which like the National’s verbatim musical London Road turns journalism into musical theatre.

Lasting just 15 minutes, it is a goofy, often witty and ultimately heart-breaking little morality tale based on an initiative by the Palm Springs police that in 2011 sent under-cover cops into Florida high schools to pose as students. The aim was to identify and arrest drug dealers and users and arrest them. One such cop, a 25-year-old new recruit poses as Naomi, a young Puerto Rican whose family has just arrived from New York, who attracts the puppy-like devotion of eighteen-year-old Honours student, Justin, with life changing consequences. Unlike many morality tales that peddle a simple message this one comes with a number of shifting complexities.

It also comes with some really terrific songs, including the galvanising Everybody’s Got a Cousin, and the slyly clever duet, Take the Money. The piece is roughly staged in front of a live audience, more like a workshop than a fully staged production, but it doesn’t detract in the least from this neatly performed slice of American pie in which the cherries come with the bitterest of stones.

You can watch the 15min version of 21 Chump Street here. and rent a longer version here.