What do the careers of Stephen Daldry, director of the TV series The Crown, the late great Victoria Wood and Alan Rickman, playwright Mark Ravenhill, Catherine Johnson, who wrote the book for Mamma Mia!, and movie stars Hugh Grant and Ben Kingsley have in common? The answer is that they all began or owe their early success to London’s pub theatres.

Pub theatres have been the backbone of the London fringe or off-West End for more than half a century. That West End hit, The Play That Goes Wrong, began its life at the Old Red Lion in Islington, Erica Whyman—currently acting artistic director at the RSC—once ran the Gate just as Christopher Haydon (now running the Rose Theatre Kingston, where he recently directed Carrie Hope Fletcher in The Caucasian Chalk Circle) and Stephen Daldry both did too.

Numerous writers’ careers from Jonathan Harvey to Dawn King have begun in pub theatres. But the big question is whether, having survived the pandemic, London’s pub theatres from Theatre503 in Battersea to the Jack Studio in Brockley and The Hope in Islington can continue to thrive in the current cost of living crisis.

The warning klaxons are already sounding. At the London Pub Theatre Awards earlier this month, The Stage reported that the artistic directors of London’s pub theatres were anxious about their futures, with Neil McPherson, who runs the Finborough which won the pub theatre of the year award, saying “I’ve been running Off-West End theatres for 26 years and I can tell you it’s the hardest it’s ever been.” 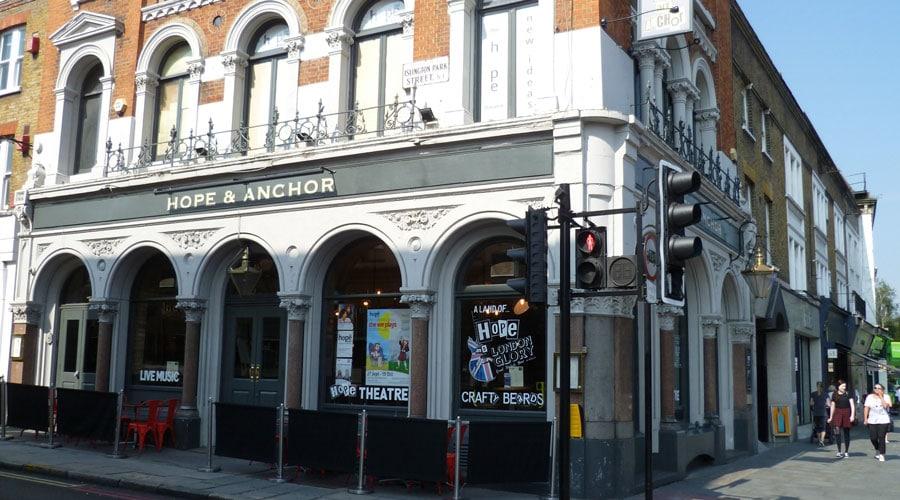 The exterior of the The Hope Theatre in Islington.

Theatre and pubs or inns have a long and intimate history. Back in Shakespeare’s time, plays were often performed in the courtyards of coaching inns. But as theatre moved inside in the early 17th century, theatre gradually took up residence in purpose-built spaces. By the mid-20th century, the grand Victorian and Edwardian theatres were a staple of London’s West End, and from the 1960s onwards new repertory theatres were being built in towns and cities across the county.

But in the late 1960s and early 1970s, a new generation of theatre makers were looking to get their voices heard and productions seen in a theatre culture from which they felt excluded, so they looked to found spaces to show their work. In many cases that was in rooms in pubs.

The Orange Tree in Richmond opened in 1971, the King’s Head was founded by Dan Crawford in 1972 in the back room of an Islington pub, previously used for boxing matches, Pentameters was founded in Hampstead around the same time, the Bush took over the top room of a pub on the corner of Shepherd’s Bush Green in 1972 (top price ticket 90p), and the Gate followed a few years later over the Prince Albert pub in Notting Hill.

The abolition of stage censorship in 1968 (which meant that live productions no longer needed to get a license to legally perform) opened up the possibility of anyone putting on a show and anywhere. Fuelled by an interest in politics and new writing, a new generation of theatre professionals started to colonise the city’s unused spaces. It was good for theatre, and it was good for pub business. Just as they had back in the 16th century, the two complemented each other. But theatre and hospitality are two of sectors hardest hit by the pandemic lockdowns and are also unlikely to be winners in a cost-of-living crisis as people tighten their belts.

The iconic signs outside the Old Red Lion in Islington.

Many of the original pub theatres have endured (although not always in their original venues), and some have gone on to achieve, and in some cases then lose Arts Council funding. That happened to the Orange Tree and sadly last week to the Gate which had no sooner moved from Notting Hill than it lost its ACE funding in a new funding round in which savage cuts. Other London theatres which suffered included the Hampstead Theatre and the Donmar.

It's worrying times for all theatre but for pub theatres especially. Not least because they provide crucial stepping stones for writers, directors, actors and those at the earlier stages of their careers who are unlikely to get a foot in the door of many of London’s bigger and grander venues.

Would we have heard of James Graham—whose Tammy Faye, written with Elton John is currently at the Almeida, and whose Best of Enemies opens at the Noel Coward later this month—if his first four plays hadn’t found a home at the Finborough in the early 2000s? Or Conor McPherson whose earliest plays were seen at the Bush? I don’t think so.

London’s pub theatres have always been a place to spot rising talent and have been the place for audiences (tickets are often extremely reasonably priced) and producers and programmers and directors to see the future. Without these often small, frequently unsubsidised venues, and the dedication of those who run them, London’s theatre and new writing ecology wouldn’t just be poorer, it simply wouldn’t work. Which is why the perilous situation in which many of these pub theatres currently find themselves is a cause for real concern.

Cover image of the exterior of the Finborough Theatre. Photo by Doug Mackie.