Mark Ravenhill: "Staying the same is not an option"

Lyn Gardner chats to the playwright and King's Head co-artistic director about his bold plans for the UK's oldest pub theatre.

The Haunting of Susan A

Mark Ravenhill thinks of himself as an accidental playwright. The author of Shopping and Fucking, Molly Clap’s Molly House, Pool (No Water), The Cane, the RSC stage version of The Boy in the Dress and much more, says that “it’s really chance that my career has been so focussed on writing because Shopping and Fucking which I really wrote as a sort of exercise for myself suddenly took off, and that makes you go where the opportunities present themselves.”

But he points out that “for the 10 years before Shopping and Fucking I was much more focussed on directing, and really I’ve always thought of myself as a theatre-maker. I’ve always been interested in it all. When I was a little kid, and I was making up plays and putting them on I had no idea that there were different roles in the theatre. I have always liked the opportunity to do different things, to see how all aspects of theatre work.”

In the circumstances it’s perhaps not surprising that last year Ravenhill took on the co-artistic directorship (alongside old friend and former Theatre Uncut artistic director, Hannah Price) of London’s oldest and most iconic pub theatre, The King’s Head. The theatre celebrates its 50th anniversary this year.

The idea to apply grew out of Ravenhill’s experiences during the pandemic. On one hand the enforced isolation provided an ideal opportunity to get down to some sustained writing, but on the other, Ravenhill found himself missing the collaborative nature of theatre-making. In response he began doing a lot of mentoring of other playwrights and arranging Saturday night online play readings. As lockdown and restrictions lifted Ravenhill realised “I wanted to be surrounded by people and activity and the day to day nitty gritty of running things. So when the King’s Head job popped up, I spoke to Hannah and we applied together.” He reckons they are a good team. “Hannah is pragmatic, a one task at a time person and cautious, and I’m more sideways thinking and a bit too rash.” 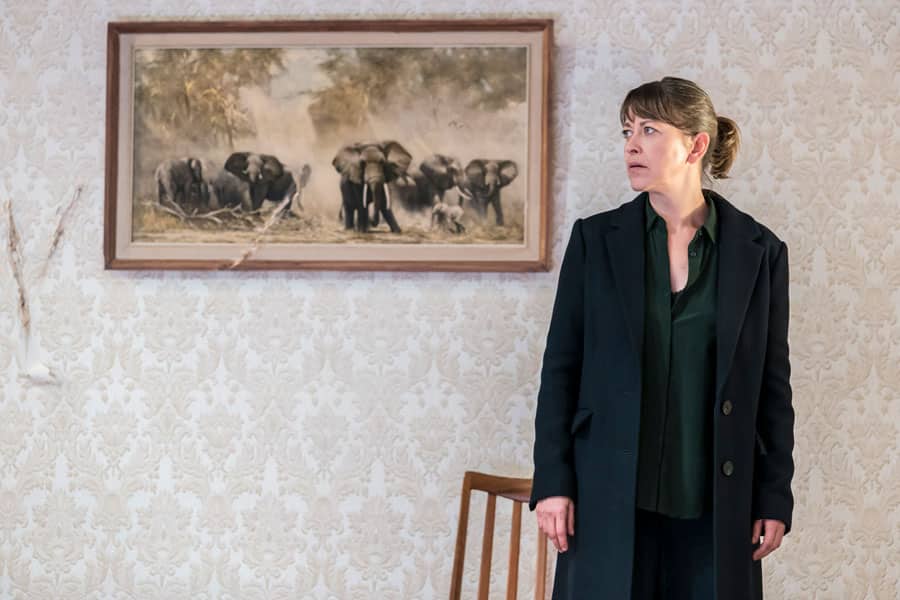 Nicola Walker in the 2018 production of Mark Ravenhill's The Cane at the Royal Court.

Currently undergoing a period of change as the theatre prepares for a move later this year into a new building next door to its current location on Upper Street in Islington, Ravenhill sees the King’s Head’s future as a venue “celebrating all the different narratives and voices that might come under the LGBTQ+ banner and digging into all the colours of the rainbow flag.” He’s aware that to some degree the King’s Head has already been doing that, but argues that “the dominant voice has been that of the gay white male.”

Ravenhill points out that’s true about our main stages too, pointing to relatively recent revivals of Angels in America and The Normal Heart as examples of how gay and queer experience is dominated by white men and “even more dominated by the American vocabulary of coming out, what it means to be gay and an American idea of sexuality. What we are interested in doing is finding the new British voices who are exploring new stories and telling them in a different way.” He thinks that the new theatre, which will have 222 seats, could offer writers a bridge between working on the fringe or in festivals such as the Vault and bigger stages.

“There is a lot of emphasis from the Arts Council of giving small grants that gets lots and lots of writers started. But there are far fewer opportunities for people to build and sustain careers in theatre. People need to be able to make a living and I hope at the King’s Head we can help them do that.”

Part of the appeal of the King’s Head for Ravenhill comes not just from its future potential but also from its ragbag past. While he’s clear that the new building and the significant increase in seating capacity means that “staying the same is not an option,” he recognises that part of the King’s Head appeal and strength has been its “tatty glamour” and the way right from the start, under its founder Dan Crawford, “it had one foot in showbiz. The fact it is not subsidised pushed it in that direction, but I think it’s quite healthy that it’s not purist about new writing in the way the Bush or the Royal Court are. It means it is quite promiscuous in its forms. It can host cabaret, comedy, musicals and urgent new plays. It’s always been a sort of variety house.” 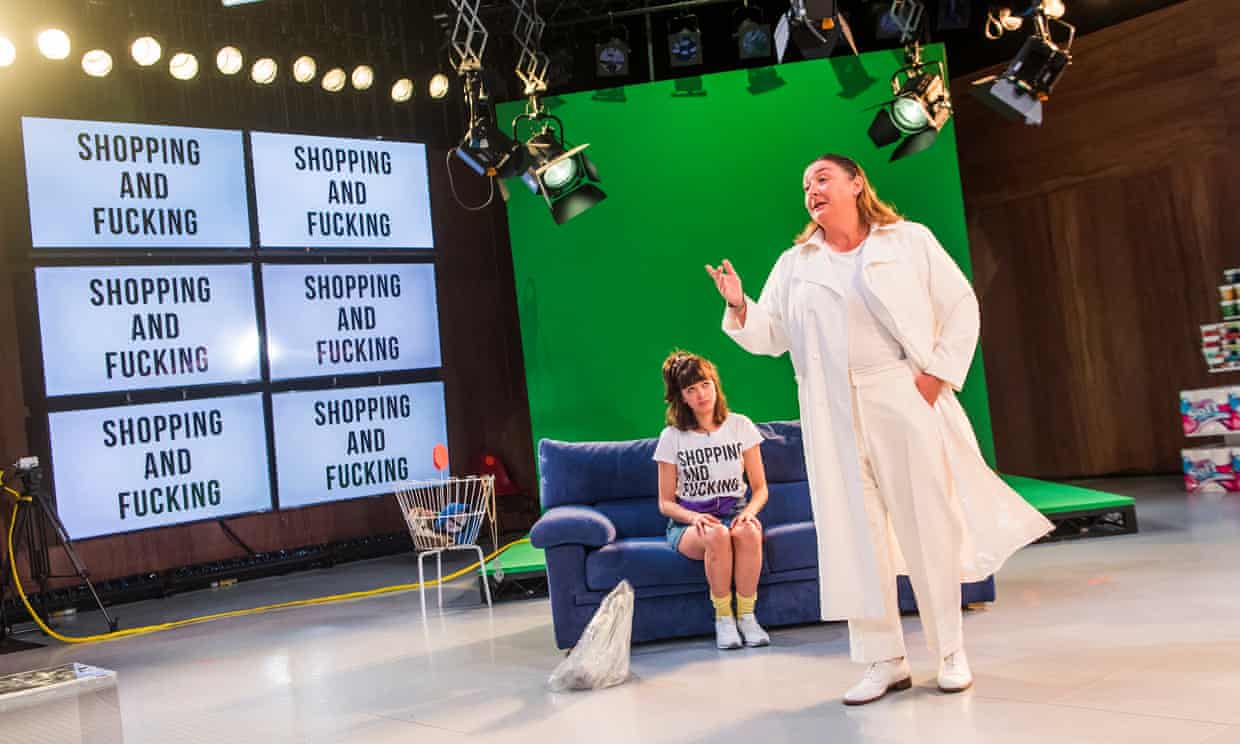 Sophie Wu and Ashley McGuire in the Lyric's 2016 revival of Shopping and Fucking. Photograph by Tristram Kenton.

A one-man variety house, promiscuous in his forms, is also a pretty good description of Ravenhill and his oeuvre over the years. Few playwrights have dabbled in both opera librettos and pantomime, as well in new writing and musicals, thrillers and experimental theatre.

“The success of Shopping and Fucking when I was 30 has never been a burden but I think that play still defines lots of people’s idea of what I write and who I am. But it’s not. The world has changed and so have I. When I wrote Shopping and Fucking I thought I had a year to live, and I’m still here. My instinct as a writer has always been to keep moving, and to do different things and that seems to have worked because I’ve managed to make a living for the last 26 years. That’s quite rare in theatre. For lots of playwrights writing plays is more like an athlete’s career, maybe you have 10 good years. It’s one of the reasons why I was up for doing the King’s Head job. How can we turn playwrighting into something you can do over a lifetime?”

Ravenhill’s latest play, The Haunting of Susan A, in which he also appears, is another playful poke at genre and is a site responsive piece inspired by the stories of M.R.James and the King’s Head theatre itself.

“I was sitting in the theatre thinking about memories, and all the good and bad things that happen in a space and how they linger. I’ve been interested in ghost stories for a few years and the idea of ghosts as trapped memory, and I was thinking about the King’s Head and thinking that if there was a ghost in this space why would it be trapped. I think that if you write plays, you will eventually write ghosts because ghosts are so central to theatre in every way. Every night you are asking the audience to project and summon things up with their imaginations.”

Cover image from The Haunting of Susan A which runs at the King's Head Theatre from the 1st-26th June 2022. Tickets can be found here.