Lyn's Lowdown on The Woman in Black

The Woman in Black at the Fortune. Hasn’t that been on for an eternity?

Well eternity is pushing it a bit. I’m always with Tom Stoppard on that one when he wrote “eternity’s a terrible thought. I mean, where’s it all going to end.” But Stoppard and pandemic aside, The Woman in Black has been in the West End since 1989. It’s the West End’s second-longest runner after The Mousetrap. It is not to be confused with the Woman in White, the short-lived Andrew Lloyd Webber musical based on the 1860 Wilkie Collins novel or The Man in Grey who is said to haunt the Theatre Royal, Drury Lane.

So, if it’s been playing so long it must be a bit creaky?

You may be surprised. It has a meta-theatre framing device. There is a good reason why it has been a staple on GCSE syllabuses over the years.

Talking of ghosts, does the Fortune have one?

What self-respecting London theatre doesn’t? Back in 2015 it was reported that the cast and crew had experienced seeing a strange figure both on and off stage. But for theatre ghosts you can’t beat the one at the Lyceum where the Lion King is playing which apparently takes the form of an elderly women cradling a severed head. I’d say slightly more distracting than having your neighbour eat an entire family size pack of Maltesers during Circle of Life. 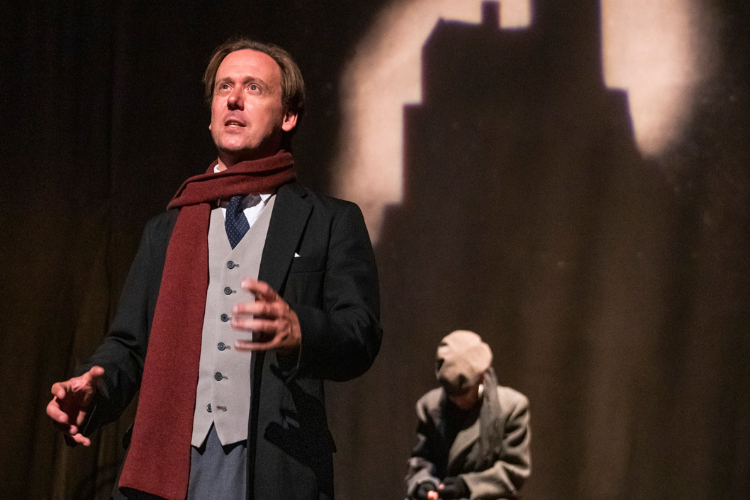 Recent production photo from The Woman in Black at the Fortune Theatre.

Anyone famous in it?

Not at the moment, but who knows where the current cast may eventually land. Joseph Fiennes and Martin Freeman both appeared in the show early on their careers.

I’ve seen the 2012 movie version with Daniel Ratcliffe and read the novel, so why bother?

It’s not the same beast at all. There is a reason why the show has run for such a long time and with such success. The show sits really well in the small and intimate auditorium which is used to maximum effect to create tension and the fear factor.

Ok, but I just don’t fancy seeing it with loads of teenagers?

You might be surprised. Their enjoyment and willingness to be spooked is likely to be your enjoyment too. It’s like when you go on a roller coaster and everybody else’s screams add to your experience.

Do you have any good advice?

Stay with it even if you don’t think it’s for you and definitely don’t leave at the interval. You will regret it.

Don’t say: I’m so over ghosts since seeing Hamlet.

Do say: Some things have got to be believed to be seen.

Cover image from The Woman in Black at the Fortune Theatre. Tickets can be found here.