Lyn Gardner fills you in on a thrilling actor who's playing King Lear this summer.

Name rings a bell, why should I know her?

Simply because she is one of the most thrilling actors of the last 40 years. Born Aikaterini Hadjipateras to Greek parents in New York, but raised in the UK, Hunter is much loved and admired within theatre itself but deserves much wider acclaim. You might have caught her in The Chairs at the Almeida earlier this year when she performed with her husband and long-time collaborator, Marcello Magni, and made the endearment “crumpet” utterly unforgettable. She’s just about to play King Lear at the Globe.

Isn’t she in Joel Coen’s Macbeth?

She is, alongside Denzel Washington and Frances McDormand as the Macbeths. They are both very good, but Hunter is absolutely scene stealing playing not just one, but all three witches. Of director, Coen, she said, “if he had asked me to play a bag of chips I would have said yes.”

Let’s hear it from Hunter herself: “Nobody has ever done Lear.” Or indeed is done with it. But you are right, Hunter did indeed play Lear 25 years ago at the Leicester Haymarket and the Young Vic when she was just 37, and once again the Polish-born director Helena Kaut-Howson will be directing. Hunter has also played Richard III and Timon of Athens. She once said, “I gravitated towards male roles because men tend to be given more interesting things to do.”

So what makes Hunter so interesting?

She’s such a shape-shifter. In fact, she’s even played one, taking the title role in Caryl Churchill’s The Skriker at the National Theatre in 1994. That was three years after she won an Olivier for her performance at the same address playing Clara, the vengeful billionaire in Complicite’s production of Durrenmatt’s The Visit, who returns to the town of her birth which has fallen on hard times. The diminutive Hunter (she’s only five feet tall) towered above the rest of the cast on stilts like a malevolent stick insect. 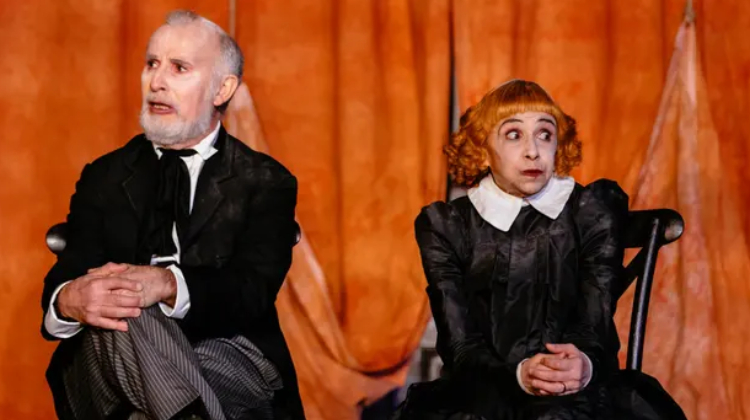 Kathryn Hunter and Marcello Magni in The Chairs at the Almeida. Photo by Helen Murray.

Why isn’t she better known?

Probably because she has largely done theatre rather than movies and TV which raise profile. And because she always makes interesting and unexpected choices in the theatre. She has never gone for the mainstream or the obvious. She’s directed, she’s devised, she’s even played a monkey in Kafka’s Monkey at the Young Vic. Very convincingly. She is always distinctive, never ordinary and she combines a fascinating physicality with an agile intellectualism and a voice like gravel dripped in honey. Or as one critic put it, “the throaty purr of a bronchial lioness.”

So why should I see her as King Lear?

Because if first time round it was very good, second time round it is likely to be magnificent. Because Michelle Terry is playing Cordelia and Lear’s Fool opposite her and that’s a pairing that any keen theatre-goer will find very tasty. Because I can say really confidently that this Lear will be unlike any other.

Why not Queen Lear?

Did you know that Julie Taymor said she wouldn’t do A Midsummer Night’s Dream in New York unless Hunter would be her Puck? Hunter obliged.

Cover image of Kathryn Hunter as King Lear which runs through the 24th July at Shakespeare's Globe. Tickets found here.