Lyn's Lowdown on Come From Away

What is Come From Away and why is it in the news?

It’s the sleeper hit musical set in the wake of 9/11, when 38 passenger planes were forced to land in a small town in Newfoundland called Gander as a result of all air space being closed. The locals took in 7,000 people and showed them kindness and hospitality. The show has been extended for the final time to January 2023 when it will close.

You are right it doesn’t. Niceness just isn’t often a dramatic driver. A nice Richard III or a pleasant Hedda Gabler just wouldn’t make for a great night out. But Come From Away is an exception as well as an exceptional musical. David Hein, who co-wrote the musical with his wife Irene Sankoff, observed that the original omens were not promising and there were few signs it would be a hit. “Our producers talk about how when they first picked up the show it was title that no one could remember, it was an ensemble show so it wasn’t about one movie star being in the cast, and it was a story about 9/11 the musical. So no one expected us to get to Broadway.”

It did and it has travelled around the world picking up awards—including Tonys and Olivier’s-- along the way. It has grossed over $175 million on Broadway alone. But probably the most important production was the 2016 concert version that was produced as a gift for the people of Gander.

So what’s the secret?

A great folksy score, big properly drawn characters and tons of heart. You might say it is theatre’s first great play about living through 9/11, and the fact that it comes at it from an oblique angle makes it all the more impressive. The Covid pandemic has given the show a further fillip speaking to what it means to be apart, the kindness of strangers and how community really can and does exist. 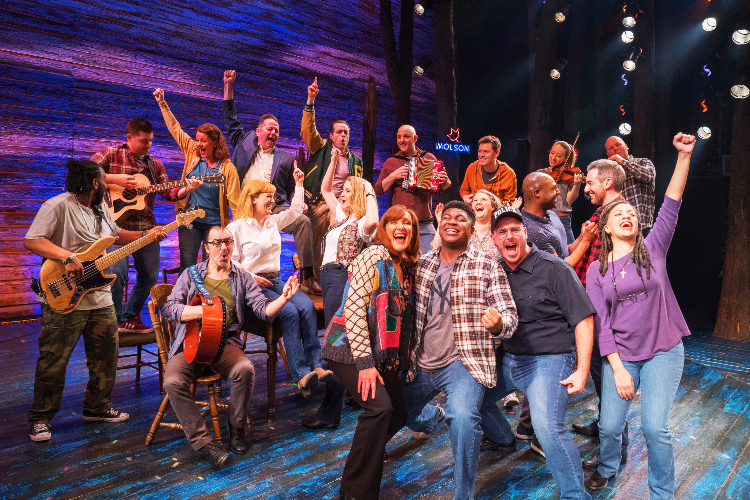 The cast of Come From Away, photo by Craig Sugden.

What else have Sankoff and Hein written?

My Mother’s Lesbian Jewish Wiccan Wedding. Like Come From Away it is based on a true story, in this case Hein’s own mother.

Is there anything to be learned from its success?

Yes, Sankoff and Hein’s early interviews with the residents of Gander, undertaken 10 years after 9/11, were funded by the Canadian Arts Council. Early stage investment is crucial in the development of great shows. This wouldn’t have happened without it. The other thing it proves is that there is no such thing as an overnight success. It took 10 years from idea to Broadway.

What did the critics say?

Let’s not bother with the critics (mostly favourable, despite their frost-bitten hearts) and instead hear it from former Canadian PM Justin Trudeau: “Oh my God, after the first two minutes I just cried the whole way through.”

It’s the biggest thing to come out of Canada since maple syrup.

Cover image of the cast from Come From Away, photo by Craig Sugden. This show is running at the Phoenix Theatre and will close on the 7th January 2023, tickets available here.