Losing the path, finding yourself

In Sondheim’s Into the Woods, Red Riding Hood tells the Baker that her mother has warned her never to stray from the path. To which he quite rightly points out that it’s already too late because “the path has strayed from you.”

The Believers Are But Brothers

The path strays too in this staging of Philip Pullman’s Grimm Tales, created at the Unicorn by Kirsty Housley. You may not know the name, but Housley has collaborated on some of the most interesting shows of recent years including Complicte’s The Encounter, Javaad Alipoor’s The Believers are But Brothers, Arinze Kene’s Misty, and most recently Bryony Kimmings’ I’m a Phoenix, Bitch. The latter will be making a welcome return to Battersea Arts Centre next year and you should book your tickets now.

Housley’s work is characterised by the way it operates between forms, blurring the lines, and if this show – created for children and family audiences – is not as radical as some of her other work, it offers some surprises. All is not quite what it seems in the safe brightly painted nursery. It’s the night before Christmas and over-excited children and weary, wine-quaffing parents come into conflict when the under-the-tree gingerbread house is prematurely opened and nibbled by the children like latter-day Hansel and Gretels. 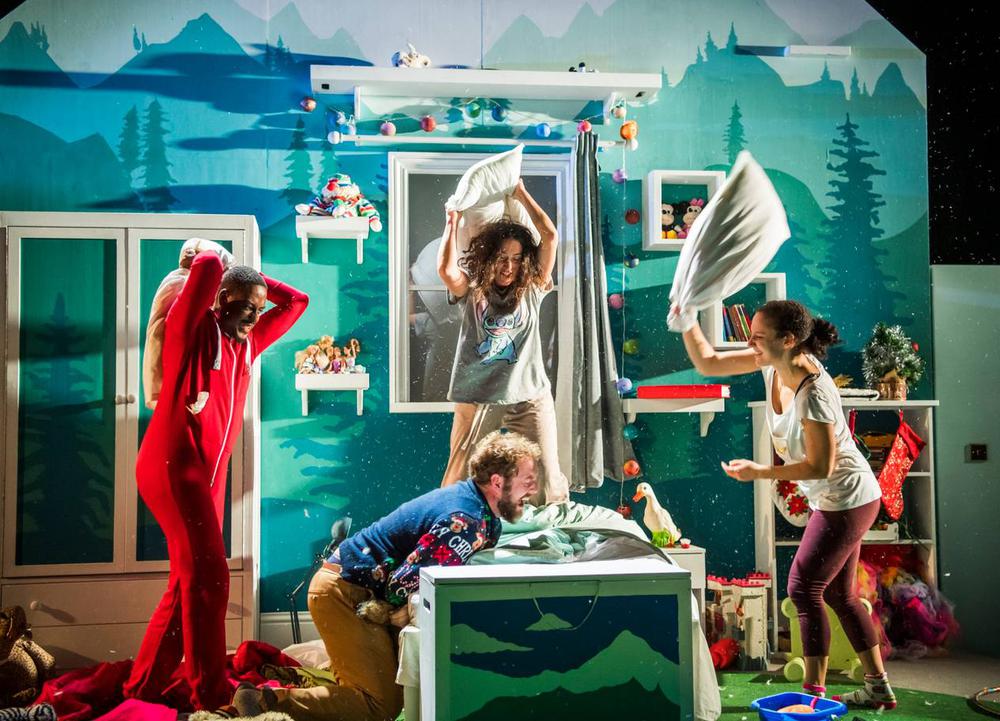 Hansel and Gretel is one of the stories told here in Philip Wilson’s smart adaptation. It is done with a grisly glee which makes the audience scream with deliciously shocked laughter. As does the tale of The Juniper Tree which is staged as a deranged folk horror story in which a father eats his own son. Cinderella gets a makeover, liberated from Disney saccharine and becoming the story of a teenager escaping her father’s incestuous desires.

Not everything comes off and initially the adults playing the children are a tad over-boisterous, with the enchantment and danger kept at bay. But stay with it, because there is an extraordinary visual moment (designer Ellan Parry) which blasts the show wide open and which takes it much deeper into the icy thickets of both storytelling and the mind. This is a show that reminds that the line between the conscious and the unconscious is a very fine one, and sometimes adults inflict casual cruelties upon children, barely noticing the consequences of their actions. It’s not just witches who want to gobble up children who do damage. 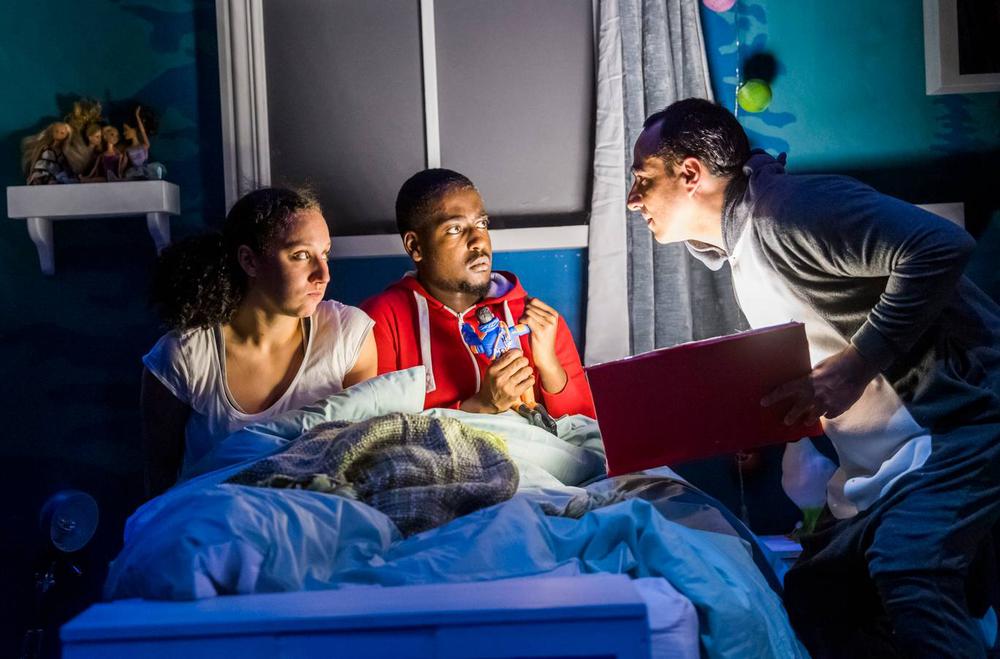 Here, parents scoff cheese on sticks as the story of Hans the Hedgehog is acted out as if they are eating the poor enchanted boy, and dad is so busy sweeping he doesn’t notice that he is tidying away Hansel’s carefully laid trail of crumbs. In the end, children have to save themselves. Hansel and Gretel escape the witch through their own resourcefulness; Red Riding Hood strides boldly alone through the forest and off the path. Parents are left behind. The children find their own way, using these old familiar stories to light their way through the woods.

None of us are ever too old for fairy tales.

At the Union, Striking 12 is a contemporary musical retelling of Hans Christian Andersen’s The Little Match Girl aimed at an adult audience. Given that London has already seen Emma Rice’s seductive The Little Match Girl and Other Happier Tales at the Sam Wanamaker at the Globe, and paid court to the outrageously enjoyable Meow Meow with her own take on the story, this has quite a lot to live up to.

Written over a decade ago, it relocates the story to New York and New Year’s Eve where Brendan (Declan Bennett) a depressed office worker, whose fiancée has recently called off their wedding, is resolutely eschewing the festivities. He even dismisses a young woman (Bronte Barbe, very good) who turns up at his door flogging lights for seasonal affective disorder. 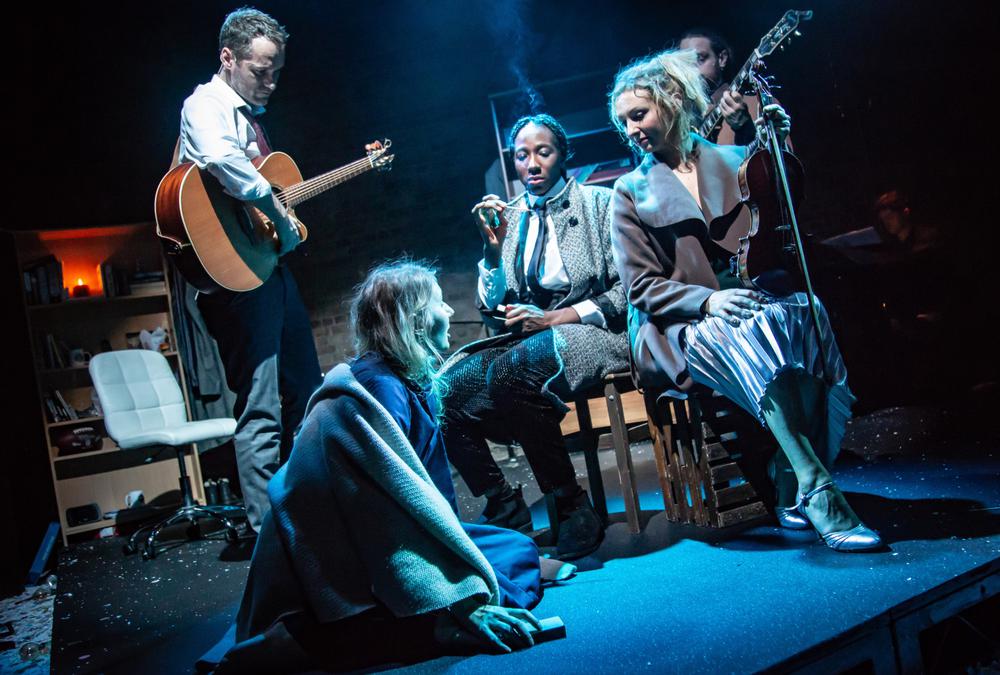 On the night I saw it the sound balance made it hard to hear Rachel Sheinkin’s lyrics, a shame because they are often witty. It also seems odd to tell this particular story without any mention of poverty, and the gap between rich and poor. But the score has some lovely moments, and it’s a pleasant if slight 70 minutes in Oliver Kaderbhai’s pared back staging. But what it really does well is capture the way that depression isolates you from the world. Like the child in Andersen’s original story, Brenden observes the world at celebration as if from behind a pane of glass. Both are excluded and isolated as the world dances on oblivious to their pain.