If you were to ask me about the great theatre companies of the last 30 years, I’d say that one of the very greatest has been Oily Cart.

Never heard of them? That’s because they primarily work with the under-fives, children with profound and multiple learning disabilities and those on the autism spectrum. It’s no surprise that if we don’t value children, then we are unlikely to value those companies who make theatre for children.

But it was because they work with the very young that Oily Cart were ahead of their time, pioneering a form of immersive and sensory theatre long before other companies such as Punchdrunk came along providing such theatrical experiences for adult audiences. Yet still Oily Cart’s work goes relatively unsung, even though many contemporary theatre makers could learn a great deal from them.

Founders Tim Webb, Max Reinhardt and Claire de Loon all recently retired, and they will be missed, but the company continues and this Christmas it is at Arts Depot with Hippity Hop, in a new production of the hip opera for two to five-year-olds which was first seen over a decade ago. 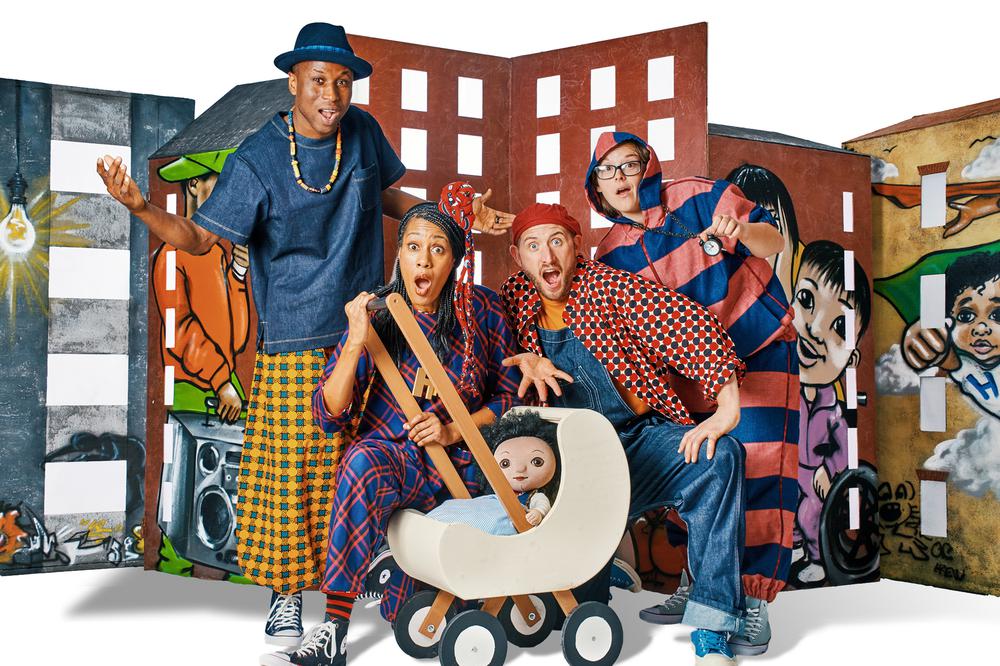 The company of Hippity Hop. Photo by Suzi Corker.

It still looks radical in the way it uses sound, touch and smell to encourage with very young audiences, and it is clever in the way that it regularly gets the audience on their feet before restlessness sets in. Nonetheless this story of a baby whose buggy rolls away (shades of Battleship Potemkin), and who the children must reunite with her missing mother, is a wee bit lacking in narrative impetus and emotional underpinning. Finding mum is an oddly leisurely affair lacking a sense of urgency.

But there is fun to be had along the way in a show which is always tuneful and visually arresting in its depiction of a graffiti-clad city—and which is performed by a generous cast who eschew star turns for making this a fully participative experience for its young audience. After the Arts Depot dates the show heads out of town but you can catch it back in London in February when it plays both Stratford Circus and the South Bank Centre.

Gentler still for the same age group is Filskit Theatre’s wordless but none the less expressive penguin-themed Huddle at the Unicorn. There is plenty of droll charm here, notably from Joseph Barnes-Phillips’s father penguin who is delivered an egg in a crate and has to develop some parenting skills sharpish when he drops it, and he’s left holding the baby penguin (Victoria Dyson). His squawks become more discombobulated, and then calmer as love sets in. 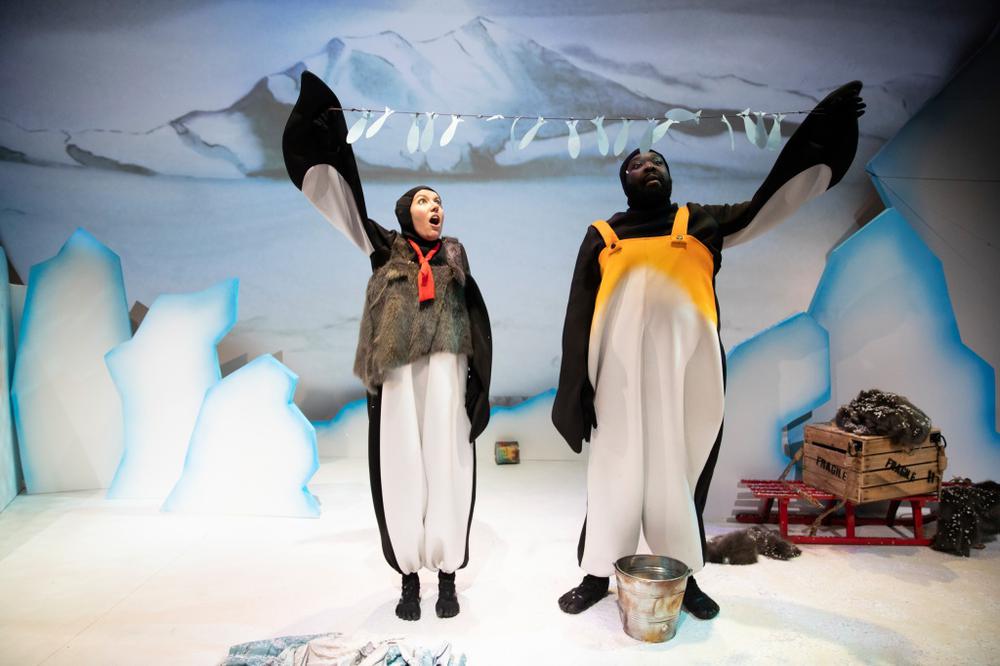 It may be snowing, but the relationship between these two birds, isolated from the rest of colony (seen only on projections, much to the disappointment of my accompanying three-year-old who felt a little short-changed by just two penguins), is definitely full of heart, particularly when they feed each other from a washing line of fish. Like Hippity Hop—but without the interactive bonus—this is rather big on backstory and short on storytelling until the final jeopardy. If it was shorter, tighter and some of the clowning more precise, this would be a real winner. Because who doesn’t love a baby penguin? As it is, it’s a low-key winter warmer.

For older children, Return to Elm House at Battersea Arts Centre begins as a lesson, one that to be truthful is a wee bit dull, but turns into a rollicking adventure. Like Hippity Hop this is theatre where children don’t just watch, they do. It is a history lesson brought vividly to life and one which makes you feel as if you can reach out and touch the past.

Battersea Town Hall, which now houses Battersea Arts Centre, was built on the site of Elm House, for a long time the home of Jeanie Nassau Senior who is suspected of being the inspiration for Dorothea in George Elliott’s Middlemarch, was definitely the first person to sing at the Albert Hall and, as the first female senior civil servant, invented foster care.

Through the sudden appearance of a mysterious door in the council debating chamber, and one of those wrinkles in time so beloved of children’s stories, we can make contact with Jeanie but only if we follow the vibrating stick and find the hidden treasure boxes hidden in the piles of leaves that have invaded the nooks of the building as if nature is trying to take over. 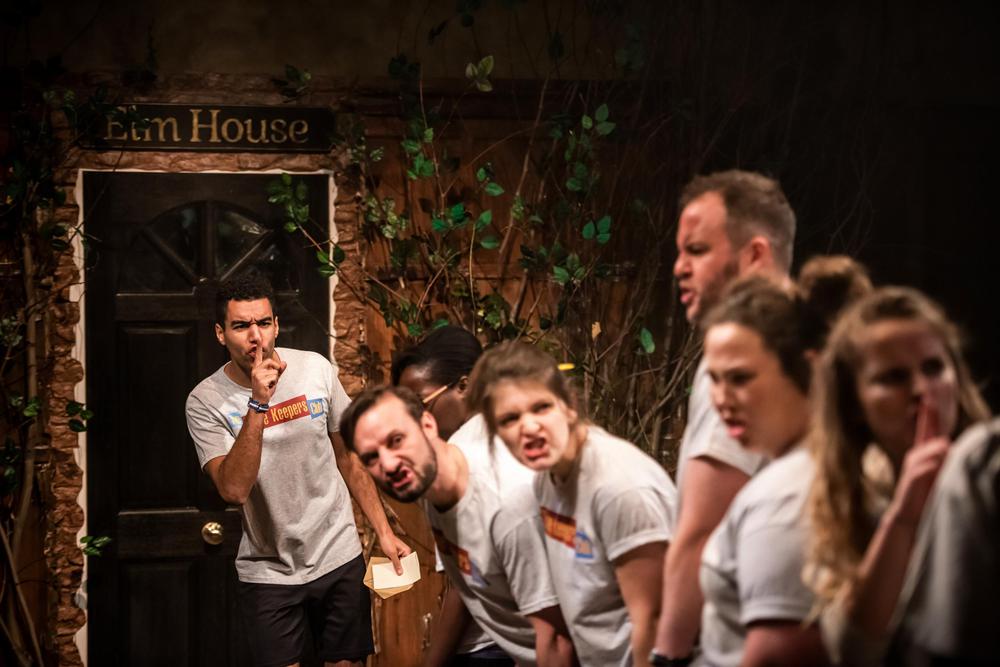 The pleasure here is mostly in the enthusiasm and excitement of the children as they uncover the past, finding out about the Victorian poor houses, social and gender inequalities and the way change can be implemented. But the show’s other great strength is the way that via the trail around the building, which features installations along the way, it genuinely makes us feel as if we are not just walking in the footsteps of those who have gone before us like Jeanie, but that like her we have the power in our own hands to make change happen.

All we need is courage and hope, and in the version I saw (there are a number of different installations and you don’t get to see them all) a warm beating golden heart and some glittering dandelion clocks provided moments that link Jeanie to us and us to our own futures.  As the Battersea Arts Centre’s 19th century motto reminds us:

Hippity Hop plays at the Arts Depot until 31 Dec, Stratford Circus from 8-9 Feb, and the Southbank Centre from 13-17 Feb. Huddle plays at the Unicorn Theatre until 6 Jan. Return to Elm House plays at Battersea Arts Centre until 30 Dec

Tip: IOS users can peruse family theatre on the app by filtering on the What’s On page (coming soon to Android!)