Interview: Eleanor Tindall, writer of Before I Was a Bear

Lyn Gardner chats to the writer of a smart 21st century reframing of a Greek myth.

In Ovid’s Metamorphoses, Callisto is a nymph who attracts the attention of Jupiter (Zeus, in Greek mythology) who is determined to sleep with her. When Jupiter’s wife, Juno, finds out that her husband has been unfaithful she turns Callisto into a bear. Eleanor Tindall’s delicious Before I Was a Bear, which opens at Soho Theatre this week after a successful pre-pandemic run at the Bunker, takes ancient myth and reframes it as a contemporary one woman play about power, shame, celebrity crushes and the enduring nature of female friendship. Even when the going gets tough and very, very hairy.

“The play started back in 2017,” recalls Tindall, “when I was talking with the director, Aneesha Srinivasan, about teenage crushes and how intense they were, and how you carry that intensity into adulthood. I wondered what would happen if you met your crush in real life. I thought the complexity of the power dynamic was an interesting one. The other thing at the back of my mind was what happens when normal people have relationships with celebrities and how they are viewed and judged, often harshly, but the celebrity isn’t.”

Nominated for a Stage Debut Award, Before I Was a Bear is a brilliantly funny-sad play which captures the intensity of being a teenage girl as your hormones run riot. It cleverly explores what happens when the unattainable becomes within grasp, and examines how a young woman might be treated if she embarked on an affair with the married TV star being touted as the next James Bond who she’s fancied since she was 14. In the process, like Callisto in the original story, Cally gets separated from her gang. 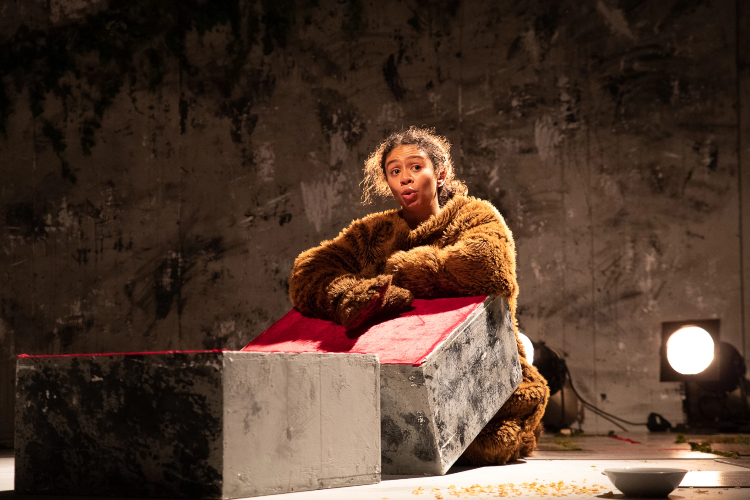 Jacoba Williams in the 2019 production of Before I Was a Bear at the Bunker. Photo by Tara Rooney.

Tindall, who has been part of Soho’s Theatre Writers’ Lab, studied classics so perhaps it’s not surprising that she has often drawn on mythology in her work. “They are some of the oldest stories, and we all think we know them, but you can take them and tear them apart and put them back together again in ways that feel very modern. In this case I was thinking about writing the play when I was looking through Ovid’s Metamorphoses. It made me think about Zeus and all the terrible things he did to mortal women, and his abuse of power, and the Callisto story seemed like such a good fit. These women in these stories so often get treated terribly. I want to know what their story was, and what would their story look like now.”

In Before I Was a Bear Callisto becomes Cally who as the title suggests gets changed into a bear. At least when I saw it, I totally believed that Cally was a bear, but Tindall says that while you can take the story quite literally as I did, Cally’s transformation into a bear might be read as a metaphor for shame, and the feelings Cally experiences when her illicit relationship becomes splashed all over the tabloids.

“I really like the fact that everyone can see the bear in a different way. I loved the challenge of how you have a woman as a bear on stage but I also loved the ambiguity of it too. Everyone has their own version of the play, their own ideas about whether Cally has really turned into a bear and what it means.”

There are many different kinds of power in the play, from the power of the famous man, the power of his wife trying to take back control, to the power of teenage girls and how they feel invincible, to the bonds of female friendship which sometimes fray but which often reassert themselves in times of trouble. Central, is not Cally’s relationship with the handsome TV actor, Jonathan, but her complex relationship with Carla, her best friend. 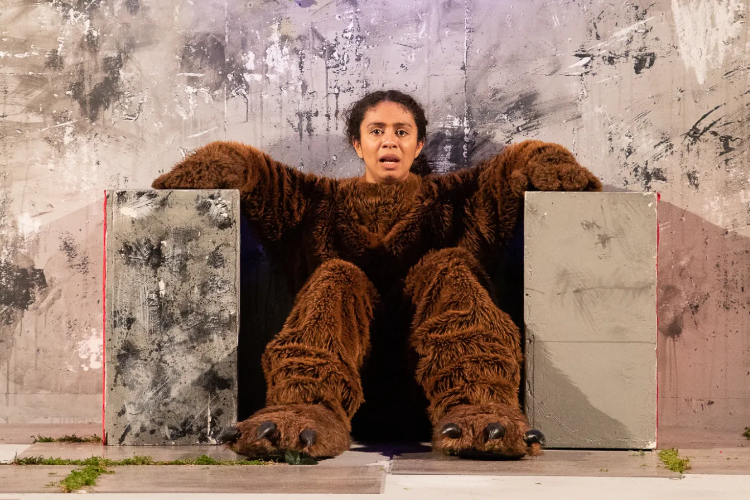 Jacoba Williams in the 2019 production of Before I Was a Bear at the Bunker. Photo by Tara Rooney.

“I’ve always been interested in how different people see the power in different situations, how people define power, what if you are powerless but find power and what happens if you lose power. Cally’s always trying to grab power and it keeps escaping her.

Cally thinks she has power in the affair with Jonathan because she thinks she’s in control, but then others don’t see it that way and she loses power, and it takes her a while to see that.”

Before I Was Bear gained Tindall plenty of attention during its initial Bunker run, but the enforced hiatus of the pandemic means that, as for many emerging playwrights, the momentum that her debut play brought has been difficult to maintain.

“As an emerging playwright it feels as if you have a hill to climb. I had started that climb and then the pandemic hit so it feels as if I took a few steps back. So many theatres have such a backlog of plays and that can feel like just another obstacle. But I feel very fortunate that Before I Was a Bear is getting another chance to be seen. Lots of people at my career stage haven’t been anywhere so lucky.” But not all have written a play which roars with such pain, truth and laughter.

Cover image from Before I Was a Bear at Soho Theatre from 6th through 11th June 2022. Tickets can be found here.