Interview: A Day in the Death of Joe Egg

A Day in the Death of Joe Egg

When Peter Nichols’ first play, A Day in the Death of Joe Egg, was performed over 50 years ago it broke a taboo in showing a couple coping with the pressures of dealing with a severely disabled child. Also for its uncompromising representation of that child on stage. Five decades on, Toby Stephens, and Claire Skinner prepare to play the beleaguered parents—Bri and Shelia—alongside Storme Toolis, the first disabled actor to play the role of the daughter with cerebral palsy on a British stage. Director Simon Evans reckons that contemporary audiences are still in for a taboo-busting evening at Trafalgar Studios.

“People still find it hard to be confronted by the realities of living with a child with disabilities. They find it difficult,” says Evans whose recent productions include The Dazzle with Andrew Scott, and Bug with Kate Fleetwood and James Norton. “During previews I’ve noticed that the audience is really laughing hard and then the child is brought on stage and you can feel the audience shift and feel a bit uncomfortable as they start to question their own response.” 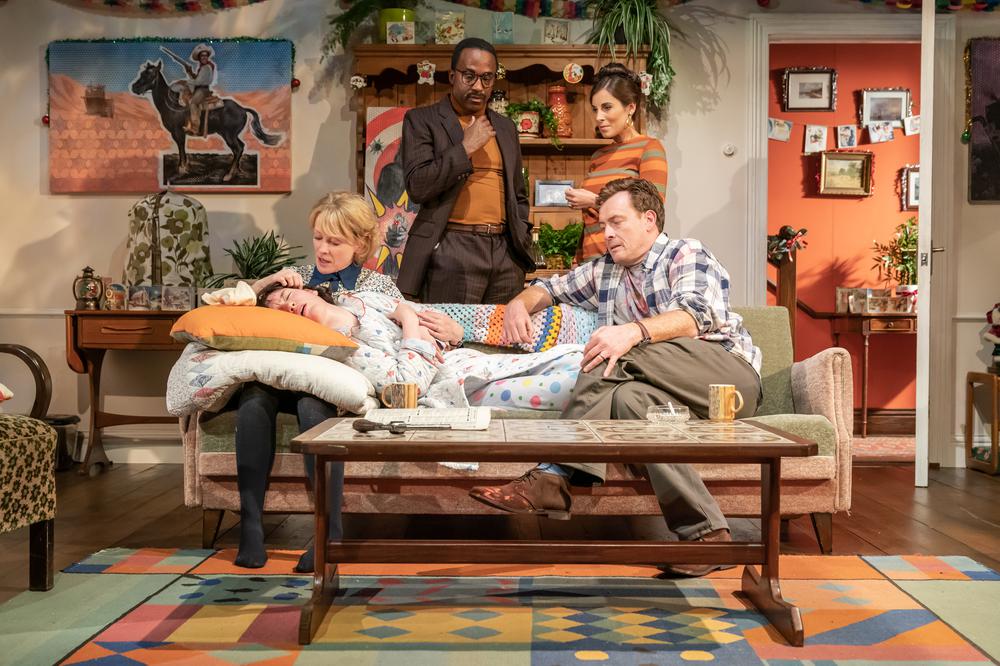 If that makes A Day in the Death of Joe Egg sound grim, the kind of night in the theatre you might go out of your way to avoid, then think again. And think hard. The brilliance of this deeply humane, deeply moving, riotously funny play is the way that it combines dark, often shocking comedy with raw pain; direct address with a gradual unpeeling of Bri and Shelia’s states of mind as the tinkle of breaking taboos can be heard all over the theatre. The trick, suggests Evans, is to “avoid sentiment, and keep our powder dry. Just before he died, Peter [Nichols] said to me that he wanted the audience to do all the crying. Otherwise it just becomes maudlin and soppy.”

Nichols, who died earlier this month aged 92, may have been accused by some of crossing the boundaries of good taste in putting the plight of Bri, Shelia and their daughter on stage. But he had every right to do so because he and his wife, Thelma, knew the day to day pressures on family life of dealing with a severely disabled child. That was in an era when Scope was still called The Spastic Society and a doctor might refer to a parents’ child as a “vegetable.” The Nichols’ brain damaged daughter, Abigail, died age 11.

It is hard not to see A Day in the Death of Joe Egg as a play into which Nichols poured all his pain and rage in a desperate attempt to see the funny side of a desperate situation. One in which family and friends keep offering their own advice. “If I say gas chambers that makes it sound horrid,” says the ghastly Pam, Shelia’s do-gooding friend, who is of the opinion that the best thing for Joe Egg would be euthanasia, in one of the play’s many gasp-inducing moments. 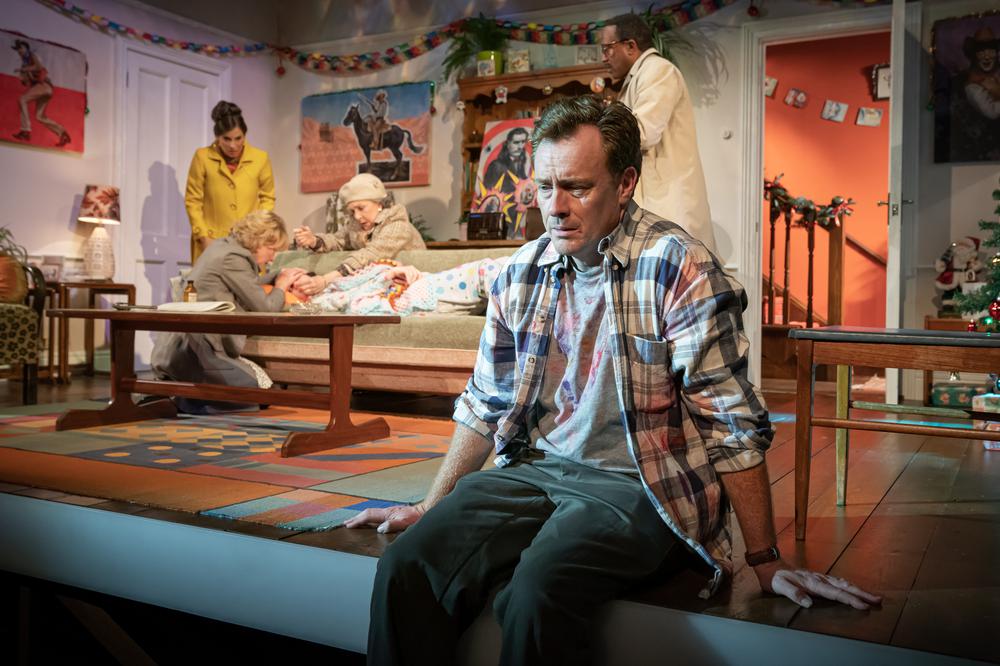 “Peter still had an anger in him about the treatment he and Thelma experienced with Abigail," says Evans. “The play keeps challenging the audience to say that this isn’t the best way for Bri and Shelia to live their life. The friends are based on real people Peter knew, although he may have dialled them up a bit. But they represent everyone who, when they see how Bri and Shelia are living, go: ‘I understand you and what you are living through. I know I have only spent five minutes with you, but I have got an idea that will help.’ But Bri and Shelia have been living this complex, difficult situation 24 hours a day for 15 years."

Both Stephens, most recently seen in the West End in Oslo, and Skinner (last on stage in Nightfall at the Bridge last year) spent time with the parents of disabled children to prepare for their roles.

“Those parents have faced a lot of the same issues that the characters face in the play,” says Stephens. “They were so proud of their kids, but they never claim it is easy to bring up a disabled child. A lot of stuff came up about the impersonal nature of the medical profession, the attitudes of friends and family members to their lives as parents of severely disabled children and the impact on their mental health and relationship. We may think of A Day in the Death of Joe Egg as a period piece, and we are more enlightened, but this stuff still happens today.”

Skinner, who is best known for playing the harassed wife and mother, Sue Brockman, in the long-running hit TV series Outnumbered, says that while she has no personal experience of disability, as a parent she knows how, like Shelia, it is easy to blame yourself when something goes awry with a child you are raising.

“When something goes wrong with a child you ask yourself: is it my fault, did I do something that made the child the way they are? Every mother does and Shelia keeps worrying away at it.” 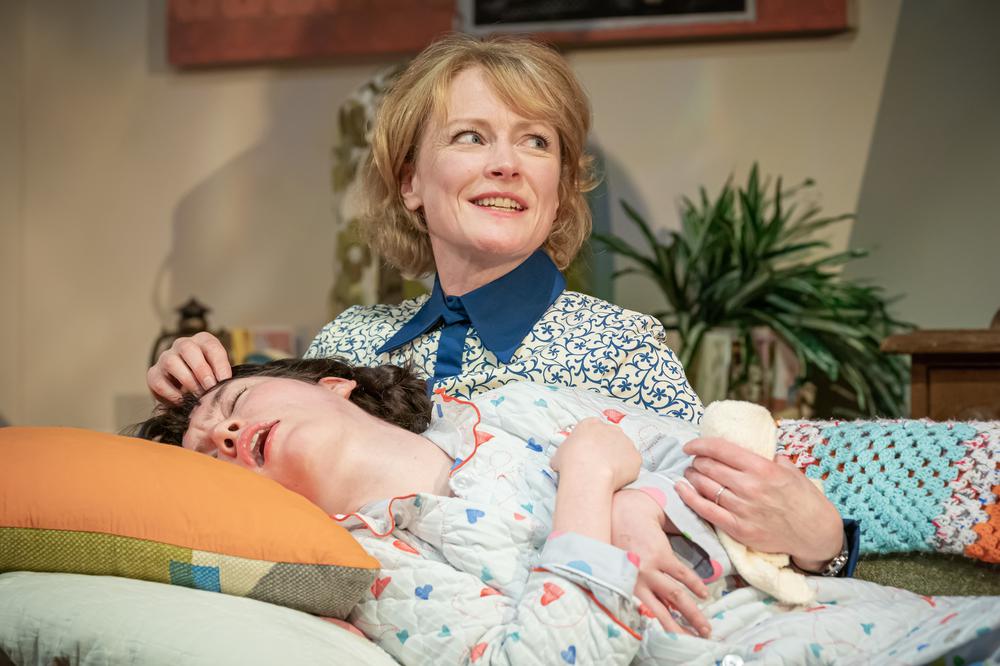 Both she and Stephens relish the technical challenges of a play that demands that the actors address the audience directly and pose them questions, but also agree that in the end A Day in the Death of Joe Egg is about the tragedy of a marriage that is crumbling under the pressure of parenting a child with complex needs.

“Marriage is difficult under any circumstances,” says Skinner, “but for Sheila and Bri looking after Joe magnifies all those tensions. They are under very visible strain, but what I really love is that throughout you see the connections that brought them together in the first place. What might have been without this pressure.”

“I think it’s something everyone can relate to. Caring isolates people, whether they are caring for a child or someone with Alzheimer’s,” says Stephens. “It means you live a different life, different from the life you thought you would live, and different from other people’s lives. It’s why Bri is such an acerbic angry man. He feels as if his life and marriage have been stunted and it makes him angry. You might think at first that he is this daft guy who makes jokes, but Nichols loads the journey and the brilliance of the writing in the way he makes you see all his pain, anger and confusion about what has happened to his life. I really want to do him justice.”

A Day in the Death of Joe Egg runs at Trafalgar Studios until 30 November. If you book via Stagedoor before 5 Oct, you can get premium tickets for just £25.