Hadestown: Definitely not a love story

The National has always had better luck with musicals the more off-beat they have been.

Who could have predicted the success of the verbatim musical, London Road, focused on the Ipswich community living in the wake of the arrest of serial killer Steve Wright who killed five women? Back in 2003, Jerry Springer: The Opera must have initially seemed an unlikely proposition too for an institution with Royal in the title.

Hadestown, a sung through reworking of the Orpheus and Eurydice myth by American singer-songwriter Anais Mitchell, may not be as off-kilter as either of those previous shows, but it has an unassuming charm which is emphasised by director Rachel Chavkin. She successfully goes for tone and texture to disguise the lack of dramatic momentum. She cleverly ensures that it always looks a little homespun around the edges, as if it’s not really trying that hard.

It’s a deceit of course, Chavkin is the smartest of directors as she has proved on her work with experimental New York company The TEAM, her staging of Natasha, Pierre and the Great Comet of 1812 — both on and off Broadway — and her collaborations with Chris Thorpe. (By the way, their latest, Status, is at Battersea Arts Centre in early April next year, neatly timed to land just after we are due to exit the EU). 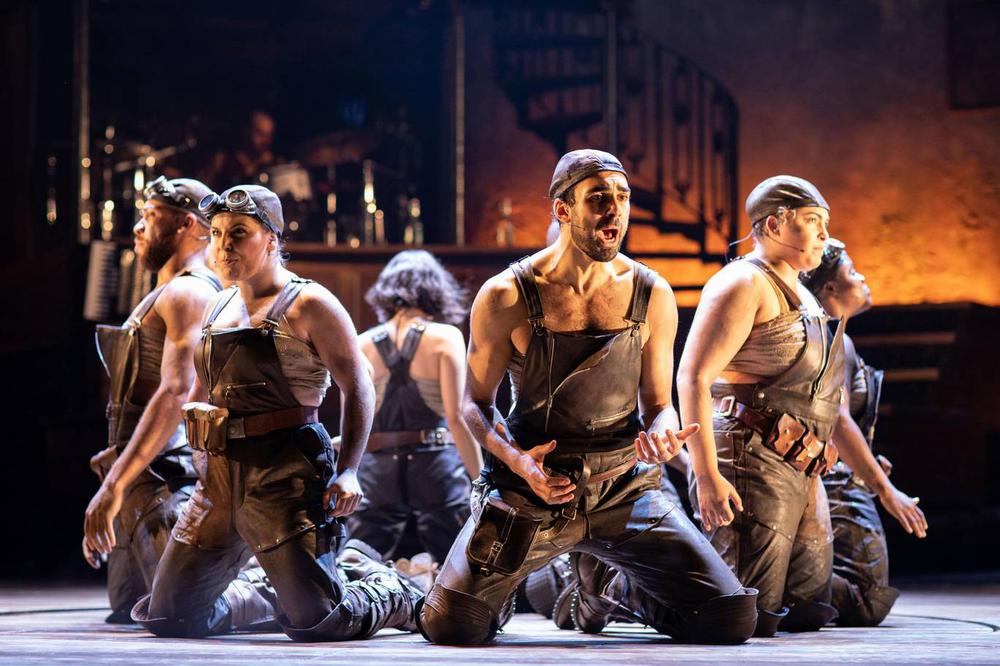 Hadestown at the National Theatre. Photo by Helen Maybanks

Chavkin, and designer Rachel Hauck’s trick is to plunder all the Olivier resources — including inventive use of the revolve — without making something small scale feel too over-blown. It fills the Olivier, but still feels pretty intimate. This is a musical which will appeal to fans of Once, it’s not an all singing, all dancing epic. But there is dancing, and David Neuman’s choreography has a compact power, particularly in the hellish underworld scenes in which the dehumanised workers operate like cogs in the industrial machine.

We begin in a downtown bar in listless Depression-hit America (although which Depression is left tantalisingly unclear) where a live band plays bluesy music to feed the soul and wandering singer songwriter Orpheus (Reeve Carney) first catches glimpses of Eurydice (Eva Noblezada), a girl who has spent all her life hungry.

Love may fill her heart, but can it fill her stomach too? Is it ever enough?

Particularly when doubt sets in in the dark. Anyway, who’d trust a penniless artist to bring home the bacon? Love is untrustworthy here in more ways than one, and there’s more than a touch of the stalker in the way this Orpheus pursues Eurydice. But then he’s too busy being creative and perfecting a song to notice that somebody else has got his eye on Eurydice too.

That’s Hades, the god of the underworld, here reinvented as a mine owner who offers his workers a Faustian bargain: a full belly and security in return for their labour and absolute obedience. Hades is played with creepy magnetism by Patrick Page who has a baritone voice which sounds as if it’s been dipped in molten lava from the very bowels of hell. Act One ends with an extraordinary anthem, Why We Build the Wall stuffed with Trumpian sentiments about building the wall “to keep us free”. 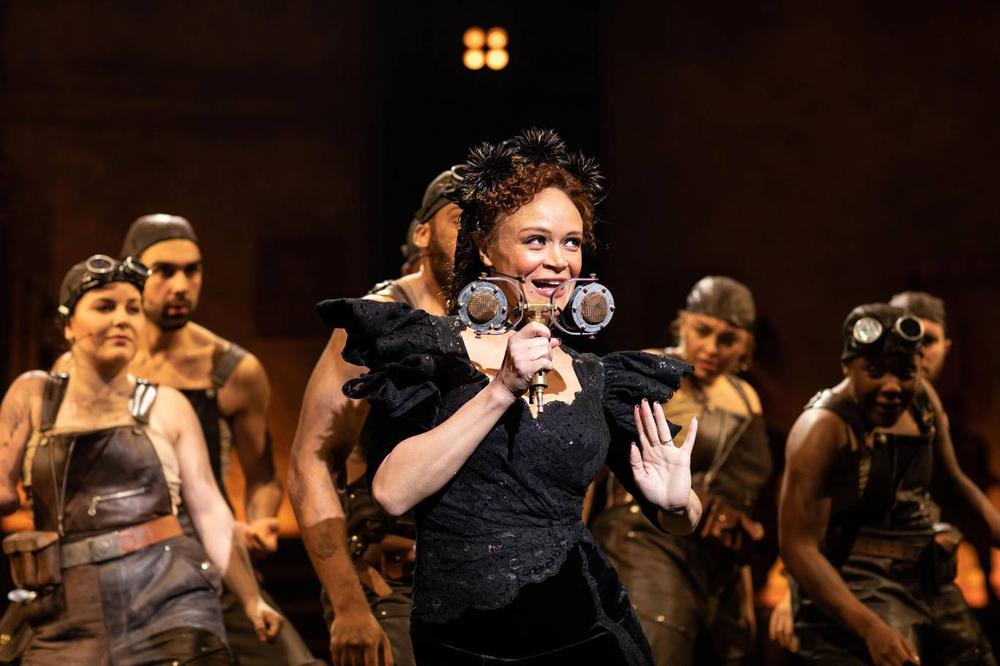 Hades, of course, is also a stalker: he has form in that department. He kidnapped his wife Persephone (Amber Gray) from the world above, only allowing her to visit her mum twice a year. No wonder she has taken to the bottle big time. Gray is compelling, a Persephone who woozes across the stage in a haze of brittleness, brio, savagery and sadness. Now Hades wants Eurydice too (cue a great number Hey, Little Songbird), not for sex but just because he’s the kind of man who likes power and control. The snake that bites Eurydice in the original story here becomes the rattle snake of coins seductively clattering together.

There are lots of neat touches like that, including the way that the Persephone story offers a light touch aside on climate change, how the fates are a trio of colluding backing singers with less than sisterly sentiments towards Eurydice, and the mournful brio of Andre de Shields’ slinky Hermes who operates as our guide  reminding us that this story is “a sad song, but we sing it anyway.”

We do, but it’s not quite as sad as it thinks it is. The relationship between Carney’s spikey-haired, toothy-smiled Orpheus, who always seems more of an X-Factor wannabe rather than a singer who “makes stones weep”, and Eurydice is too sketchy to really move us. Even when she is lost to him not just once but twice over. While it’s interesting to bring the marriage of Persephone and Hades to the fore, offering a parallel to the younger lovers, it can’t help but end up looking as if the show is desperately trying to romanticise what is clearly a coercive relationship. This is definitely not a love story. 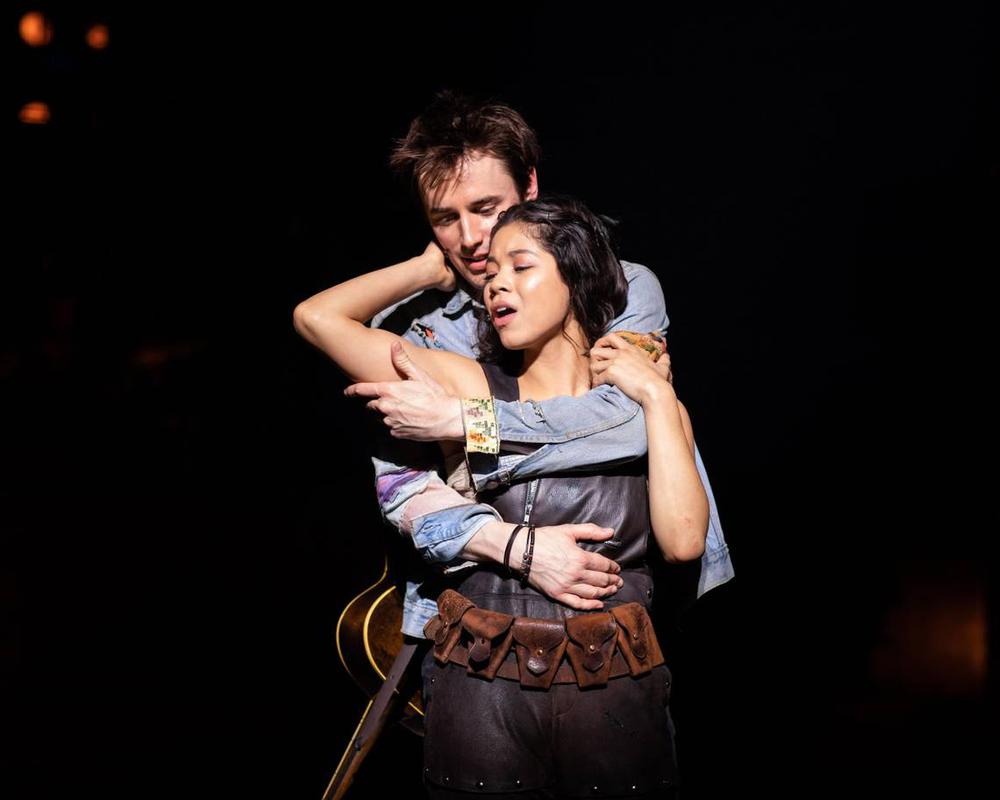 These dramaturgical deficiencies can’t be over-looked, but what this show does triumphantly is to demonstrate the power of music to move us in a way that Carney’s Orpheus never manages. Michael Chorney and Todd Sickafoose’s gorgeous arrangements and orchestrations of numbers that range from folk to jazz, anthems to ballads give the evening the emotional ballast it needs. Chavkin’s smart staging and some fine performances do the rest. It may not be heart-stopping, but it’s never an evening to regret.

Tip: if you're interested to see director Rachel Chavkin's next show, Status, then you can add it to your save list in the app. Stagedoor will give you a helpful reminder a few weeks before it opens in the Spring so you don't miss out.