Double Review: The Canterville Ghost and The Wolf, the Duck and the Mouse

The special relationship is under threat in 'The Canterville Ghost' (Unicorn) when the thoroughly modern Otis family from New York take up residence in a mouldering country house.

The Wolf, the Duck and the Mouse

Canterville Chase is a ghoulish pile which comes complete with its own ghost. Not that this boisterous, rabble of a family believe in anything as silly as ghosts. They come from a country so progressive that they have no need of superstition. So, when the blood stain on the hall carpet refuses to budge and things start going bump in the night they come up with their own solutions (the Victorian equivalent of Vanish and WD40) much to the frustration of the ghost, Sir Simon Canterville (Paul McEwan). He is doomed to haunt the house because of his terrible crime and grisly death centuries ago. Only the riddle inscribed in stained glass offers a clue to his possible redemption.

Oscar Wilde’s story offers something a bit different for family audiences (7 up) and there are undoubted joys including magic consultant John Bulleid’s contributions that make glasses hover in the air and teacups suddenly appear. There are some nice performances too most notably from Annie Fitzmaurice as Canterville Chase’s dour and doomy Scottish housekeeper, and a great double act from Mae Munuo and Rose-Marie Christian as the terrible twins, Stars and Stripes. Safiyya Ingar brings depth to tom-boy and keen gardener, Virginia Otis, who may be able to make the dead almond tree flower. 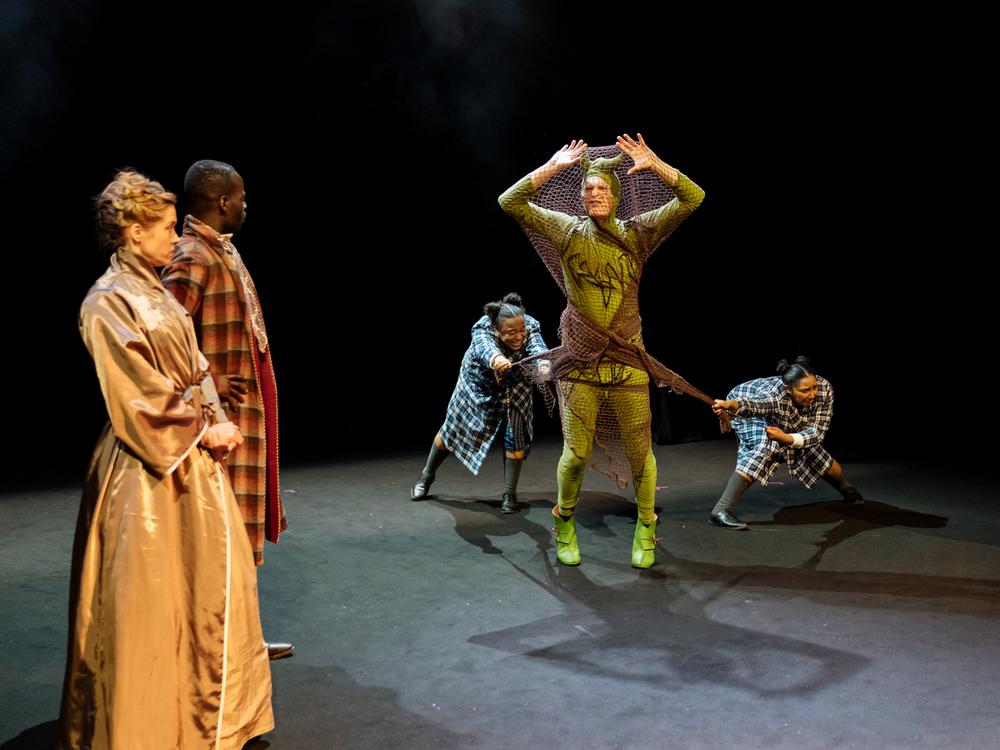 There is lots to like including Prema Mehta’s atmospheric lighting and Rosie Elnile’s design that has a music hall vibe which is added too by advertising interludes including the sawing in half of a child. On the downside Anthony Weigh’s adaptation is just too leisurely, and Justin Audibert’s production doesn’t quite marry the spookiness with something more raised eyebrow and ironic. The show outstays its welcome too which is a pity because it is in the final 20 minutes that it really becomes emotionally alert and sensitive as Virginia encounters the ghost who is damned to never rest.

What’s nice about The Canterville Ghost is that it doesn’t under-estimate it’s young audience and that is also true of The Wolf, the Duck and the Mouse, this year’s Unicorn offering for the younger members of the family. What Jack McNamara’s adaptation might do is underestimate that a lot of the appeal of Mac Barnett and Jon Klassen’s brilliant original picture book lies as much in its retro illustrations as in the story itself. 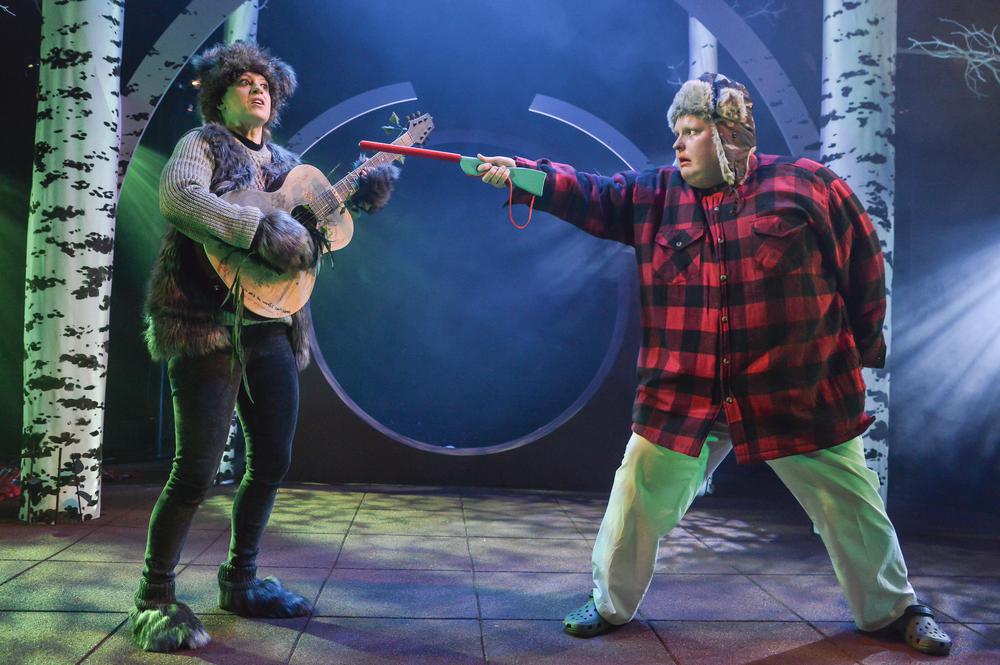 Samuel Buttery and Cath Whitefield in The Wolf, the Duck and the Mouse. Photo by Robert Day.

But McNamara’s production is full of playfulness and captures the absurdity of the original as it tells of a mouse (Varun Raj) who is swallowed by a starving wolf (Catherine Whitefield) and who instead of dying finds himself in residence in the wolf’s stomach alongside a Duck (Sam Buttery). The duck has adapted so well to his circumstances that he behaves as if he is living in a palace.

When children’s theatre so often treats animals as being fluffy and cute, the realism with which this hunt or be hunted world is portrayed is welcome, particularly as it is cut by humour and a clever twist as two dim human hunters start stalking the wolf. I enjoyed it and its sophistication, but reckon would suit the upper end of the age range (3-7) and would be a stretch for many three and four year olds.

The Canterville Ghost & The Wolf, the Duck and the Mouse both run at the Unicorn Theatre until Sun 5 Jan.