I wrote recently about the length of shows and how Londoners are falling out of love with the traditional length show.

Not Too Tame
Company

In their place, audiences seem increasingly keen on either epic experiences such as The Inheritance, or short, sharp shows like the brilliant The Arrival at Bush. The latter comes in at 70 minutes and allow you to go on and continue the rest of your evening elsewhere.

Two shows which have just opened in London, Cinderella at the Vaults and A Christmas Carol at the new Immersive LDN site, are bucking that trend with shows that offer a complete evening out in which theatre is but one component. I guess it is closer to going to see Mamma Mia: The Party at the 02 than it is to Master Harold and the Boys at the National. 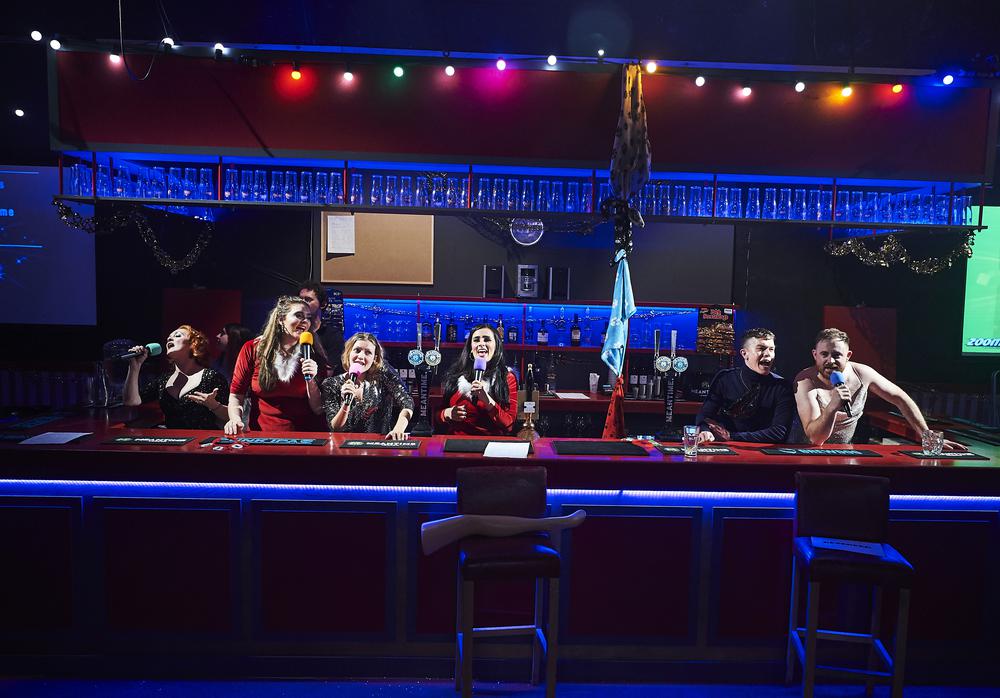 The Company of Cinderella

What is interesting about these shows is that they make different demands on both the performers and the audience. Cinderella turns the Vaults into a working pub, with the bar—open throughout the performance—centre stage.

Luke Barnes’ lively re-write of the traditional fairy tale is more Shameless than the Brothers Grimm as it relocates the story to a run-down boozer where the former owner, Cinderella’s dad, died in the middle of a karaoke version of My Way. Now Cinders (Rosa Coduri) is trying to keep the place going, and retain its heart and soul, while Dave’s widow, Judy Garland (Lizzie Hopley giving a brilliant performance of glammed up bitterness), and her wanna-be daughters are milking it for all they can get. Even Buttons, the pub dog (Patrick Knowles, terrific) is suicidal, but at least Cinderella has the cross-dressing Karaoke MC, Mike (Jimmy Fairhurst), looking out for her. Never before has a fairy godmother come with quite such hairy legs. 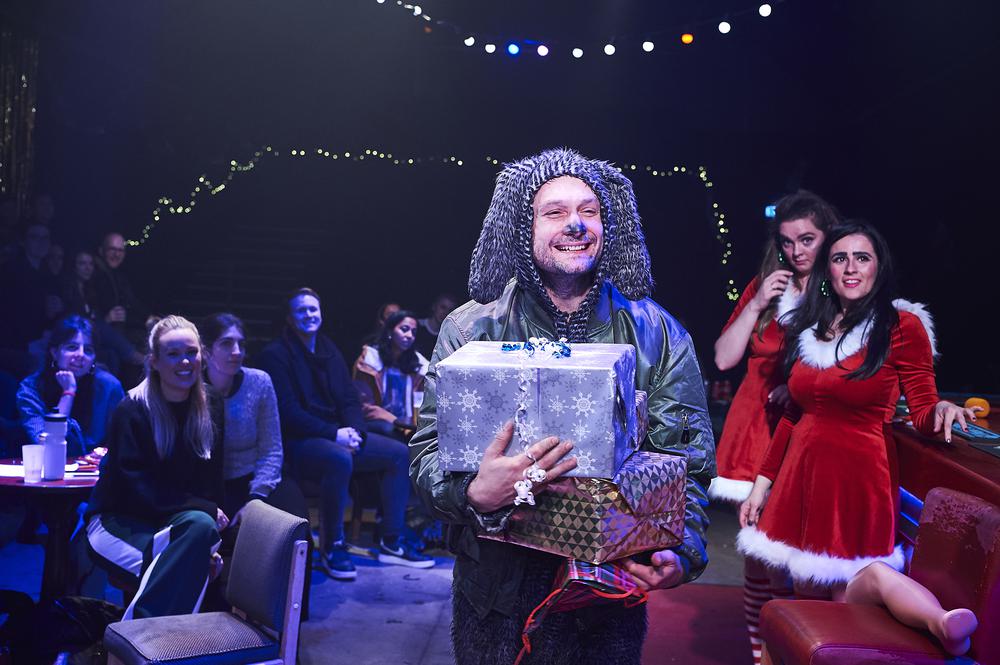 The story has some great touches—dad’s spirit haunts the fruit machine; the glass shoe becomes an orthopaedic slipper bequeathed to Cinderella by the Nan of a waster Prince Charming (Jack Condon) who knows her grandson needs to shape up and settle down. While the show is flimsy as gossamer it is also rip-roaringly alive. This is an evening made for the office party in which the storytelling is but the centrepiece of an experience full of fabulously bad taste jokes, copious amounts of alcohol and raucous singalongs to Bohemian Rhapsody and Voulez-Vous. It has heart.

It doesn’t do anything as rude as to treat the theatre component as incidental, but it does totally understand that for many people theatre isn’t a religion but can be an essential part of a good night out when it is removed from those scared cathedrals of art, we call theatres. Once the show is over you can karaoke the night away until you turn into a pumpkin.

The most food you are likely to bag at Cinderella is a packet of pork scratchings, but at A Christmas Carol at Immersive LDN the experience includes a full turkey dinner (or veggie alternative) including pudding. The food is genuinely tasty and there is plenty of it, but this is an evening that comes at a price (up to £71.50 at weekends) and putting a feast in the middle of the story disrupts the flow and is oddly situated before Scrooge has fully won his redemption.

Given the cost of tickets, Alexander Wright’s adaptation may be right to side-line the Cratchit family’s poverty for something that is perhaps less socially biting and more comedy-driven than Dickens’ original. There are some nice spooky moments, but it feels as if drama is playing second place to scoffing, and Scrooge’s Parlour lacks the all-enveloping design that would make this feel much more genuinely immersive. 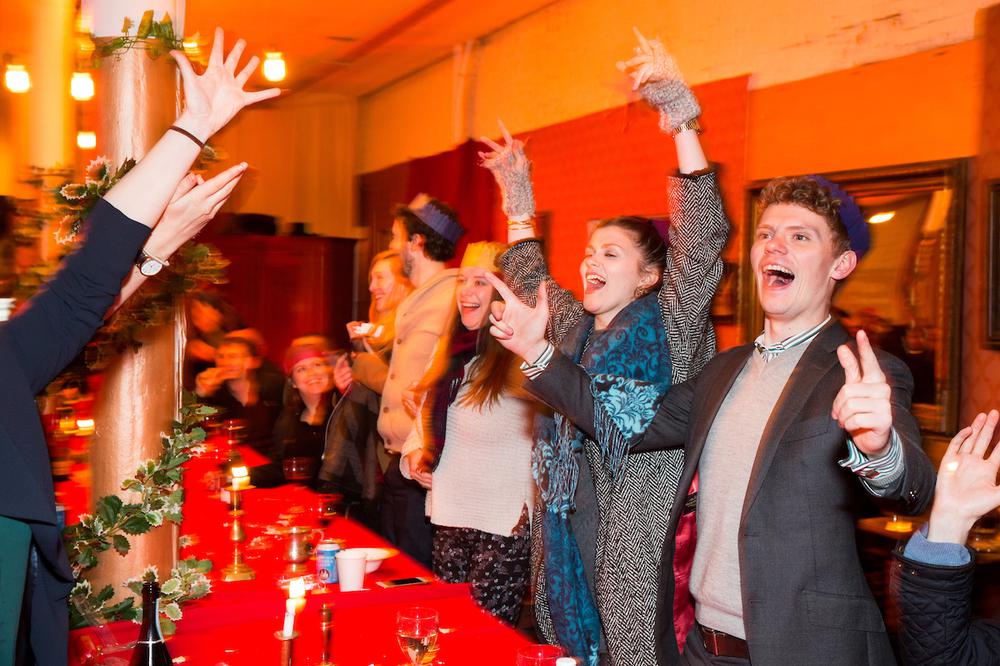 Guests at A Christmas Carol

Again, like Cinderella, it is an experience that is probably better enjoyed with plenty to drink and with a group of friends than solo. There are party games which are fun, and as a twinkly eyed Scrooge Alexander Barclay works very hard and to terrific effect to make everyone feel included. You can stay on after to drink at the bar, although you may say bah humbug to the prices. But you are in Mayfair after all.

A Christmas Carol runs at Immersive LDN until Sun 5 Jan.

Cinderella runs at the Vault Theatre until Sun 12 Jan. You can get tickets right here on Stagedoor.

As a part of our Black Friday deals, you can currently get £10 off any booking of £25+ that you make through through the app. You can apply this offer to Cinderella or any other show available via Stagedoor ⚡ Instant Book ⚡. Simply use code FRIDAYBLACK at checkout on the app!

You need to be quick though - the code expires at midnight tonight!