Prejudice, privilege and provocation — how Admissions is pressing people's buttons

There is generally quite a lot of consensus around theatre reviews, whether those reviews are written by traditional broadsheet critics or bloggers. There will always be the odd outlying opinion (I, for example, liked The Trick much more than many of my colleagues), but most reviews have an unanimity of response. That may well reflect the fact that most of the people writing about theatre, whether they are paid for it or not, tend to come from a fairly narrow strata of society.

So, it’s always intriguing when you come across a play where there is a vast range of sharply differing opinion about its merits and demerits. That’s exactly what’s happened with Admissions at Trafalgar Studios, the latest from American writer Joshua Harmon who previously pitched up in the West End with Bad Jews, a play whose title was sufficiently provocative to make TFL ban posters on the underground for fear might give offence. 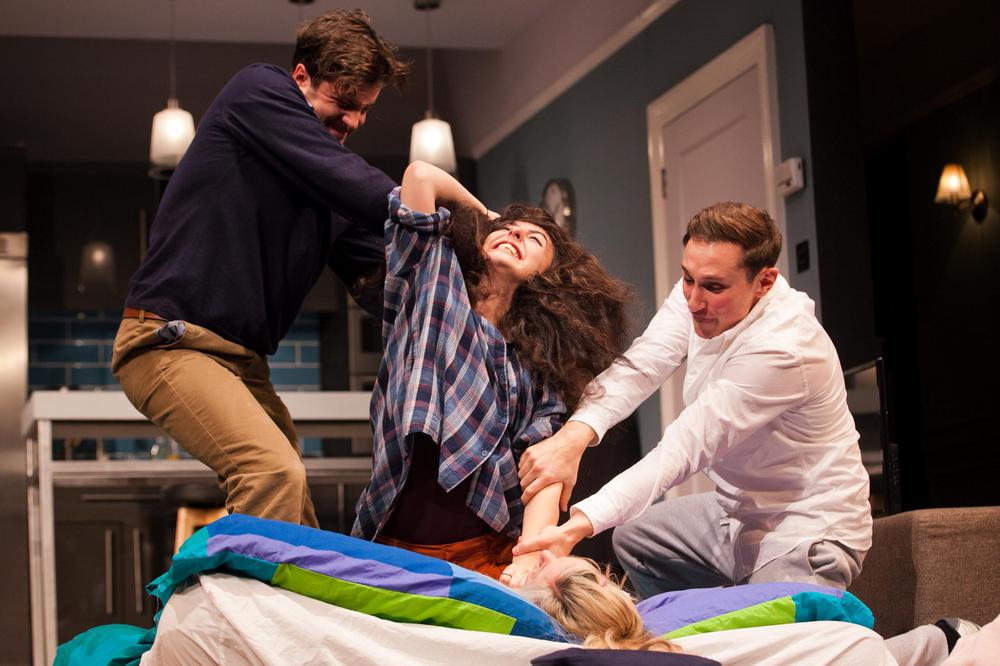 Admissions has had a swathe of reviews ranging from five-star raves to one-star pans. “A woeful American comedy,” declared Time Out, while the Sunday Times applauded loudly, with Quentin Letts delighting in this “punch to the kidneys for liberal snoots,” and praising it as “peppery, provocative, riveting stuff.”

The mere mention of the name Quentin Letts and the gap between the best and the worst of these reviews might make you think that opinion divides sharply down political lines. But wait! Here is Michael Billington in the Guardian arguing in an admiring four-star review that “the beauty of the play is that Harmon lays bare the hypocrisies of the liberal left through satirical comedy.”

Intrigued, I popped along to see the show which stars Alex Kingston as Sherri Rosen-Mason, the admissions officer at a swanky US prep school where hubby is head and who has spent her career trying to diversify the school’s student intake. Sherri talks the talk about widening access but when her own son, Charlie, fails to win an expected place at Yale, and his best friend, Perry—who is black—gets in, she finds it hard to practice what she preaches. 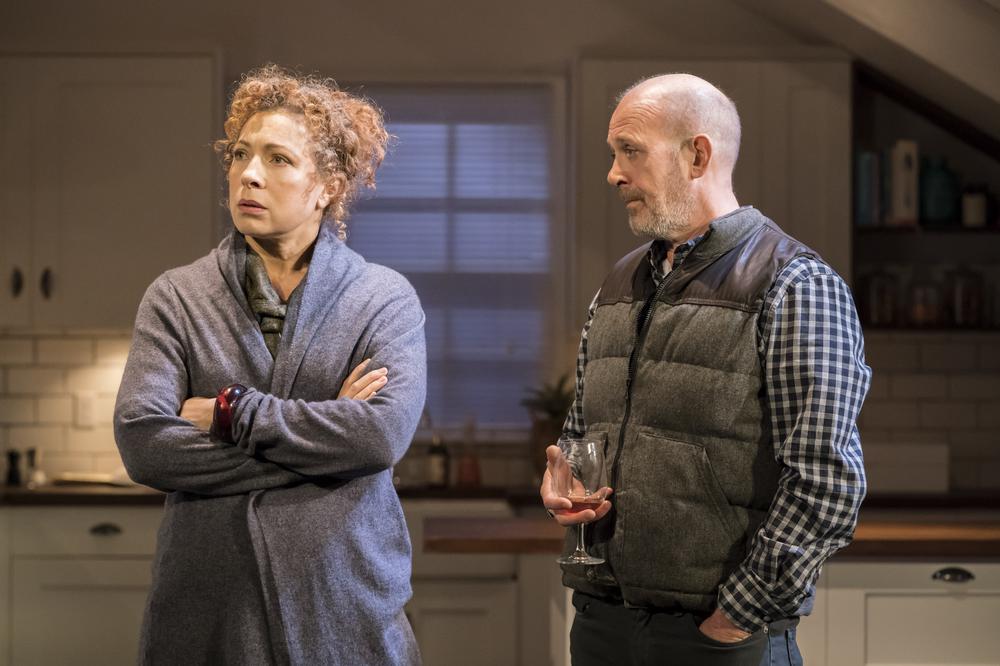 Alex Kingston as Sherri and Andrew Woodall as Bill in Admissions. Photo by Johan Persson.

In many ways the play reminded me of a better mannered version of David Ireland’s Ulster American which was a huge hit in Edinburgh last summer. This a play that is very deliberately aimed at a traditional liberal theatre-going audience who like their drama to be delivered with a big helping of meat. I was struck by the unusually animated audience discussions taking place on the way out. That’s also reflected in the reviews from Stagedoor users, who have tended to be significantly more energised by the play than many critics.

Maybe it’s because audiences quite enjoy having their buttons pressed. Admissions sits comfortably within a long tradition of American plays that delight in poking the audience with a stick to make them feel a wee bit uncomfortable. David Mamet’s Oleanna is a good example of that, and so is Bruce Norris’ Downstate currently at the NT. After all, you can hardly be more provocative than writing a play which toys with making an audience feel some sympathy for convicted paedophiles. 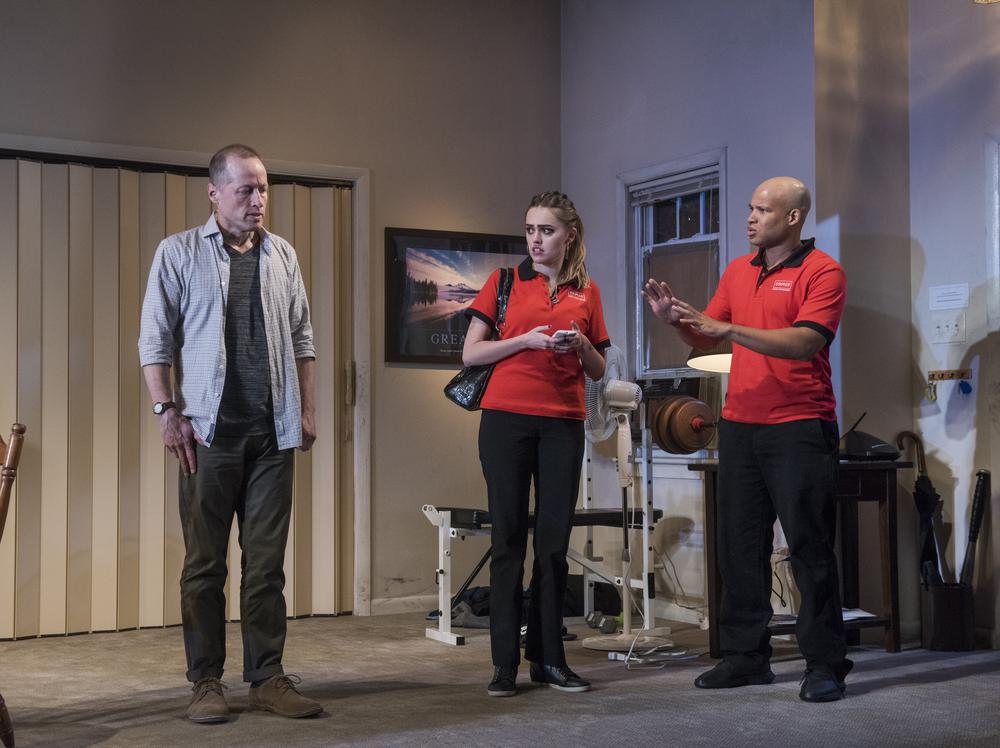 I suspect that if Admissions had landed in the West End just a few years ago, there would have been far more positive consensus around the reviews. Because for all its clumsiness of construction it is undeniably gripping as you watch the deeply flawed Sherri and her husband digging themselves deeper and deeper into a hole.

This is a play which knows its audience and it doesn’t let them off of the hook. On the night I saw it, a long tirade delivered by the teenage Charlie was greeted by horrified gasps by some in the audience and applauded by others. It is rather similar to what happens in Ulster American where the audience must decide whether or not they are going to be complicit, whether they are or are not going to laugh at rape jokes. In the case of Admissions, the waters are muddied further because the speech is delivered by American actor Ben Edelman, who plays Charlie, with all the flourish of an Olympic ice-skater executing a quadruple axel. Is the audience clapping the sentiment of the speech or Edelman’s virtuosity? 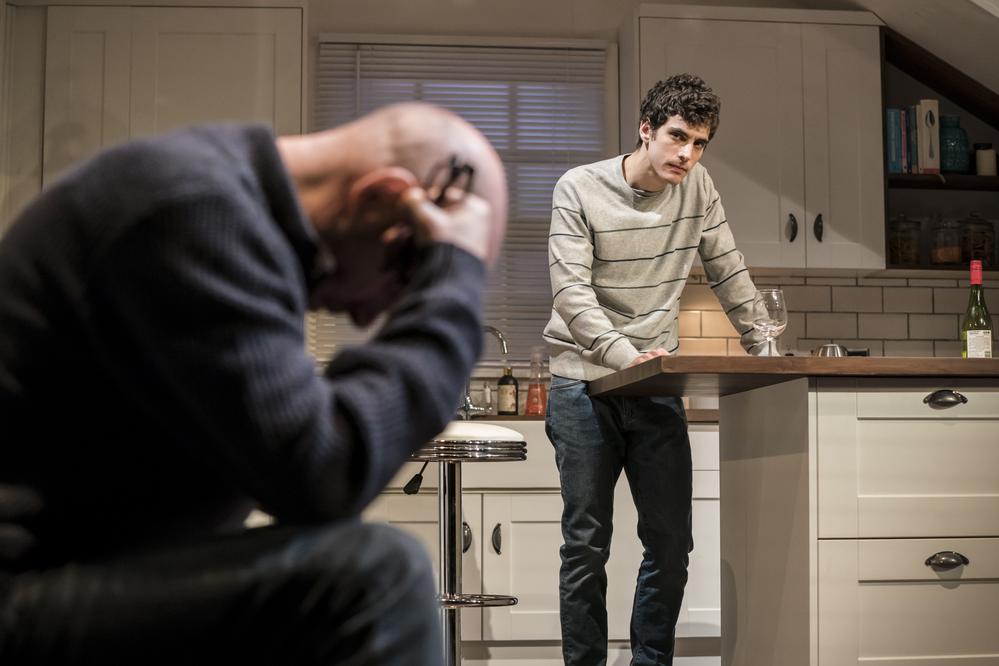 Ben Edelman as Charlie in Admissions. Photo by Johan Persson.

Admissions can’t escape its own straitjacket. It is a narrow story of white privilege, white power, white anxiety and white guilt. But it is a highly topical one as those who think of themselves as liberals—and that includes most of the theatre-going class—face up to the stark truth that while it is easy to profess commitment to equality and diversity, people act very differently when increasing equality or diversity suddenly directly affects them or their children. Acknowledging your privilege and letting go of it by stepping aside to let others have a seat at the table are two quite different things.

In Ancient Greece, going to the theatre was considered a civic duty because it was the crucible in which the quandaries and moral questions of the age were reflected back to society. Admissions is no Oedipus Rex or Antigone, but despite its specific American setting, it raises debate about the inequalities of opportunity that are also creating fissures throughout British society.

Perhaps that is why the critical response was so divided, and why audiences are so vocal. On the night I saw Admissions I left the theatre behind a young couple who, ten minutes later at Charing Cross station, were still fiercely discussing the play. When so much theatre is so entirely forgettable, that strikes me as something of an achievement.

Admissions runs at Trafalgar Studios until Sat 25 May. You can find tickets here.

If you've seen Admissions, why not share your perspective here?