Comedy of Errors: "From utter daftness to gut-wrenching seriousness."

When the RSC’s production of Comedy of Errors arrives at the Barbican this week, Londoners are in for a treat.

The Comedy of Errors

It’s a production which has been described as irresistible, and one that understands the need, after a prolonged period of unhappiness, for entertainment.

But although Phillip Breen’s revival maybe a crowd-pleaser, but it’s definitely not all froth. Emotional desperation is never far away. Shakespeare’s early play, inspired by a Roman comedy about a man whose long-lost twin bearing the same name arrives in town and is repeatedly mistaken for him, would be farcical in any event, but Shakespeare’s trick is to up the stakes until it becomes almost unbearable. He rachets up the mechanism of farce to breaking point by giving each of the long-lost siblings a servant. Like their masters, these servants are twin brothers who do not know of the existence of the other. The result is merriment, confusion and something more surreal too as certainty is replaced by panic. Think Long Lost Family with a darker twist.

Director Philip Breen reckons that Comedy of Errors is a play for today in many ways, not least because it is about a family being reunited after a long period apart. There is a woman who has been in lockdown and self-isolation for 33 years. In Stratford, where the play opened in the summer playing in the pop-up Garden Theatre , audiences and critics were quick top spot the parallels with our own experiences of family separation brought about by Covid. 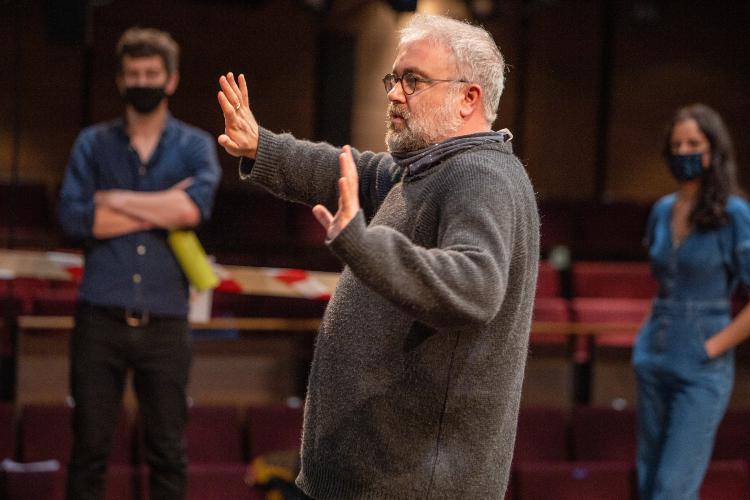 Philip Breen in rehearsal for The Comedy of Errors. Photo by Pete Le May.

But Breen reckons there are other things that make Comedy of Errors seem so very pertinent, not least because many of the characters find themselves in a place and situations “which looks like the old world with which they are familiar but which isn’t quite that old world. It’s like sitting at a piano that you know but someone has moved a few of the keys so it sounds roughly the same but it’s not the same.” That sense of discombobulation is something we are all experiencing at the current time when lockdowns are no longer likely but normal life as we knew it pre-March 2020 hasn’t yet returned.

Breen argues it’s not just the lockdown references which ensure that Comedy of Errors speaks directly to audiences today.

“At its root is a profound dive into the nature of the self and soul,” he says. Identity is at the very heart of Breen’s revival, one that piles on the comedy as the protagonists find themselves increasingly forced by events to question their own identity and sanity. As James Shapiro points out in the programme: “the word ‘mad’ occurs more often in The Comedy of Errors than it does in Hamlet, King Lear or any other work by Shakespeare.”

“There is a psychosis at the centre of the play for all of them because everything they want to be true isn’t true in reality and so as an audience you watch how close everyone is to chaos,” explains Breen. “The hysteria of this play when the world doesn’t agree with the very fragile coordinates of our own reality is a very profound comment on where we are now.” 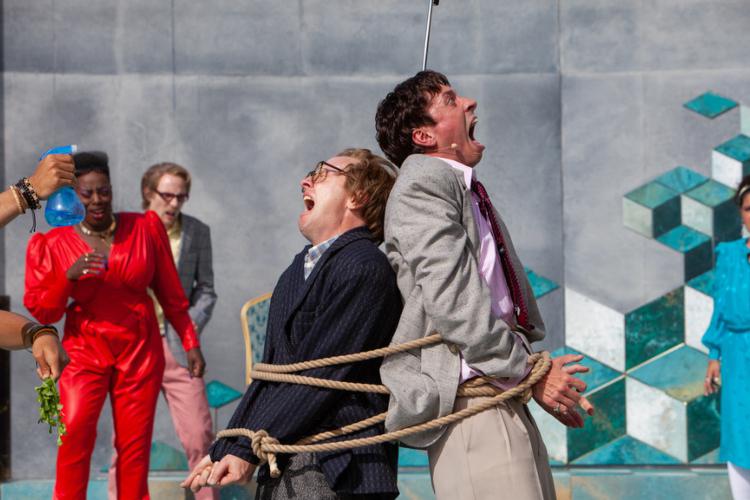 Photo by Pete Le May

Breen suggests that everyone in The Comedy of Errors only “has a bit of the story” and that “the truth is not much use if only you know it.” He points to how we see this being played out in social media every day with “hysterical positions being taken by people who have only tiny bits of the story but who think their tiny bit is the whole and only truth.”

If that makes the production sound very serious, that couldn’t be further from the truth: this Comedy of Errors is, by all accounts, hilarious. Breen has made his reputation directing comedy (including quite a few early comedies that previously had been considered quite unfunny by modern audiences) but says that the trick is always to play what is written.

“I don’t discriminate between a comedy and a play that is not a comedy. All plays are funny until they are not and that’s as true for Shakespeare as it is for Pinter. The problem is that people often direct the reputation of a play so you get this received idea that Macbeth must be done in a certain way when actually there is a Dog Day Afternoon humour about Macbeth, particularly in the first third and when he comes out with these daggers in his hand and he realises he hasn’t thought it through properly. Oedipus is funny from some points of view. “

He adds: “The last note I gave the company for Errors was that we had to have the confidence to go from utter daftness to gut-wrenching seriousness. The two work hand in hand. We do have gags, but they grounded in a close reading of the text. They are never layered on top; they bubble up from underneath. It makes them funnier.”

The Comedy Of Errors is booking until Friday 31 Dec. You can find tickets here.