All the dead voices: how are we remembering the Great War 100 years on?

In Beckett’s Waiting for Godot, Estragon and Vladimir talk about “all the dead voices” which they hear. The dead, they say, make a noise like wings, like leaves, like sand.

All the dead voices have been whispering and rustling over London’s theatre this week in the run up to the 100th anniversary of Armistice Day. At the Finborough the dead refuse to lie down in Irwin Shaw’s 1936 play Bury the Dead, revived with real verve, if not quite enough expressionistic fervour, by Rafaella Marcus.

Unlike the British playwright RC Sherriff, who in Journey’s End (1928) did for theatre’s depiction of war what Wilfred Owen had done in poetry, Shaw never served in the trenches. But Shaw grew up affected by the consequences of war. Bury the Dead is haunted by the absence of those who never returned. 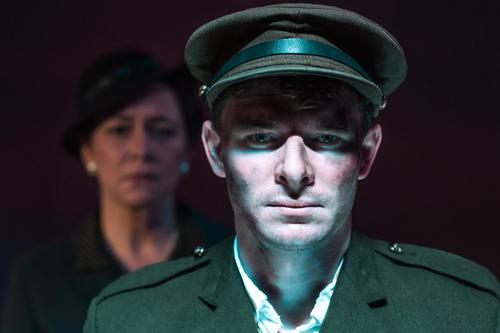 Sioned Jones and Tom Larkin in Bury The Dead. Photo by Scott Rylander.

What it does with startling immediacy is give visibility to the lost, and those erased from history, by giving them centre stage. Marcus marshals her large and excellent cast expertly, reminding us of the extent of the loss through the sheer numbers squeezed into a tiny space (which comes with a smart metal coffin design by Verity Johnson). Wherever you look you cannot avoid the accusing gaze of the dead.

This is an angry play about young men being sold to secure “four yards of bloody mud” and about how we prefer the dead to lie down, out of sight and out of mind. When the generals send for wives, mothers and sweethearts to persuade the dead to lie down, it becomes clear that the standing dead can be as much of an inconvenience for the living as they are for the Generals. In order to remember the dead, we need them to remain quiet as the grave. When all the dead voices keep clamouring for our attention, those left behind cannot get on with their living. 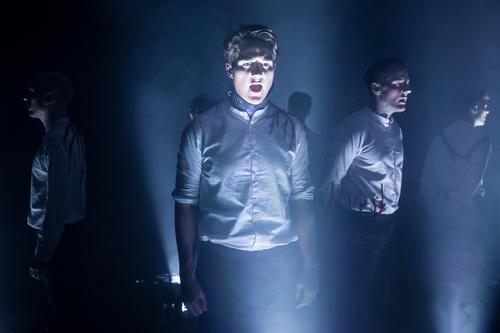 Bury The Dead at Finborough Theatre. Photo by Tristram Kenton.

One of the ways we get on with living is to erect memorials to the dead, a physical manifestation of the act of grief whose permanency stops us having to keep grieving over and over. The Uruguayan poet, Mario Benedetti, once said that “forgetting is filled with memory” but remembering through memorial is also part of forgetting. It does the job for us.

But what about those who have never been memorialised, but are simply erased from history?

During WW1 over 300,000 Chinese men travelled from China to Flanders to work for Britain and its allies behind the front line. Many died in the mud in France and many never managed to return home but there are no memorials to them. Daniel York Loh raises the dead and brings them vividly to life in Forgotten at the Arcola. This is clearly a labour of love and, if it is sometimes a little clunky in Kim Pearce’s production, it is also peopled with striking characters and it tells a story that we haven’t heard before, in a way which melds the Chinese tradition of opera with Western storytelling techniques.

You can’t help but be swept up in the stories of Old Six (Michael Phong Le), Big Dog (Camille Mallet De Chauny) and Eunuch Lin (Zachery Hing) who leave all they have known in their small Chinese village to embrace the future. There is a really terrific performance from Leo Wan as the teacher, nicknamed The Professor, who has a better grasp of the past and the present than his fellow workers - but is as blind to the future as everyone else. The play’s epilogue, set in post-war Paris, is a marvellous, moving piece of writing, and a stark reminder that ordinary people are always blown hither and thither by the tides of history, over which they have no control. 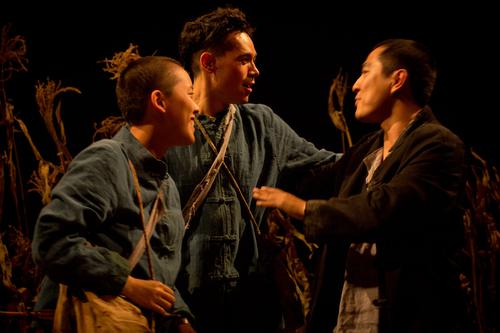 If Western powers could conveniently forget the contribution made by Chinese workers to the war effort, the British could be equally forgetful about the role of those from the former colonies. The best bits in Billy Bishop Goes to War (Jermyn Street) focus on the way the Canadian flying ace, who downed dozens of German planes, is treated by the British establishment. Either as a pet or a potentially dangerous mad dog. He is both lionised and patronised. The British government can’t quite work out if Bishop is more use to them dead or alive.

John Gray and Eric Petersen’s play can’t quite decide whether it wants to celebrate Bishop’s tendency to treat war like a jolly jape or make a comment about what a terrible thing war is. It was written over 40 years ago and it shows. Bishop is not always a particularly engaging character.

But director Jimmy Walter keeps it bubbling along, Daisy Blower’s design conjures clouds in a garden shed and there is something undeniably moving about seeing the Older (Oliver Beamish) Bishop and the younger man (Charles Aitken) side by side on stage, one all sad knowledge, the other all puppyish enthusiasm. The latter puts you in mind of Peter Pan’s cheerful observation that “death will be an awfully big adventure.”

It turns out that Peter Pan got it wrong in Benjamin Till’s stirring musical Brass, originally commissioned by the National Youth Music Theatre, and revived with military precision by Sasha Regan at the Union with the help of just a couple of wooden tables. Till’s story — of fine Yorkshire men who go off to war and are cut down by the stupidity of their own officers as much as by German bullets — is a familiar one. But his men are all members of a Leeds brass band, there is a beautifully understated gay relationship, and the women left behind — who worked in infamous Barnbow munitions factory (where my own great grandmother worked) — get as much stage time as the men. 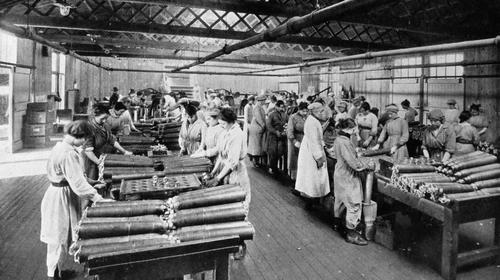 Women at the Barnbow National Filling Factory. Photo from The National Archives.

Till’s score is lush and plaintive and, if the first half drags, the second more than delivers as ghosts start to rise, letters home fly across the stage like paper airplanes, and the women take up their brass instruments where the men left off. This has a lovely cast whose sweet voices and shimmering youthful faces gradually become more bruised as the evening proceeds.

“They simply melted away,” says the Major in Brass, the commander of the regiment in which two-thirds of the soldiers were slaughtered in the first 20 minutes of the battle of the Somme. He speaks wonderingly as if he has witnessed an astounding disappearing act by a deadly conjuror.

On London’s stage this week, theatre’s nightly conjuring trick ensures that the dead walk again… You cannot ignore the clamour of all the dead voices. They demand to be heard; they force us to remember.

TIp: If you'd like to see Forgotten at the Arcola, tickets are available through Stagedoor's instant booking service. Tickets are at face value and it takes less than a minute to book when you use Apple Pay.