Sally Cookson’s devised take on Charlotte Bronte’s 1847 novel is up there with the very best.

It is a glorious riposte to all those who, like former New York Times critic Charles Isherwood, argue that page to stage adaptations of great novel are “dehydrated and reconstituted Readers Digest versions of literature denuded of the distinctive authorial voice and imaginative scope that gave them their status as memorable, sometimes life-altering works of art.”

We know from the RSC’s Nicholas Nickleby, or Shared Experience’s the Mill on the Floss and Emma Rice’s the Red Shoes that they don’t have to be like that.

Simon Goldhill, Professor of Greek at Cambridge University has argued while “to some degree all adaptors and translators are “traitors” some of these “traitors turn out to be liberators who let us recalibrate what matters and see the world from a startlingly new perspective.” Cookson’s Jane Eyre makes us see the novel—and the world—in new ways. It doesn’t reduce the novel to life support, but rather keeps its heart beating with renewed vigour, makes us look at it afresh. It is indeed a form of liberation. 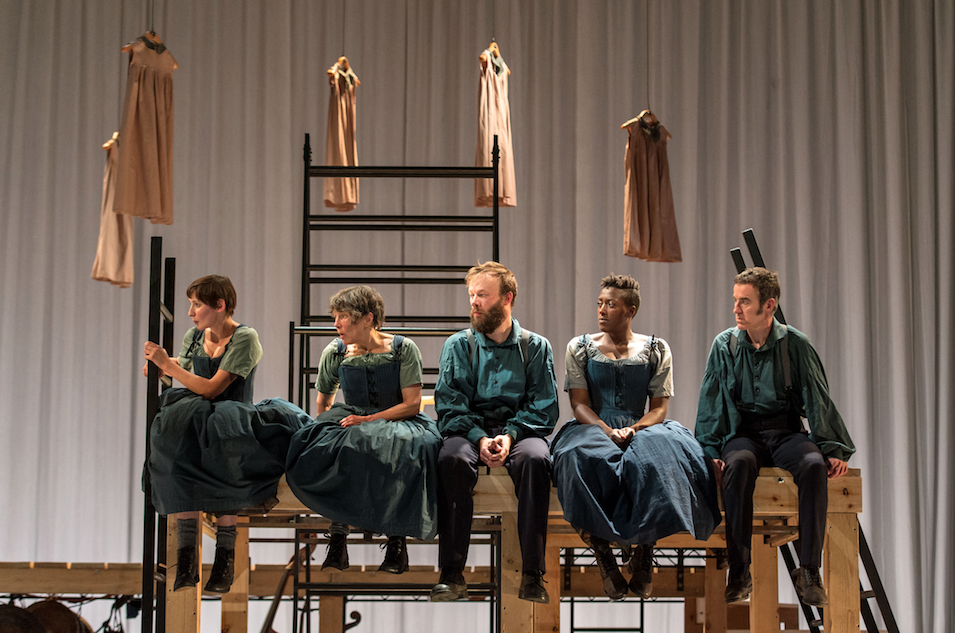 It puts imagination and inventiveness above faithfulness. Charlotte Bronte’s original definitely doesn’t begin with the words “It’s a girl!” but too often page to stage versions of classic novels get bogged down in an attempt to be faithful. But absolute faithfulness often doesn’t make for exhilarating theatre. Sebastian Faulks has talked how that adapting a novel for the stage is like trying to turn a painting into a sculpture, and of course that is a doomed enterprise if you are too literal. Don’t think of this as the filleted version of the novel but something in its own right that pays its respects to the original but alights magpie like on the aspects that interest its makers. It digs deep into the subtext of the novel and Jane’s subconscious and it strikes gold.

You don’t have to leave the house, but you will need snacks to hand as it lasts over three hours. But it gives you plenty of meat to sink your teeth into, even if you are vegan.

Madeleine Worrall is just so as Jane Eyre. I mean that as the mightiest of compliments. This is a performance of unpretentious generosity that captures Jane’s mix of intelligence and feeling, her intense yearning for something more than her life offers her. This is a performance that blazes very quietly but with such fiery fervour. “I’m no bird, and no net ensnares me: I’m a free human being with an independent will.” I described Worrell in a review of the original Bristol Old Vic production (that one lasted four and a half hours which makes the National’s three hours plus running time a snip) as being a Jane who was “part wounded sparrow and part fiery eagle.” 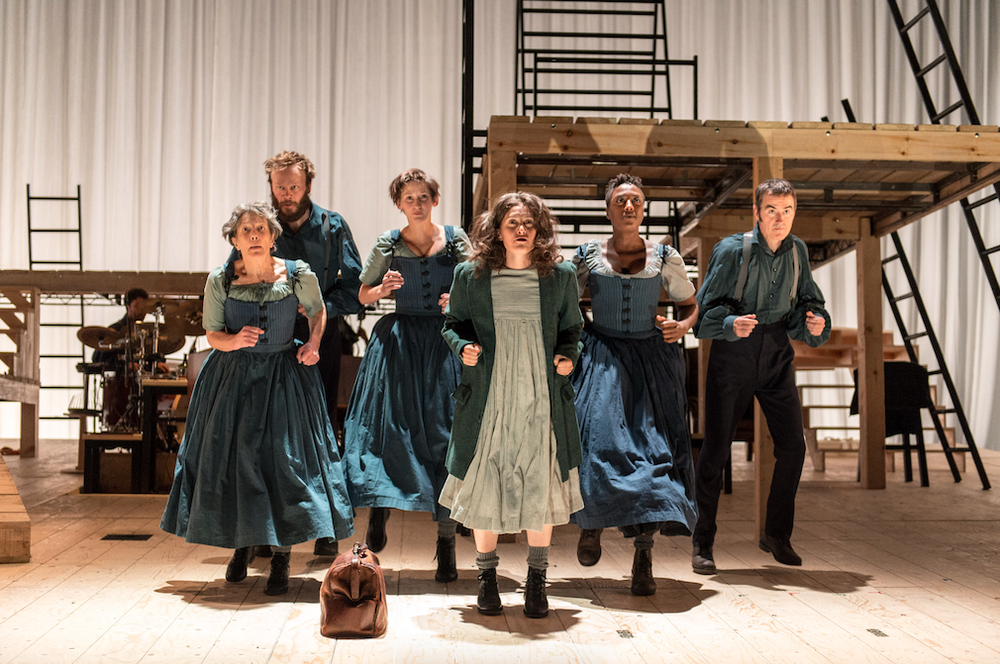 Madeleine Worrall and the company.

It will make you rethink the novel as a great love story, if that is how you saw it. Cookson makes us see it through feminist eyes and repositions Jane not as a woman looking for love but a woman looking for justice and fulfilment. “Do you think, because I’m poor, obscure, plain and little, I’m soulless and heartless? You think wrong,” she tells Rochester. It is the cry of the over-looked, the dispossessed, the under-valued and ignored all over the world. At a time when we are discovering that what you take home in your pay packet has nothing to do with your real value to society, this is a show that reminds that we need more Janes.

It looks great in Michael Vale’s design. Some of the playfulness of the stage craft and movement (a call-out for movement director Dan Canham whose 30 Cecil Street remains one of the most haunting things I’ve ever seen) comes from the playground nature of Vale’s design with its raised wooden platforms and ladders.

The whole cast are terrific and I particularly love Laura Elphinstone’s turns as the doomed Helen, the insecure horror that is Adela, and St John. It also has a performance from Craig Edwards that will make you paws for thought and puts a real wag in the tale. He plays Rochester’s dog, Pilot, and really, he should have won an Olivier for it as best supporting canine.

There is an absolutely heart-stopping moment when one of the cast sings Mad about the Boy. It shouldn’t work. It should grate. It should feel anachronistic. But it doesn’t. It breaks the heart and feels so perfectly placed. Just right. In fact, the music from musical director and composer Benji Bower is one of the absolute pleasure of this evening and the added bonus is Melanie Marshall’s performance as Rochester’s first wife Bertha, the original “mad woman in the attic” who is given a much needed voice and stalks the action in song. 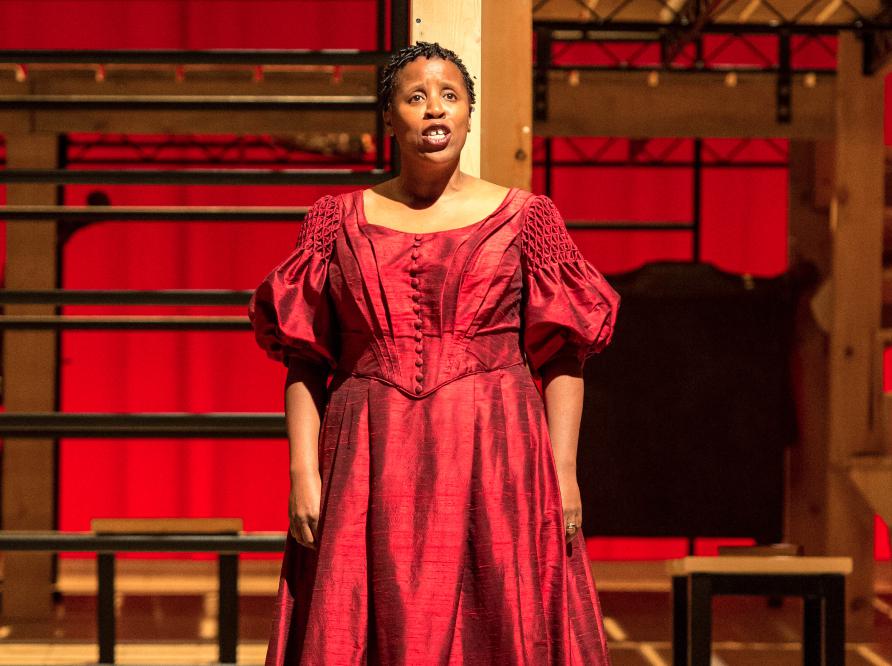 If you don’t know Cookson’s work, you should. She is a blazing talent but one whose career took quite a while to take off. Perhaps that’s because she has tended to work in areas that are under-valued and under-reviewed: children’s theatre (much of her early work was done with brilliant Bristol company Travelling Light); devised theatre, regional theatre, and adaptation. This is a show that demonstrates just how silly those hierarchies are and how they keep some creative people in their place. We’d be all the poorer if Cookson hadn’t broke through with productions including We’re Going on a Bear Hunt, Cinderella, a Fairy-Tale, Hetty Feather and more recent high profile productions including A Monster Calls at the Old Vic and The Lion, the Witch and the Wardrobe at Leeds Playhouse and subsequently seen at the Bridge in London last Christmas. Jane Eyre is a chance to get to know her work better. We should cherish her.

PS. If you watch, enjoy and want further reading let me recommend Samantha Ellis’ hugely enjoyable and enlightening How to be a Heroine, a brilliant consideration of the books that influence us growing up and how she and so many women yearn to be a Cathy (Wuthering Heights) when Jane Eyre is far the better model.