These Fringe legends have toured the world, broken America, established themselves on London’s West End, won numerous awards, survived a zero star review in The Times and are now ready for their biggest challenge yet: Hamlet Prince of Denmark.

Featuring a cast of professional Shakespearean actors, each night one lucky victim is selected and carefully intoxicated for up to 4 hours prior to show time. The remaining sober cast are then tasked with negotiating the play around whatever furious nonsense emerges from their drunken co-star.

Shitfaced-Shakespeare® is finally ready to tackle the greatest dramatic work ever committed to page in the English language, Hamlet. The story of a whiny lad who goes a bit loopy and does some stabbings. Sounds like comedy gold!

*subject to change on a show by show basis

A show that is enjoyable in parts, and one that will split audiences in terms of taste

Classically trained Shakespearian actors squander their talent on a puerile, booze fuelled interpretation of Hamlet. But it’s a bit of a laugh...isn't it? 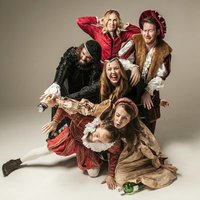