In a new production commissioned by the Finborough Theatre, 3 Guys Naked From The Waist Down returns to the UK for the first time in more than 25 years...

It’s the 1980s, and three guys – three very silly guys – aren’t nearly as famous as they think they ought to be. Comedy fame just isn’t happening quickly enough for charming Ted, rage-filled Phil and otherworldly Zen Catholic Kenny, until the three of them decide to form a team. Once united, the dizzying heights of late night chat shows, smash-hit TV sitcoms and international tours awaits.

But, as it always does, fame comes with a price.

It’s not easy living life naked from the waist down.

3 Guys Naked from the Waist Down is a 1980s comedy musical about 1980s musical comics. This funny, vulgar and quintessentially 1980s show traces through stand-up, sketch and song the rise of three young stand-up comedians chasing the American Dream in a world where there are no heroes left.

Written by veteran Broadway performers – composer Michael Rupert originated the role of Marvin in March of the Falsettos and Falsettoland, while lyricist and book-writer Jerry Colker was featured in the Broadway productions of West Side Story, Pippin and A Chorus Line – 3 Guys Naked from the Waist Down received its world premiere Off-Broadway at the Minetta Lane Theatre in 1985, starring Scott Bakula (Quantum Leap, Star Trek: Enterprise, NCIS: New Orleans), John Kassir (Tales from the Crypt, Pocahontas, JohnnyTime!) and book writer/lyricist, Jerry Colker. It won the Drama Desk Award for Outstanding Book as well as being nominated for Outstanding Music, Lyrics and Ensemble Performance, and has been seen across the world from Germany to Denmark to Japan. It was last seen in the UK at the Donmar Warehouse in 1989. 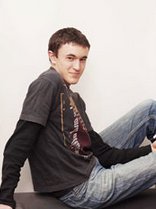