TWO TWO-HOUR PLAYS IN THIS EVER-POPULAR, ENTERTAINING, SPECTACULARLY DRAMATIC HISTORY-ON-STAGE SERIES!
INCREDIBLE INVADERS
The story of Britain from the Roman invasion in AD43.

The Celts are crunched when the Ruthless Romans invade Britain! Can crazy Caratacus save the nation? Hide behind Hadrian’s Wall! See the Savage Saxons smash their way in, and found their settlements and kingdoms. Find out who’s at Sutton Hoo! Will you survive the Vicious Vikings as they sail into the audience? Stop King Alfred burning his buns! Witness the Norman attack in the Battle of Hastings! It’s a thousand-year journey with Incredible Invaders!

GROOVY GREEKS
From savage Sparta to angry Athens, discover the truth about growing up in Greece. Take on the Trojans and the Horse, and pummel the Persians! Compete in the first ever Olympic Games, and appear in the very first play in history! Meet your match with the Minotaur and be zapped by Zeus, King of the Gods! Face the Persian hordes at Thermopylae, and shatter their ships at Salamis! Hold on tight as you gatecrash the Groovy Greeks through their great and gruesome history! 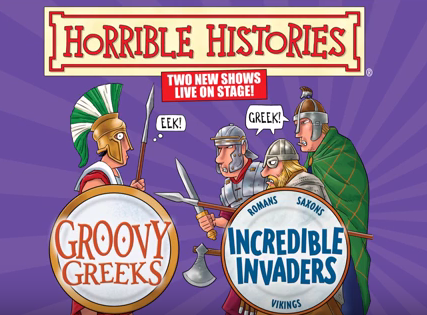