You might not use the word ‘hero’ but most of us have had someone in our lives so far that we held up and thought of as ‘special’.

Something they did, or said, or maybe something they ‘were’ makes us remember them. Revere them. Single them out amongst all others. Our lives are better for and because of them.

Some of you. Just some. Can even say that you are, or was, one of those people. A ‘hero’.

But let’s not be generalist. Not all ‘mothers’ are heroes. Or fathers. Or teachers. Or soldiers. Or firefighters…police officers…or doctors…

Not all celebrities that give fortunes to charity and volunteer in children’s hospitals are heroes.

The word is tainted somewhat: “Hero”. The myths, legends and fantasies, the archetypal demigod, or “great man” are distant, impossible dreams. And the villains? They’re not what you think either. The opposite of ‘hero’ is not ‘villain’, it is the bystander. The real bad guys are the people who do nothing.

This show is about that. It’s about you. And us. Together. A network of heroes in waiting.

Written and performed by Curtis Arnold-Harmer and Froud, directed by Robert Daniels, with animation by Georgie Howard Baker.

This project was developed with support from The Point Eastleigh, Redbridge Drama Centre, b- side festival, The British Council, The University of Chichester, and was funded by Arts Council England.

Please note, this show contains some footage and video imagery which some audiences may find disturbing. Age restriction: 14+ 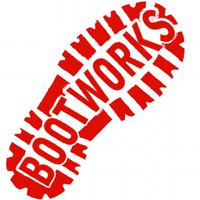 Bootworks
followers
‐ ‐
No user reviews
Be the first to review it