The town is small and much as you remembered.
Waves, and houses and people have risen and fallen.
You stand on the cliffs about the town and look out to sea.
There is a storm coming in.
On the horizon a ship is going down.
The vessel is taking on water, veering wildly to one side.
Deep in its belly there is a band playing.
A half-remembered song.
If you listen hard enough you can hear it still.
And the band plays on.

Set in a near future where the effects of climate change have reshaped the geographic and political landscape, it tells the story of a young woman returning to her small home town to find it the same as it has always been, and ultimately changed forever.

Utilising five actor/musicians to weave gig-theatre, spoken word, animation, puppetry and storytelling, we try and find a song worth singing even as the ship is going down all around us.

Developed with and supported by Strike A Light, The Other Room, The Bike Shed and Camden People’s Theatre. 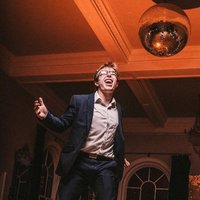